Why and how Bangladesh is moving forward? 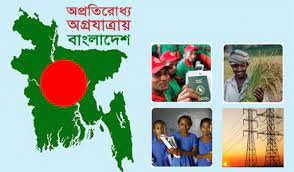 Bangladesh has improved its quality of life, economic strength and prosperity, education and research in every field. And that is why in the past Bangladesh was said to follow the developed countries to move forward, today the countries of Africa are being urged to look forward to that Bangladesh. No development in Bangladesh today is a surprise, but the result of systematic hard work. Today Bangladesh is reaping the harvest of thousands of days of suffering of millions of people.

Due to the global coronavirus pandemic, Bangladesh’s growth has slowed down. But where the growth of all the developed countries of the world was negative in these years, the achievement of Bangladesh was also noticeable.

Describing Bangladesh’s growth, the BBC said in its analysis that by 2035, we will reach the list of the 25 strongest economies in the world. Bangladesh’s economic progress is being compared to that of Singapore and Malaysia in the last century. Shijin Chan, former vice president of the Asian Development Bank (ADB), described Bangladesh as one of the fastest growing economies in the Asia-Pacific region. And GDP growth will be 6.8 percent this year and 7.2 percent next year. On the other hand, the country’s per capita GDP growth this year will be 5.5 percent and next year it will increase to 5.8 percent.

In 2015, Bangladesh was hailed around the world as one of the most successful countries in meeting the United Nations Millennium Development Goals (MDGs). Bangladesh did well in all the eight goals. Bangladesh has achieved 13 out of 33 sub-indicators to achieve these goals. One of the main aims of the MDGs is to achieve the goal of poverty alleviation.

The target was to reduce the poverty rate to 29 percent by 2015, while Bangladesh has reduced the poverty rate to 24.6 percent. In addition, education, gender inequality, infant mortality, maternal health, disease control, and a sustainable environment these are just some of the key indicators to develop.

It is not surprising that the milestone of being a middle-income country by 2024 may be missed, but mega projects like Padma Bridge, Karnafuli Tunnel and Metro Rail starting from the Century Delta Plan show that the dream of Bangladesh to be recognized as a developed country by 2041 is to be realized. Not a very unrealistic thought. But it requires an uninterrupted development environment and strong leadership. And this is why the development management of Bangladesh has become a role model for underdeveloped countries in all development agencies including the United Nations and the World Bank.

The matter has been made possible by following Bangladesh’s own plan or model. Although it emphasized the return of the digital Bangladesh system, it did mention in each case the economic empowerment of marginalized people.A number of initiatives have been taken to reduce the dependence on city-centric industries, businesses and income systems, ranging from credit assistance, training activities, counseling assistance to the marginal level. At the same time, by spreading ICT education to the marginal level of the country, a skilled population is being formed through technical education.

Even in 2010, Bangladesh, which is in an economic position close to Pakistan, has left Pakistan far behind in terms of GDP per capita and has become a rival to India. At present, the average life expectancy of the people of Bangladesh is 74 years, which is higher than that of neighbouring India and Pakistan. The average life expectancy in India and Pakistan is 70 and 68 years respectively.

Bangladesh is now a leader in the export of readymade garments in the world. Other cases are also moving forward. For example, the pharmaceutical industry of Bangladesh is said to be prosperous. There are 300 pharmaceutical companies in the country, which meet 97 percent of the local demand. They are even exporting drugs to the global market.

Bangladesh ranks eighth among the top 10 countries receiving remittances from abroad. In all, from January 1 to December 10, 2020, the country received $20.50 billion, which is about 12 percent more than the entire period of 2019. While the flow of remittances around the world has decreased due to the impact of covid-19, the World Bank has expressed the view that the income from remittances of expatriates will increase in Bangladesh this year as well.

A number of initiatives have been taken in the joint efforts of the Ministry of Expatriate Welfare, the Ministry of External Affairs and High commission offices, including providing comprehensive assistance to workers abroad and providing them with online passport renewal facilities. The expatriates are getting the benefits. At the same time, the Bangladesh government has created various opportunities for remittances and investment of expatriates through legal channels.

Through this, tens of millions of people of the country are benefiting. Not only that, Bangladesh has created new opportunities in the world labour market. Besides ordinary workers, Bangladesh is currently sending skilled workers abroad. At the same time, skilled experts in technology are also getting opportunities in the job market outside the country. About 700.000 workers were being employed abroad every year, but in the year 2020, 220,000 workers were employed due to Covid-19.

By 2030, Bangladesh wants to establish itself as a middle-income country, and the country’s ready-made garment sector is a very effective industry in this regard. The labour-intensive garment sector developed slowly in the 1980s. The garment industry is the largest export sector in Bangladesh. 83 percent of the total export income is coming from this sector (fiscal year 2019-20).

ICT is another important sector for receiving remittances in Bangladesh at present. There are more than 42 different projects under the ICT department. Through these projects, the Bangladesh government is helping young people to turn new ideas or technological ideas into business. Hi-tech parks and innovation centers have been set up to create technology hubs like Silicon Valley in the country.

Engineering and public universities are being prepared for research in this regard. Bangladesh is moving from a labor-dependent to a knowledge-based economy for the benefit of technological knowledge, and information technology is accelerating its growth. 100 million people in rural areas are being brought under broadband internet, which will create employment for 20 million people.

In addition, it is estimated that by 2021, the export of ICT products and services will be $5 billion. The IT sector will emerge as the second largest sector after readymade garments. As a result, gross domestic product (GDP) is expected to grow by more than 1 percent.

The agrarian economy has always been criticized by the Western world as fragile. But today Bangladesh has become self-sufficient in food due to its dependence on agriculture. Achieving self-sufficiency in food is one of the reasons why the global economic downturn and pandemic have not been had a major impact on the country’s economy. Food production has increased 4.75 times 1971 and now stands at 42.2 million tons (FY 2018-19).

In 2017-18 alone, it has produced 807.14 million metric tons of food grains. The agriculture budget is being increased day by day. Bangladesh ranks 4th in the world in rice production by inventing 108 high yielding varieties. It has provided agricultural inputs to 20,813,046 farmers.

Bangladesh is in the top three in the list of countries leading in achieving the Sustainable Development Goals (SDGs). Bangladesh is following all the models provided by the United Nations. At the same time, the country has its own goals. Implementation of Digital Bangladesh by 2021 is no longer a reality.

It is not surprising that the milestone of being a middle-income country by 2024 may be missed, but mega projects like Padma Bridge, Karnafuli Tunnel and Metro Rail starting from the Century Delta Plan show that the dream of Bangladesh to be recognized as a developed country by 2041 is to be realized. Not a very unrealistic thought. But it requires an uninterrupted development environment and strong leadership. And this is why the development management of Bangladesh has become a role model for underdeveloped countries in all development agencies including the United Nations and the World Bank.