Costs of declining the democracy summit 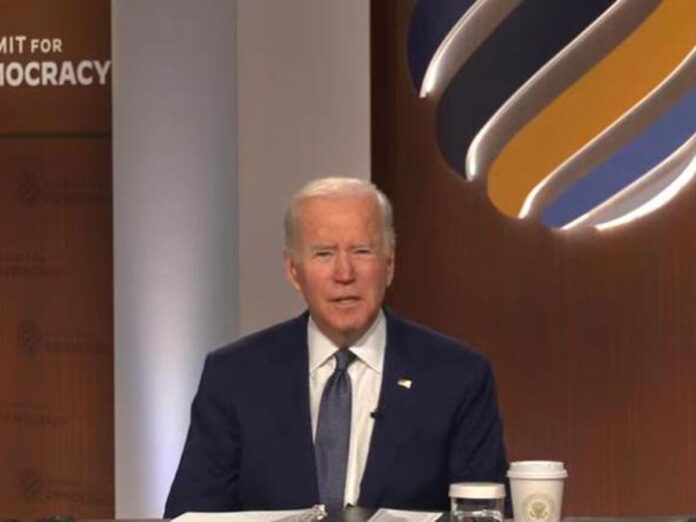 Since its independence in 1776, the USA had been a stable democracy, at least seemed so, but the January 6 riot at its Capitol put a giant question mark on the whole democratic enterprise. Of course, Donald Trump failed to bring the strong democracy to its knees, it was, nevertheless, a serious attempt to disseminate a disconcerting message —democracy is fragile despite its 242 years. Against this backdrop, President Joe Biden arranged a summit by inviting all democracies —strong, weak, and hybrid —around the globe. Pakistan, unlike Bangladesh, Sri Lanka, and Bhutan, made it to the invitee list but at the eleventh hour put paid to any chance of attending the virtual meeting.

A slew of contradictory statements came to light, thanks to the tactless approach of our officials. To put the whole saga in perspective, there were three reasons for which the government balked at attending the summit. First, since the rise of President Biden to power, there has been a sort of diplomatic snub of the PIT-led government for various reasons. A number of Pakistani officials have shown their desperation to have this glossed over despite the role Pakistan played in the Doha Talks; later, they stopped talking about the Biden call altogether when they saw no light at the end of the tunnel. In a sense, this decline was a response to the neglect —at least in part.

Second, China’s nexus with Pakistan has been lukewarm for two years now, and the former was uninvited to the conference too. Therefore, the possibility of the China factor behind this decision makes sense for the officials stated that Pakistan wouldn’t wish to be part of any bloc—though that was not any bloc. Third, some members of the government maintained that Pakistani democracy was strong enough on all counts so it didn’t need any lecture on democracy and human rights, let alone from a country that has a rich history of propping up despots, carpet-bombing countries, and dismantling democratic governments. Worse so, some officials argued, after the Jan 6 riot at Capitol Hill, the US should put its own house in order before lecturing others. George Friedman, however, in his latest book “The Storm Before the Calm,” tried to answer the inevitable transitional period of the USA—not decline.

Apart from all these reasons, from my vantage point, there is another aspect that has made the government reluctant to nod to the call for the meeting: embarrassment due to the declining democracy index reported by the Freedom House and attacks on press freedom which are widely reported at home and abroad. When the prime minister said the Pakistani media’s freedom was on a par with the British media, deep down his heart he didn’t mean it—to put it plainly. Reason: when he was in the opposition, not only did he vehemently oppose gagging the press, but he also promised to break the shackle of censorship. At best, he has changed nothing that the Nawaz government was doing. So if the media was under huge siege then, to take the PM’s stance, today, nothing is different from the past. Nevertheless, that’s how politics works in Pakistan.

Besides this, various neutral observers have degraded Pakistan’s points for democracy for patently manifested reasons. The prime minister isn’t fond of the democratic process either. For three years, parliament has been made a rubber stamp, and ordinances, which are an anathema to democracy, have been passed on end. Also, his examples of Saudi Arabia’s and China’s punishment of corrupts speak volumes. It is no wonder that both these countries are undemocratic, to say the least. There was no mention of South Korea given that its former president is in jail even to this day due to corruption charges. Granted that our omniscient prime minister doesn’t know much about South Korea, a single example from some democratic countries could also have sufficed.

On the one hand, the claim that Pakistan doesn’t take sides in the New Cold War between the US and China seems commendable, Pakistan’s tilt towards China says something else, on the other. Let’s have a thought experiment. What if China was in the US’s position and hosted a summit? It’s a foregone conclusion that there would have been no question of skipping. While saying no to China carries something unimaginable price, the US has brushed Pakistan’s “no” under the carpet. It doesn’t mean the US is a source of goodness. The US is far from being a source of ethical politics: it had shown pure realpolitik for most, if not all, parts of its checkered history.

It is beyond doubt that the most arduous task is to traverse the maze of diplomacy; as a result, diplomacy is known to be the proverbial art of possibilities. While the economy works as the backbone of a country, the foreign policy defines the very standing of a state at a global level. If International relations scholars are to be taken seriously for all practical purposes, the global system is anarchic. Today’s friend can be tomorrow’s enemy and vice versa. In the light of this aphorism, the move of Pakistan can be anything but calibrated, calculated, and considerate.

The authorities at the helm of affairs shouldn’t turn a blind eye to the fact that saying no to the US, slamming doors in the west’s face, and depending on one country—no matter how significant and sincere that country is—has consequences. Given that the IMF bailout package is around the corner, the economy is in shambles, FATF issues hover over us, and the Afghan crisis is deteriorating with each passing day, messing with Washington comes with a price.  If we can’t act like India as it is going to eat its cake and have it too by purchasing the US-banned S-400 from Russia and skipping the sanction, at least, we should act like Bangladesh, which has deep relations with both countries.

Whereas the USA used Pakistan at times and left in the lurch when the latter needed the former, most of such actions were mutually beneficial. Drones are a case in point. Indeed, without a robust economy, the relevance of this country will go to dogs because with begging bowl no one would listen to us. The Kashmir issue is a textbook case of the way the world works. Nevertheless, relations with any country shouldn’t sour, no less with the US who we need greatly.