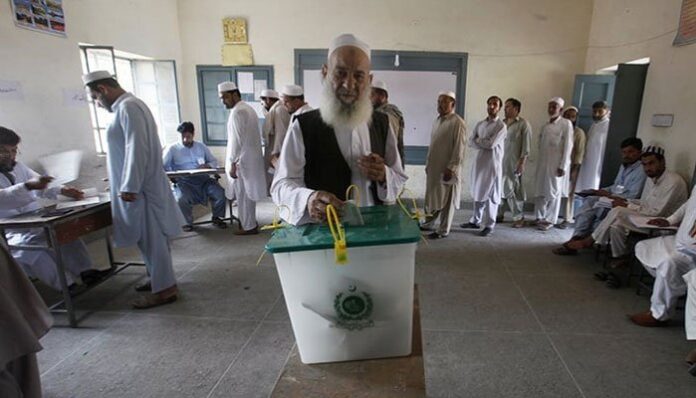 The Election Commission of Pakistan on Wednesday, issued notices to Provincial Minister for Transport Shah Mohammad Khan, along with his brother and his son for being responsible for polling station violence in Bannu.

The ECP took up a case for hearing regarding several polling stations being attacked and polling staff being kidnapped in the Bakakhel town of Bannu district. The district returning officer (DRO), returning officer (RO) and Bannu District Police Officer Shahid Imran were present in the hearing.

The counsel added that the police had registered a first information report against unidentified individuals instead of the minister and his brother.

Chief Election Commissioner (CEC) Sikandar Sultan Raja addressed the DRO and said it was a serious matter which would be taken to its logical conclusion. “If any government official is involved, action will be taken against him. If anyone tries to save the accused, they will not be spared,” the CEC remarked.

Reprimanding DPO Imran, the CEC questioned what could be worse than polling staff being abducted. “Abducting women from polling stations is a very serious matter,” Raja said.

He also asked the RO if he had gone to the scene to which the officer responded he could not as he was alone in his office and the route was dangerous.

The CEC asked about the security arrangements that were made if it was a “no-go area” to which DPO Imran replied that the polling stations had been declared sensitive and 400 security personnel had been requested, yet only 300 were provided.

He said no one was allowed to go to the sensitive polling stations without security personnel.

The DPO said 18 people had been arrested so far while some could not be apprehended.

It is pertinent to note that local bodies’ elections were held in 17 districts of the province on Sunday in the first phase of KP’s local government polls. The elections were marred by various incidents of violence.

As per the results, the ruling PTI suffered a major setback after the Jamiat Ulema-i-Islam-Fazl (JUI-F) candidate won the seat for the coveted post of Peshawar mayor in the first local government elections held in Khyber Pakhtun­khwa since the merger of tribal districts.

It is to note that the first phase of local government polls, marred by scattered incidents of violence and attacks that claimed five lives and damaged some polling stations, was held on Sunday in 66 tehsils of 17 districts after a gap of six years.

The polling process in three tehsils — located in Swabi, Bannu and Darra Adam Khel — was postponed due to disturbances, including a suicide blast in Bajaur, abduction of polling staff in Bannu, a clash in Karak and a mob attack on Minister Shibli Faraz’s vehicle in Kohat.