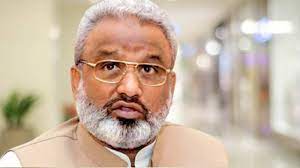 Addressing the participants of a protest sit-in organized by PTI at Phangario near Mithi on Wednesday. “As far as I have joined the PTI, the Sindh government has started taking action against innocent people of Tharparkar while fake cases are being registered against my colleagues, Dr Arbab Rahim said and vowed that people will reject the PPP in the upcoming elections.

Dr Arbab Rahim said today’s large gathering was proof that people had become aware of the dirty politics of the PPP in Sindh where police and private mafia had been used to harass the general public.

He said under the leadership of Prime Minister Imran Khan, Pakistan was on the right track of progress and prosperity adding that after use of the Electronic Voting Machines (EVM) no one will be able to gain power through rigging.

Arbab said if people wanted to get rid of PPP’s corrupt mafia, they should have to elect honest people during upcoming elections.

He said this sit-in was staged to record protest over high-handedness and injustices of PPP rule in Sindh as legislators of this party were involved in brutal murders of the innocent people.

Giving examples of some incidents occurred in Larkana and Thatta districts, Dr Arbab said provincial Assembly members were found to have been involved in the murders of innocent people.

He expressed hope that PPP’ s rule will soon come to an end and the PTI will form the next government in Sindh.

Earlier, on a protest call given by Dr Arbab Rahim, a large number of people holding party flags, placards and banners participated in the sit-in and chanted slogans against anti people policies and misuse of Police by PPP leaders in Sindh.