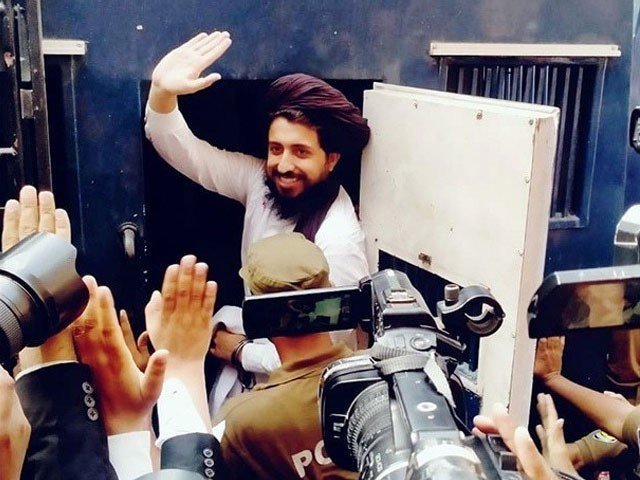 Tehreek-i-Labbaik Pakistan (TLP) chief Saad Hussain Rizvi stated that “No opposition will be able to function and no party will be able to make government without the support of the TLP,” as he went on to claim that his party’s vote banks in Punjab and Sindh had experienced a massive boost since the last general elections.

He further stated that “The TLP enjoys good support in both provinces and its vote bank has increased manifold compared to last elections.”

Rizvi revealed that he foresees his party as a “kingmaker” in the 2023 general elections by stating that its vote bank will likely get a massive boost in Punjab and Sindh, provided that the polls are held in a free and fair manner.

When asked about women joining his party, Rizvi said they were willing to giving as much as 50 per cent representation to women in the TLP.

“We will not only encourage women to join the party on reserved seats, we plan to bring them on general seats as well,” he stated.

Rizvi on other political parties approaching him following his release and the chances of the TLP forming electoral alliances with them stated that they were ready to talk to all parties. However, he added, a final decision on the matter would be taken after taking into consideration ground realities ahead of the elections.

Earlier on November 18, the leader of the radical Tehreek-i-Labbaik Pakistan (TLP) party was released from Kot Lakhpat prison in Lahore.

The TLP chief had been under detention since April 11. His release was said to be a part of an agreement reached between the government and the TLP following the party’s sit-in.

Rizvi’s release came a weak after the government removed him from the terrorism watchlist, paving the way for his release from detention under the deal to end weeks of deadly protests by his followers.

Rizvi, son of the late firebrand cleric Khadim Hussain Rizvi, was arrested on charges of inciting his followers and party activists to take the law into their own hands after, according to him, the government had reneged on its promise to expel the French ambassador over the publication of blasphemous caricatures.

His detention was scheduled to end on July 10 in light of a decision of the review board of the Supreme Court. However, the office of the deputy commissioner issued a fresh notification extending the detention for another three months under Section 11-EEE (powers to arrest and detain suspected persons) of the Anti-Terrorism Act.

On August 2, Rizvi, through his uncle, filed another petition with the Lahore High Court (LHC), claiming the government extended his detention with “mala fide intention”. He said it implicated him in 14 criminal cases following his detention.

Through the petition, Rizvi’s uncle asked the court to declare the extension of the detention period illegal and order his release. Two weeks later, on August 17, the court sought replies from the authorities on the request.

Subsequently, on October 1, the court declared as illegal the detention of Rizvi. Following the court order, the Lahore deputy commissioner, Umer Sher Chattha, also issued orders for his release.

But on October 11, the Punjab government challenged in the Supreme Court the high court order declaring Rizvi’s detention as illegal and directing the provincial government to release him immediately.

The following day, the Supreme Court remanded the matter to the high court for a two-member special bench to decide after hearing arguments from both sides.

His release is the result of the deal with the government, contents of which are yet to be officially disclosed, after which the latter agreed to free 2,000 detained members of the movement, lifted the ban on the group and agreed to let it contest elections.

In return, the TLP agreed to shun the politics of violence and withdraw a demand to have France’s ambassador expelled over the publication of caricatures of Prophet Mohammad (P.B.U.H.) by a French magazine, negotiators said.

The TLP took to the streets in mid-October, kicking off weeks of protests and clashes that killed at least seven policemen, injured scores on both sides and blocked the GT Road highway.

While speaking at a rally in Lahore on the occasion of his father and the TLP’s founder, Khadim Hussain Rizvi’s death anniversary three days after his release, Rizvi had urged people to vote for his party in the next general elections.