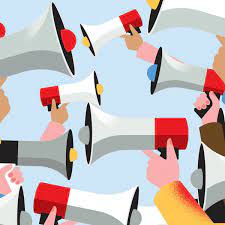 In the US, the media is juxtaposed with the executive, the legislative and the judiciary as the “fourth branch of government” and journalists are considered “uncrowned kings”. Though US media organizations claim to be independent from politics and serve freedom and truth, they are actually serving financial interests and party politics.

A few media conglomerates maintain control of the US news media and have morphed into a political force with outsize influence.

Under the Telecommunications Act of 1996, the federal government is required to relax regulation over the ownership of media outlets.

This has led to an unprecedented wave of mergers and a crippling erosion of the diversity and independence of the US media. The drastic reduction in the number of media outlets has enabled a few companies to expand into monopolies.

In the US, a few media conglomerates are now in control of over 90% of media outlets, netting them an annual profit even higher than the gross domestic product (GDP) of some developing countries.

These media behemoths, while eager to make more business footprints, have extended their reach into American politics, attempting to sway political processes through lobbying, public relations campaign or political donations.

The US media monopolies have become “invisible killers” of civil and political rights.

Robert McChesney, a leading US scholar in the studies of political economy of communications and professor at the University of Illinois at Urbana-Champaign, notes in his book Rich Media, Poor Democracy that media companies, profit-driven by nature, confine people to the world of entertainment programs, depriving their access to diversified information, distracting their interest in public affairs, diminishing their ability to distinguish between right and wrong, and muting their voice in the decision-making of social policies.

In an American society dominated by media narratives, traditional notions of civic and political involvement have shriveled. Depoliticization has turned democracy into a political game without citizens.

A report in Miami’s New Herald argues that as the media is controlled by the elite and conglomerates, people are not able to distinguish between facts and political propaganda.

The US media is no longer a “gatekeeper” of democracy. The political wrangling between the Left and Right in the US media has further entrenched the estrangement and division between the two parties and between the elite and the mass public.

It has aggravated political polarization in the US, pushing the political Left further left and the Right further right. And it has fueled the spread of extremist ideologies and populism in the US.

According to a study by Sejong Institute, a think tank in the Republic of Korea, over 80% of conservative voters in the US see news reports by mainstream media outlets, such as New York Times, as false information and have a biased trust in media.

Voters believe in only a few media outlets and would ignore communications at the national level. Levelheaded discussions and consensus-building have been replaced by megaphone politics and negative partisan strife.

The Digital News Report 2021 issued by the University of Oxford and Reuters Institute indicates that among 92,000 online news consumers surveyed in 46 markets, those in the US have the lowest level of trust in news, a mere 29%.

In the information age when traditional media is on the decline, social media has become a new favorite for the general public.

Yet, like traditional media, social media is also under the control of big capital and interest groups. To increase their website traffic, social media sites use algorithms to create “information cocoons”, leaving extreme content unchecked and uncontrolled. This drives users toward self-reinforcing their existing views, exacerbates identity politics, and further divides public opinion.

In October 2021, former Facebook employee Frances Haugen leaked tens of thousands of pages of explosive internal documents of Facebook. She disclosed to Columbia Broadcasting System (CBS) that Facebook would not hesitate to sacrifice public interests to keep users on its platform and make profits.

Facebook has become a main platform for social extremists and is fraught with hate speech, disinformation and misinformation. Action is only taken on 3-5% of hate and about 0.6% of violence and incitement on the platform.

Author is a Chinese scholar on International Affairs