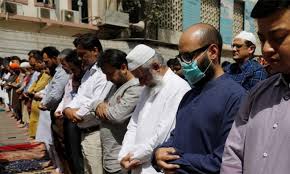 The government of Sindh has made vaccination mandatory for people offering prayers in mosques, in order to curb the COVID-19 cases.

In line with the National Command and Operations Centre’s (NCOC) directions, the Sindh Home Department has issued a notification on Friday listing revised COVID-19 protocols for mosques.

As per the notification, “only fully vaccinated individuals are allowed for prayers in masajid to avoid risk to others.”

The notification added that all worshippers will be required to continue wearing a face mask when praying inside mosques. Adding to that, carpets will have to be removed from the floors of mosques, while adequate ventilation has to be ensured for indoor prayer gatherings.

Sindh Chief Minister Murad Ali Shah stated that 6,686,895 tests had been conducted in the province against which 473,750 cases were diagnosed, of which 97.1% or 460,136 patients had recovered, while adding that 5,995 patients were under treatment, of which 5,794 were in home isolation, while 12 were admitted to isolation centres and 189 at different hospitals.

It is pertinent to note that as of November 25, Sindh reported 43 new cases of COVID-19 in the province after 6,468 tests were conducted. However, no deaths were reported.