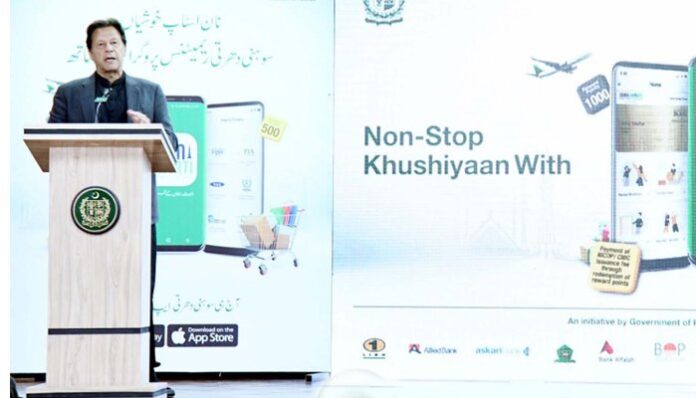 ISLAMABAD: Prime Minister Imran Khan has emphasised on incentivising overseas Pakistanis and providing them VIP treatment for their remittances.

Khan said nine million overseas Pakistanis are immensely contributing to the country’s economy. He said the government appreciates their role in bridging the gap between exports and imports of the country. He thanked the overseas Pakistanis for posing confidence in the bright future of their homeland by sending record high remittances of over $29 billion during the last fiscal year of FY21 and continuing the trend in FY22.

He said, “We are determined to extend all possible facilitation to overseas Pakistan to encourage them to send their money through banking channels.” He said that overseas Pakistanis can now buy houses and invest in real estate through the Roshan Digital initiative.

The prime minister said the government is working on a plan to give overseas Pakistanis concessions in taxes as well. The prime minister congratulated the State Bank of Pakistan (SBP), Ministry of Finance, financial institutions, participating public sector entities (PSEs) and all other stakeholders and said without their efforts the launch of this remittance incentive programme would not have been possible.

He termed the launch of SDRP as a tribute to the Pakistani workers abroad who have been contributing in the development of the country through sending their hard-earned money back home. He also appreciated the concept of giving incentives through a digital application for sending remittances via official channels.

Speaking on the occasion, Adviser to the Prime Minister on Finance and Revenue Shaukat Tarin said this programme is a thanksgiving to overseas Pakistanis. He said earlier banks were rewarded for bringing remittances to the country but for the first time overseas Pakistanis will get benefit by scoring points in the app.

In his address of welcome, SBP Governor Dr Reza Baqir expressed heartfelt gratitude to the prime minister for his continuous interest and guidance in developing ways to facilitate the overseas Pakistanis and workers abroad.

Dr Baqir elaborated that the Sohni Dharti remittance programme is another outcome of the PM’s vision. Referring to earlier initiatives, he said, Roshan Digital Account and the Naya Pakistan Certificates have been huge successes and the PM’s support has played an instrumental role in it.

Other initiatives like the Mera Pakistan Mera Ghar Scheme, providing low-cost housing finance for the first time to home owners is another example where the PM’s vision and support has led to a significant takeoff of housing finance in the country, which had otherwise been negligible.

Dr Baqir said that he was delighted and privileged to announce the launch of SDRP, which is an excellent combined effort of the government of Pakistan, central bank, financial institutions and other organisations.

He said all home remittances sent from anywhere in the world through legal channels are eligible for inclusion in the SDRP. Besides, the funds received in the Roshan Digital Accounts, which are consumed locally through conversion, and; thus, become non-repatriable, also qualify for the inclusion in the programme.

The SBP governor termed the launch of SDRP another step towards digitalisation and financial inclusion that would play a significant role in the digital onboarding of the overseas Pakistanis and their beneficiaries in Pakistan. The mobile application of SDRP is available at both Google Android and Apple IOS platforms. He also appreciated the participating banks, PSEs and other stakeholders, in this regard, as it was due to their hard work that this initiative finally saw the light of the day.

The present government has always encouraged and appreciated the efforts of the overseas Pakistanis through various initiatives and programmes, such as making remittances transfer free-of-charge, providing free airtime for remittances received through mobile wallets and covering marketing cost of remittance service providers.

This is an innovative programme designed to incentivise the overseas workers abroad to send remittances to Pakistan through banks and exchange companies and earn reward points. These reward points could then be used to avail different benefits offered by the partner organisations. SDRP can be accessed conveniently from anywhere in the world through a mobile application.

ISLAMABAD: The opposition in the National Assembly on Thursday announced its decision to boycott in protest to "persistently authoritarian" government approach the in-camera briefing...
Read more
NATIONAL

The head of a team of veterinarians called for urgent medical care for a pair of elephants in Karachi. Dr. Frank Goeritz, whose team was...
Read more
NATIONAL

ISLAMABAD: A peacekeeper from Pakistan Army, Havaldar Muhammad Shafiq, who was serving with the United Nations mission in the Central African Republic (CAR) and...
Read more
- Advertisment -

December 2, 2021
ISLAMABAD: The opposition in the National Assembly on Thursday announced its decision to boycott in protest to "persistently authoritarian" government approach the in-camera briefing...