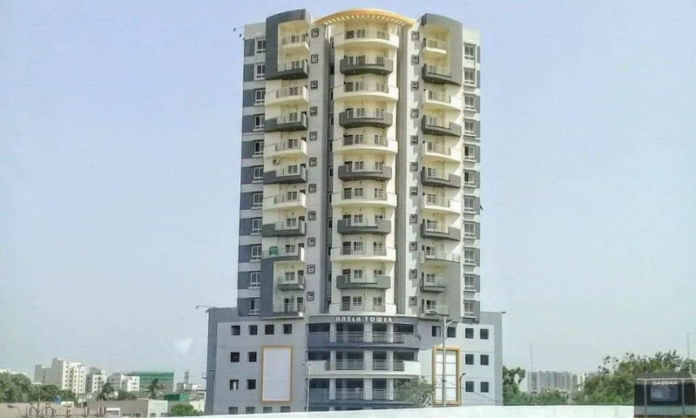 KARACHI: Karachi administration has taken over Nasla Tower on Thursday, resulting in the residents demanding assurance from the Supreme Court of Pakistan that they will be fairly compensated for their losses.

Earlier, The Supreme Court of Pakistan had given directive to demolish the building, as it had been constructed illegally.

Soon after the orders by the SC, the residents expressed their dismay over the decision. They said that they have qualms about the compensation as neither the builder nor the city administration was ready to compensate them for their losses.

“So far, no one has contacted us for the compensation money,” a resident stated.

On the matter, Deputy Commissioner Karachi East Asif Jan Siddiqi stated that the after the deadline to vacate the illegally-constructed building had expired, the administration had now taken control of Nasla Tower.  He added that the Karachi commissioner has sought bids via advertisements to have the building demolished.

The manager went on to reveal that eight flat owners reside abroad and could not be contacted. So, he requested the authorities to give some time extension so that those living abroad could be contacted, and shift their belongings to some other place.

Earlier, the Supreme Court (SC) had given directive to the Karachi commissioner on Monday to demolish Nasla Tower, a 15-storey residential building located at the intersection of Sharae Faisal and Shahrah-i-Quaideen, through “controlled blasting” within a week and submit a report.

The court had given instructions to ensure that no harm was caused to other buildings and persons in Nasla Tower’s vicinity because of the blast.

The matter was taken up by a three-member bench, headed by Chief Justice of Pakistan (CJP) Gulzar Ahmed and comprising Justice Ijaz-ul-Ahsan and Justice Qazi Muhammad Amin Ahmed, at the SC’s Karachi registry, where the city commissioner appeared before the court.

It also directed the builder of Nasla Tower to refund money to registered buyers of the residential and commercial units, adding that the city commissioner should ensure that the refunds were made.

A three-judge SC bench, led by Chief Justice of Pakistan Gulzar Ahmed, had initially directed for the demolition of the 15-storey building for encroaching on the land meant for a service road on June 16.

Issuing a detailed order for the same on June 19, the court had also directed the builders of Nasla Tower to refund the amount to the registered buyers of residential and commercial units within three months.

The court had said in its judgement that “After examining the entire record and scrutinizing the reports submitted by all concerned agencies and departments, we are in no manner of doubt that the tower in question (Nasla Tower) has indeed been constructed on encroached land which amongst other things has also blocked a service road.”

“Being illegal construction and there being no provision for compounding such illegality specially where a service road has been blocked, the same is liable to be demolished,” it had added.

The builder of Nasla Tower had filed a review petition against the June 16 order, which was dismissed by the apex court last month.

Subsequently, the district administration served notices to the residents of Nasla Tower earlier this month, directing them to vacate the 15-storey building by October 27 or face coercive action by relevant authorities.

The Supreme Court summoned Sindh Chief Minister Syed Murad Ali Shah in a case pertaining to the demolition of leased properties built along Orangi and Gujjar drains in Karachi to inquire as to why its order was not implemented.

During the proceedings Monday, the court came down hard on the Sindh government over delays in the compensation to the people who lost their accommodations in forced evictions.

Chief Justice Gulzar Ahmed is currently in Karachi on a week-long trip and will be hearing important cases pertaining to illegal and unauthorised constructions, encroachments on amenity plots, conversion of residential and amenity land into commercial spaces in the provincial metropolis.

During the hearing, Justice Ahmed asked the Sindh attorney general for updates on compensation to be provided to over 6,000 affected people. The court asked what has been the progress so far and what were the ground realities.

The attorney general, however, could not satisfy the court. “Summon Sindh CM immediately, we will ask from him if they are trying to make fun of the court,” the chief justice said.

Earlier this year, the Supreme Court released a written order in the anti-encroachment case and ordered the authorities to compensate the people whose leased houses have been demolished in the drive along the drains.

At a hearing on September 23, the court chided the Sindh government over delays in the compensation for the affected people. “Shame on you [Sindh government],” Justice Ahmed had said.

The court instructed Shah to resettle the victims within a year and summoned a report on it, adding that resettling the affectees is the state’s responsibility and we have to find a way to do that.

Gujjar and Orangi drains are two of the three stormwater drains that are being widened to ensure a smooth flow of rainwater. Mehmoodabad is the other one.

After the court order, on October 5, Shah had announced in a provincial cabinet meeting that the victims of the campaigns will be paid Rs15,000 a month for two years.

It was agreed the evacuees will be given residential units in the Naya Pakistan Housing Scheme as well.

Sindh Local Government Minister Nasir Hussain Shah briefed in the meeting that 344 houses near the Gujjar drain and 60 houses and six factories near the Orangi drain have been demolished so far.

“We will take an Rs300,000 subsidy from the federal government and provide 30,000 residential units to the victims,” Shah revealed, adding the land for the houses will be provided by the Sindh government.

Police have registered a case against a group of people, including some lawyers, for assaulting a woman within the premises of a court in...
Read more
KARACHI

6 severely burned after fire breaks out around Korangi Industrial Area

Six people were severely burned after a fire broke out on Wednesday in the underground line of the National Oil Refinery (NOR) near the...
Read more
CITY