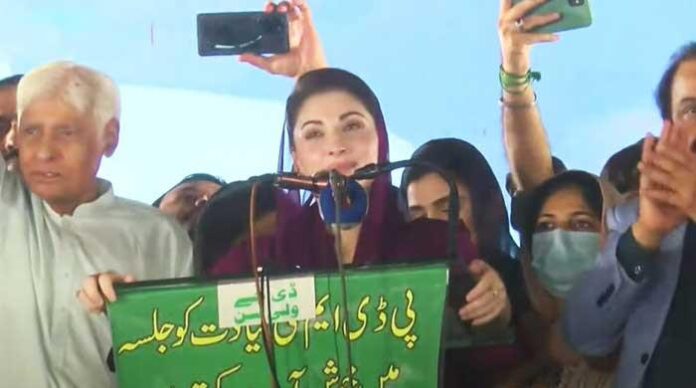 The PML-N Vice President Maryam Nawaz Saturday played on the anti-government emotions due to the extraordinary rise in petroleum prices, saying that Prime Minister Imran Khan’s PTI has been topped the list in Pandora Papers.

“The nation was told Imran Khan’s name isn’t included in the list .. have you ever heard that the leader of a pack of thieves was an honest person. It’s time now for the people of Pakistan to send Imran Khan home?” she remarked while addressing a rally of Pakistan Democratic Movement (PDM).

The rally, held at the Dhobi Ghat ground, was announced a while back by the Opposition alliance, with another to follow on October 31 in Dera Ismail Khan.

Maryam spoke of PML-N leader Nawaz Sharif, who is in London and has been declared an absconder by Pakistani courts, saying that Sharif has “left everything in the hands of God”.

“When a person leaves their matters to God […] no matter how powerful one is, or how they say they are on ‘one page’ [with others] historic defeat, historic humiliation, historic disgrace becomes the fate of the oppressive,” she said.

“So tell me now. Has God not made Nawaz Sharif’s opponents a warning to all?”

A grim-faced Maryam at one point asked the organisers to turn down the music.

She said that Nawaz Sharif’s opponents had suffered exemplary defeat as she hit out at the PTI-led government for the hike in prices of utilities and petroleum products.

Maryam said in Nawaz’s tenure [as PM], sugar was Rs50 per kg, and now after three years, it had crossed Rs120 per kg while electricity prices had shot up from Rs10-11 per unit to Rs25 per unit.

“There was a man named Imran Khan, who used to say when flour becomes expensive, when sugar prices rise, when rates of electricity and petrol rise, know that your prime minister is a thief,” Maryam said.

“So who is the thief now?” she asked a charged crowd. Maryam also criticised the government for the dengue outbreak, particularly in Punjab.

“The entire world is facing coronavirus, but now because of their [government’s] incompetence, people are dying of dengue,” she said.

“There is no one here like Shehbaz Sharif who used to visit hospitals,” Maryam added.

“The PDM will hold you [the government] accountable,” he said, adding that the Opposition has challenged “dictators and their followers” before.

The JUI-F chief questioned the PTI-led government over its move to drop a “petrol bomb” on the nation, asking what the fault of the common man was that they had to do such a thing.

“Today, the survival of states depends on the economy,” Fazl said, adding that an economic war has once again begun around the world.

The government has “destroyed” the economy of Pakistan, he said.

The PDM chief stated that the Parliament, which represents the people, has been rendered “unstable”. “What role will the parliament play when the people of Pakistan are forced to commit suicide?” he asked.

Shedding light on Pakistan’s foreign relations with other countries, he said that Pakistan has “infuriated China” while the US and Europe also did not help and Afghanistan cannot help.

“Iran is on India’s side, and our neighbouring country [India] is threatening our very existence,” he added.

“How long will you [Imran Khan] do politics by calling everybody else a thief?”

According to local PML-N sources, party supremo Nawaz Sharif also planned to address the gathering from London via video link.

The PML-N’s official spokesperson did not confirm the participation PML-N President Shehbaz Sharif. On her way to the gathering, Maryam shared videos on Twitter showing throngs of supporters welcoming her.

“Love of Nawaz Sharif,” she tweeted along with a video that showed party loyalists surrounding and entourage of vehicles.

‘Decisive rally’
Maryam also criticised the government over the hike in petrol prices while talking to the media in Lahore today before setting out for Faisalabad’s rally.

According to a notification issued by the Finance Division, the new price of petrol, effective from October 16 (today), was set at Rs137.79 per litre while high-speed diesel would sell for Rs134.48.

The PML-N vice president termed the price hike a “calamity” that had fallen on the people like a “lightning bolt”. “When petrol and diesel become expensive then your electricity, wheat, bread, vegetables and everything become expensive,” she added.

She said the PDM’s prior rallies had been successful at raising awareness with even children now cognizant of “what game was played with the country”.

Responding to a question, she said the PDM was perhaps not planning for a long march right now, adding that “this government is itself doing a long march against itself.”

Local leaders of the PML-N have mobilised workers by organising different corner meetings at various places in the district.

Faisalabad’s rally will be followed by a meeting of the PDM’s heads in Islamabad on Oct 18 to take up the alliance’s agenda.

The agenda of the meeting included a discussion on the current political situation with reference to price hikes and the proposed electoral reforms of the government, which included the use of electronic voting machines in the next elections. Besides this, the recently promulgated controversial ordinance granting extension to the tenure of National Accountability Bureau chairman retired Justice Javed Iqbal was also part of the meeting agenda.