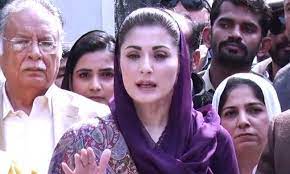 ISLAMABAD: Pakistan Muslim League-Nawaz (PM-N) Vice-President Maryam Nawaz has jeered at PM Imran Khan by stating that he “should not attempt to be Nawaz Sharif by now asking for the vote to be respected”.

In the wake of controversy over the appoinent of new DG ISI which started after the Prime Minister’s Office delayed the notification of Lt Gen Nadeem Anjum’s appointment, who was named as the new ISI chief by the Pakistan Army’s media wing in a press release last week, she went on state that “Wearing the skin of a lion does not make you [PM Imran] a lion. One has to endure jail and go to the Attock Fort to demand for the vote to be respected.”

“He [Premier Imran] has nothing to do with democracy and democratic struggle, but will have to answer for crushing people’s vote, and for burdening Pakistan with historical debts,” she added.

A controversy sparked when Information Minister Fawad Chaudhry in a presser, following the federal cabinet meeting on Tuesday, said that “The authority to appoint DG ISI rests with the prime minister.”

Maryam went on to add that there shouldn’t be two opinions about the constitutional rights given to a prime minister.

The PML-N vice-president said that she is not afraid of fake cases or arrests, adding that the National Accountability Bureau (NAB) can arrest her to show the world how afraid they are of the truth.

“Power can temporarily suppress the truth but it will eventually come to light,” she said.

She further said that “[PM] Imran Khan is neither a constitutional, nor legal, nor an elected prime minister,” she insisted and added that the premier relies on “magic” to run the country of 220 million people.

“When important appointments are made on the basis of witchcraft and ghosts, then obviously the institutions of the country will be turned into a spectacle,” she further said.

Maryam questioned why the premier’s “spells” could not be used for public welfare if they are so “successful”.

“Why can’t these ‘spells’ be used to lower the prices of wheat, petrol and medicine? Why are they only used for important appointments?” she questioned, claiming that the new appointment [of DG ISI] isn’t for the country, but to save oneself.

On NAB’s request for her and her husband’s bail’s cancellation, she sarcastically stated that “I want to meet the ‘close friend’ who filed the petition against my bail. This person should be given a 22-gun salute.”