PML-N’s Khurram Dastgir alleges firing on his house, a conspiracy against Opposition 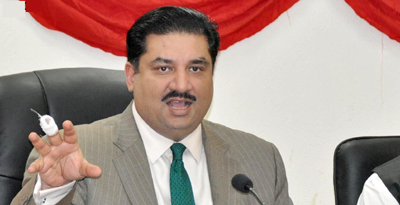 GUJRANWALA: On Sunday night, a few unidentified suspects opened fire on the side gate of senior PML-N leader Khurram Dastgir’s house, he revealed in a presser on Tuesday.

The PML-N leader alleged that the firing on his house was a conspiracy to “harass the Opposition”.

The PML-N lawmaker further revealed that when the incident took place, his family and children were present inside the house.

He went on to lament that no action was taken over the firing, despite the administration being informing about it.

He further revealed that despite numerous requests, case was not registered. However, he added that it was registered later, only after media reports about the firing incident surfaced.

He called the firing incident a “failure of [the] Punjab government to enforce law and order” in the province.

“You could not find the kidnappers of the presiding officers in the Daska by-polls. At least find those who opened fire on my house,” Dastgir stated.

He concluded by stating that this incident is another way to crush the Opposition.