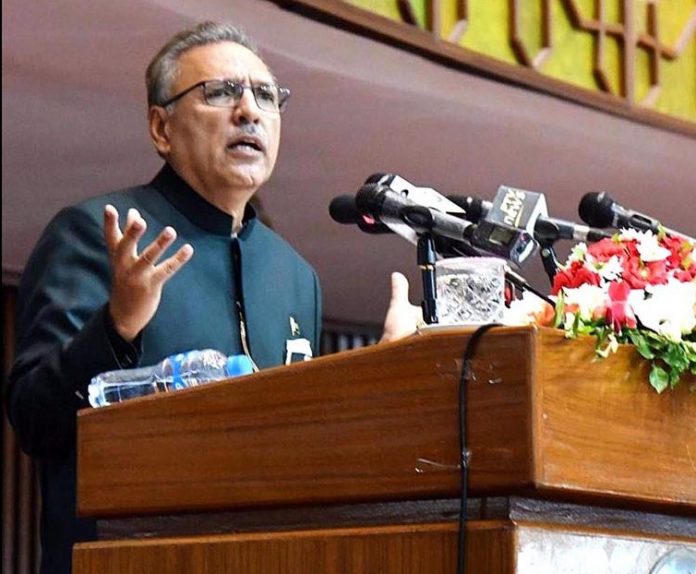 The following are the highlights of President Dr Arif Alvi’s address to joint sitting of the parliament:

Addressing the joint session of parliament, he mentioned increase in exports from $23.7 billion in fiscal year 2019-20 to $25.3 billion in 2020-21; workers’ remittances recorded at the historic $29.4 billion, vibrancy in stock market, improvement in ease of doing business and enhanced investors’ confidence as some of the government’s achievements.

The president said that with 18 percent growth in revenue collection recorded at Rs4,732 billion in 2020-21, the Federal Board of Revenue has registered an increase of Rs160 billion revenue collection as against the target during the first two months of the current fiscal.

Amid loud protest by the opposition benches, the president paused to say: “Despite you making noise, you will have to accept the reality.”

He said that with the record sale and purchase of 2.21 billion shares in one session in May 2021 alone, Pakistan’s stock market got the distinction of best market in Asia and 4th in the world.

The president further said that Pakistan, which had got 28 points of improvement in the World Bank’s ranking of ease of doing business two years back, has also won the confidence of overseas investors through 60 percent increase in the Business Confidence Index in the survey of Overseas Investors Chamber of Commerce and Industry.

The president said that the government had passed laws to protect rights of special persons and women as well as to eliminate sexual crimes.

He further stated that unfortunately, some cases of sexual crimes were reported from different parts of the country but the government made legislation to curb the evil which needed to be enforced.

The president added that, beside the government, it was also the societal responsibility to help stop the crime by being watchful against such elements.

He said the refusal of property rights to women still pervaded in some parts of the country which was unfortunate for a Muslim country as Allah Almighty had guided the followers in details on the subject. He again urged the society particularly Ulema to play role for awareness and counter the societal traditions.

President Alvi maintained that while considering the risks posed by global warming to Pakistan, PM Imran Khan launched Billion Tree Tsunami in KP and later countrywide 10 Billion Tree Tsunami as well as Clean and Green Pakistan Program to help steer the country out of the challenge.

Coming to the democratic system, the president said the electoral reforms were essential which could not be achieved through commotion.

He said the Electronic Voting Machine would ensure transparency, voters’ privacy and swift results as it also featured a counter to calculate votes. Moreover, the government is also taking measures like i-voting to grant voting rights to overseas Pakistanis.

Touching the subject of foreign policy, the president said India had been committing genocide of Kashmiri people as well as targeting Indian Muslim minorities.

He said Imran Khan, who had called himself as Ambassador of Kashmir, exposed the real face of India globally. He said Pakistan always strived to maintain friendly ties with the world which was also manifested by the prime minister in his maiden speech. But it was construed as Pakistan’s weakness by India, he added.

President Alvi asked India to end its atrocities in IOK and abide by the UN resolutions.

He also assured the Kashmir people that Pakistan was committed to its stance and thanked China, Turkey, Iran and Azerbaijan for supporting Pakistan’s stance on the issue.

He told the House that fascist ideology of RSS was a threat to regional peace and that India had also been involved in sponsoring terrorism in the region.

Moreover, he said the repeated incidents of uranium sale were deadly for regional security but unfortunately, the world media was keeping mum on it.

About Afghanistan, he said, since the beginning, Imran Khan called for political settlement in Afghanistan and opposed the military solution.

He said even after decades of war and spending trillions of dollars, peace could not be revived in Afghanistan.

Calling the Taliban’s announcement for amnesty were encouraging, he urged the world community not to leave the Afghan people in lurch rather make efforts to avert humanitarian and economic crisis.

President Alvi said Pakistan had been playing humanitarian role in Afghanistan with its flag carrier PIA being at forefront for evacuation.

He said the world should acknowledge that Pakistan’s stance on Afghanistan had proved correct and suggested the world to follow Imran Khan’s political acumen in other matters too.

The president said that different regional fora like Shanghai Cooperation Organization should be utilized for the promotion of regional linkages. China Pakistan Economic Corridor, he said, would further strengthen the linkages among the regional economies.

The president said peace in Afghanistan would be a good omen for all the neighboring countries.

He said Pakistan attached high priority to its ties with China that had played a vital part in the economic development and prosperity of Pakistan.

Expressing his confidence, the president further said that ill designs of certain elements in the region to harm these time-tested ties were doomed to fail. “I want to remind India that the friendship bonds between Pakistan and China will grow further,” he added.

The president said Pakistani nation had proved its mettle in trying times. “Never consider yourself as weak,” he said and enumerated five basic characteristics of the nation’s strength.

He said the nation on the basis of its intellect, developed nuclear deterrent within a period of seven years after India conducted nuclear tests during 1974.

Pakistan very generously hosted 3.5 million to 4 million Afghan refugees on its soil for decades. The countries which had been championing for the cause of human rights even did not accept refugees and let them drowned in the Mediterranean.

The president also paid rich tributes to the sacrifices of the armed forces, law enforcement agencies, civil forces and the nation who had jointly defeated the scourge of terrorism.

During the Covid 19 pandemic, the nation had contributed with huge donations and the prime minister took decisions on the basis of compassion that they would not impose complete lockdown and save the livelihood of the poor segments of society.

The government opted to enforce smart lockdown on the basis of data and rolled out Ehsaas programme, he added.

The president said by mingling of all these qualities with an honest leadership, the result would be ‘a shining, rising and smiling Naya Pakistan’.

The president also thanked media and Ulema for creating awareness about the pandemic, adding mosques were kept opened during the pandemic.

The president also highlighted the need to discourage the trend of fake news which had brought destruction in the world.

Referring to certain Quranic verses, the president urged the nation to seek guidance from these teachings and exercise caution over the fake news.

The president also emphasised upon the importance of family and school systems where training was imparted to the young generations.

He also called upon media to meet its responsibility in this regard and work for the training of society, adding mosque and pulpits were very important pillars of society.

The president appealed to the whole nation especially the political leadership, Ulema, media and young generation work collectively to face the social, economic and security challenges.

President Dr Arif Alvi congratulated government for removing the objections of Financial Action Task Force and for promulgating and implementing the necessary laws and procedures to this effect.

He said the government announced a construction package for citizens particularly for the vulnerable sections of society.

Naya Pakistan Housing Programme was announced for providing shelter to the homeless people, he said adding that the government announced a subsidy of Rs.36 billion for the construction sector and gave tax exemptions.

The banks gave loans for construction and as a result of this the housing and construction’s finance portfolio crossed Rs260 billion, he informed.

The agriculture sector grew by 2.77 percent while the exports of information technology sector grew to 2.12 billion increasing by 47 percent as compared to the last year.

The government took steps for the employment and skills of youth and started programmes of online trainings like Digiskills, he told adding it was appreciative that 1.7 million youth had got training under this programme.

The freelancers of Pakistan had earned Rs200 million.

The President said the world was going through fourth industrial revolution which was a revolution of thought and mind.

The present era is of artificial intelligence, cloud computing, software development, internet of things, networking and data analysis, he added.

Dr Arif Alvi underlined the need for focusing on cyber security. “I have confidence in the scientists and information technology experts, that with their mental capacities they would tackle the challenges of cyber defence and security issues.”

He said the government was giving priority to development of human resources.

“In the past all the attention was on the brick and mortar development and other areas
of human development were ignored.”

The President said the country in the past could not make progress due to the menace of corruption and wrong priorities.

The country was left behind in the human development indicators, he said adding the government started Ehsaas programme for poverty alleviation and social protection to take care of vulnerable and needy people.

He noted that the government distributed Rs. 208 billion under this programme and cash assistance was given to 12 million families or thirty percent of the population.

Under the Ehsaas Kafalat programme, seven million families were given Rs 2000 each.

The provide financial help to the youth for startups with easy loans, Rs.100 billion were allocated for Kamyab Naujwan programme under which so far 14,000 businesses were started, he said.

Similarly Rs10 billion were allocated for the Hunarmand programme, he explained.

The President said the government launched health card for universal health coverage in Pakistan and now 81 million persons could benefit from this programme.

Programmes were initiated for tackling the issues of stunted growth and food deficiency in children.

About 50,000 students were given Ehsaas scholarships. Higher Education Commission waived off tuition fees and hostel fees of special persons studying in universities, he added.