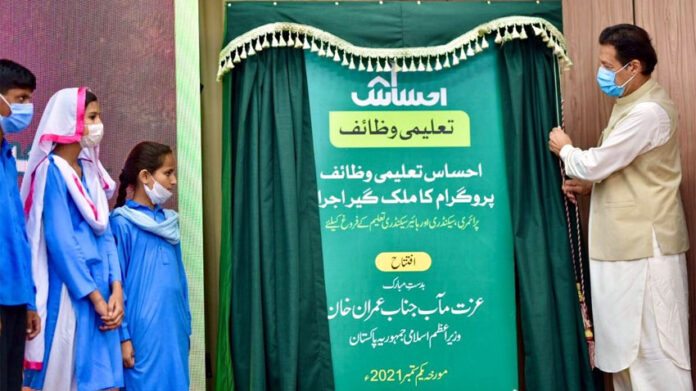 Addressing the launch of the programme, the prime minister said as over 20 million children were out of school, efforts were underway to ensure their inclusion in the educational mainstream.

The stipend programme was aimed at providing financial assistance to deserving households for the education up to higher secondary levels of their children.

Rolled out nationwide in 160 districts, the programme had been structured to give an increased stipend to girls as compared to boys.

Imran said ensuring education for all was a priority of the government, adding that stipends as incentives would be a step to encourage parents for sending their children, particularly girls, to schools.

He said an educated woman could contribute more positively towards society and lauded the policy of the programme to give a higher amount to the families of female students.

Terming educated human resource a great asset of a nation, he said it was important to provide educational opportunities to both boys and girls.

He dismissed the impression in the western world that the people of Pakistan did not want to educate their girls.

He recalled that during his visits to different parts of the country, he found no such parents who denied the right to education to their daughters. However, he said, the factors including distant schools or unavailability of female teachers could be a reason.

Imran said it was mainly the responsibility of the government to ensure the provision of quality education to all.

He appreciated that by the use of information technology, the stipends would be disbursed transparently after proper checking of fake entries and ghost schools.

This award would be given to girl students from registered Ehsaas families completing grade 5. The bonus had been designed to encourage girls’ education until secondary level.

She said the stipends would be paid biometrically to the mothers after the attainment of 70 percent attendance of their children.

She said as part of a post-pandemic Ehsaas strategy, the stipends would empower the deserving families to overcome financial barriers in accessing quality education.

Poverty was one of the most persistent barriers to acquiring education. Nationwide, at present, there are 18.7 million children between the ages of 6-16 out of school and the fall out of the Covid-19 crisis has also accentuated it.

The ECCT served the dual purpose of socially assisting vulnerable households and at the same time reducing the number of out of school children.

The government had been running an ECCT programme, Waseela-i-Taleem, for primary school-going children since 2012 in selected districts. The programme encountered a number of challenges, including inflated administrative costs charged by non-government organisations were administering the initiative, errors and instances of fraud due to the programme not being digitised, weak compliance monitoring, limited human resources to enrol students and low stipend.

Also, it was limited to grade 5 and did not include secondary education whereas the Education Stipends programme could be of high impact.

Multiple studies revealed that school drop-out rates increased with age especially for girls in classes 5 to 8, mainly due to distance from the school and costs associated with it.

The previous CCT programme was limited in geographic scope and lacked appropriate federal-provincial partnerships. Also, payments to beneficiaries were being made through the Benazir Income Support Programme which was plagued by rampant corruption.

In switching to the stipend programme, the operational cost has been reduced from 3 to 8 percent. The end-to-end digitisation of the process has eliminated the opportunities for misuse of authority.

Compliance monitors have been hired and a project monitoring unit had been established to assist them.

Also, through a memorandum of understanding with the National Commission on Human Development, additional 1,000-strong staff has been engaged to enroll students.

The stipend has been doubled for children in primary classes and further increased for girls.