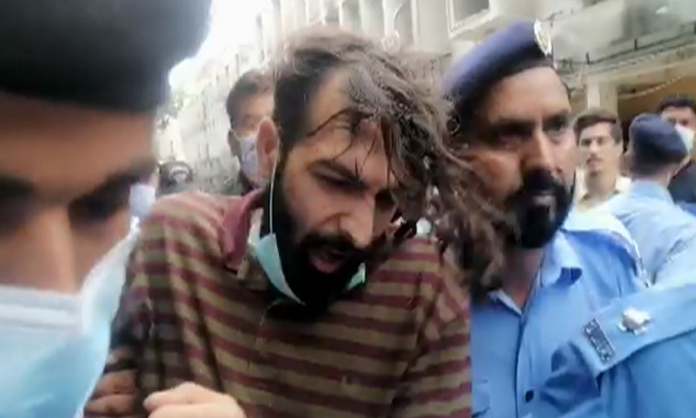 Therapy Works Chief Executive Officer Tahir Zahoor has submitted an application with a sessions court in the federal capital against the primary suspect in the Noor Mukadam case, Zahir Zakir Jaffer, for allegedly attacking and injuring a member of his team.

The counselling and psychotherapy service came under public scrutiny as the murder investigation unfolded and it was revealed that the primary suspect, Jaffer, was associated with it. Whether he was authorised to work as a therapist by the service has yet to be ascertained by investigators, reported Dawn.

The capital administration had also sealed the office of Therapy Works in Islamabad.

In the latest development, the CEO of Therapy Works submitted an application through his lawyer, Shehzad Qureshi, asking the court to order the registration of a criminal case against Jaffer.

Zahoor explained in the petition that his medical team had visited Jaffer’s home on July 20, 2021, upon his father’s request who wanted his son to be admitted at the Therapy Works facility for rehabilitation.

He continued that as the team entered Jaffer’s room through the back door after not being able to get in from the front, “he attacked a team member with a knife, but other medical team members apprehended him.”

The petitioner said the medical team also spotted a young girl lying on the floor beheaded whom Jaffer had murdered.

In the petition, Zahoor said Kohsar Police didn’t listen to their version since the day the incident unfolded. He recalled that Jaffer had stabbed one of the Therapy Works employees, adding that an application was also submitted with the Kohsar Police Station but no action was taken against Jaffer.

On Wednesday, the sessions court sought a response from the police and adjourned the case hearing till Sep 7.

On Aug 23, the sessions court had granted bail to six officials of Therapy Works, including its owner and chief executive officer, in connection with the case.

It is pertinent to mention that last week, a petition had been moved to Islamabad High Court challenging the decision of lower court granting post-arrest bail to six employees of Therapy Works including its Chief Executive Officer Tahir Zahoor in Noor Mukadam murder case.

The petitioner Shaukat Mukadam had prayed before the court to set aside the decision of district court Islamabad regarding the bail of the accused.

It was stated that the lower court had not completed the requirement of justice in its decision and ignored various legal points. The court also ignored the directives of the top court in such matter.

The petitioner said the accused were also threatening family of the victim. It could cause an irreparable loss to the victim family if the accused bails were not cancelled, he said.

He prayed before the court to turn down the decision of additional district and session judge and cancel the bails of all six accused.

Earlier last week, Therapry Works owner and Chief Executive Officer Tahir Zahoor, along with five employees, were granted bail by a sessions court on Monday in their connection to the Noor Mukadam murder case.

During the hearing on the bail petitions today, Zahoor’s lawyer, Barrister Qasim Nawaz, argued that the Therapy Works owner was arrested despite his name not being mentioned in the first information report of the case, according to a report by Dawn.

He said therapy-related work was his client’s profession and that he treated people.

On the other hand, Shah Khawar, the counsel for Noor’s family, argued that Therapy Works employees had broken the doors to enter the house of the primary suspect Zahir.

“Zahir Jaffer killed Noor and then informed his parents,” the counsel said. “They called the Therapy Works centre to go [to their home] and check on their son.”

However, Barrister Nawaz contended that the “allegations” levelled against his client were false, adding that the sections included in the FIR against Therapy Works employees were “bailable offences”.

Shahzad Qureshi, the counsel for the other five Therapy Works officials, said that his clients had always appeared before the police when called.

“[Therapy Works owner] Tahir Zahoor is a heart patient, his kidneys are affected and he has high blood pressure issues,” Barrister Nawaz further argued as he submitted his client’s medical history to the court.

He said the personnel sent by Therapy Works had “arrested” Zahir and did so despite being injured by the primary suspect.

Amjad’s medical history was also submitted to the court.

Qureshi informed the court that Amjad had been injured when Zahir attacked him with a knife. “The five people went to the scene [of the murder]. How did Amjad get injured if they were hiding the evidence?”

“Zahir attacked Amjad and critically injured him. [They themselves] called the police. They were turned into suspects 18 days after the incident,” he further stated.

For his part, the counsel for Noor’s family opposed the bail plea, arguing that the investigation was ongoing, call records were being collected and CCTV footage was “important evidence”.

As people’s roles are discovered, they are being nominated as suspects, he added.

The plaintiff’s counsel argued that Zahir’s father had called Zahoor instead of the police and told him to “go and check.”

The police station is 10 minutes away from where the murder took place, he informed the court, adding that Amjad had surgery and was discharged from hospital but the matter was still “not handed over to the police”.

Amjad had “not wrongly” been turned into a suspect, he argued.

Separately, a duty judicial magistrate in Islamabad on Monday extended the judicial remand of Zahir Jaffer’s parents till September 6 in the Noor Mukadam murder case.

The two accused including Zakir Jaffer and his wife Asmat Adamjee was produced before judicial magistrate Maqsood Ahmed Anjum by the police. The court marked the attendances of the accused and sent them again to jail on judicial remand.

Moreover, Duty Additional Sessions Judge Ata Rabbani in District and Sessions Court heard the case of bail application of six accused including the owner of the therapy centre.

Shah Khawar, an advocate of the accused owner of a therapy centre Tahir Zahoor defended his client in court and argued that his client was arrested despite his name was not nominated in the FIR.