Afghanistan’s neighbours and the Taliban

Neighbours reached out to the Taliban before they took over 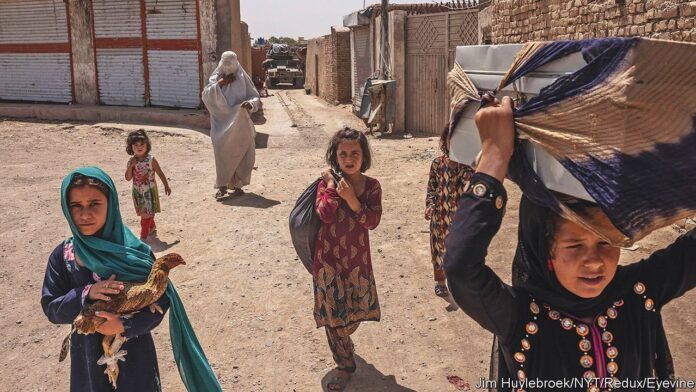 Afghanistan is a landlocked and resource-less country that has always been victim of external influences and which faces challenges to its sovereignty and traditions. Sometime ago, it enjoyed the beneficence of others due to competition among regional and international powers. Moreover, it has suffered and served as a classic buffer state between the Czarist and British empires. During the Cold War it became a battlefield between the USSR and the USA. Almost a third of the population of Afghanistan went to exile and millions were killed in the war. After the disintegration of he USSR, Afghanistan was also near to disintegration due to a civil war that was sponsored by regional and international powers. During the 1990s, Afghanistan hosted a war between radical Islamist and Western thoughts and their followers.

Post 9/11, Afghanistan once again was under the bombardment of The USA and NATO. At that moment, the Taliban moved to the countryside and challenged the foreign forces. The strategic approaches of Afghanistan’s neighbours have always remained subject to readjustment and revision. No regional power wants that the others to gain preponderance or influence in Afghanistan. In addition, each state always has been collecting potential links to secure itself from the fractionalizing and incapacitating situation of Afghanistan.

As the USA announced it was withdrawing from Afghanistan the neighboring countries started to become ready for contending with its consequences. The uncertainty has increased at all the borders of Afghanistan and its neighbouring states has started to contain tTaliban and to boost defensive and preventive measures to contain the uncertain and uneven situation of Afghanistan. Talban are overplaying and have controlled Afghanistan.  Since June, seven border crossing points out of 14 were under the control of the Taliban particularly along the borders of Iran and Pakistan.  Many people and Afghan soldiers have fled to neighbouring Tajikistan, Pakistan and Uzbekistan.

A few weeks ago, President Ashraf Ghani stated in Uzbekistan that Afghanistan was literally being disconnected from the region. As the Taliban were controlling border crossing points, there was no other choice for neighbours but to engage the Taliban as a de facto authority. Therefore, the regional policy for Afghanistan may be driven by narrower, more fundamental interest, ensuring border security, protection of kin or affinity groups, minimizing the inflow of refugees and free flow of goods. The Taliban’s initial control over many crossing points of the border may reflect their strategic insight. Although the Doha Accord stopped the Taliban from attacking provincial capitals, the Accord did not forbid the Taliban from controlling border crossing points as well as the whole of Afghanistan.

Capturing the border crossings provided an alternative way to the Taliban to assert themselves as a state and to expand political and diplomatic leverage over the Afghan government and neighbouring states, at the same time following the agreement with heb Washington. The Taliban’s activities all over the country created the perception that the Taliban’s takeover was inevitable. This affected the Afghan armed forces, and people opted to stand with the Taliban.

Regional states were not comfortable with the growing domination of the Taliban in Afghanistan. Therefore, the neighbouring countries had no alternative but to engage the de facto power, the Taliban. Although they supported the Afghan government, they were increasing their outreach to the Taliban.

Then the donors and multinational companies and groups will not support the Afghanistan of the Taliban. This situation may lead the country into isolation and freedom from foreign aid. Then Afghanistan may be a net loser.

Many Afghan Shi’a Muslim fighters were part of Islamic revolutionary guards, and they continued travel to Afghanistan. They could have resisted the Taliban’s advancement in predominant areas of Afghanistan. Iran had been supporting the Taliban against US and NATO forces, but now it sees the Taliban as a more dangerous radical force than ISIS. After the departure of the USA from Afghanistan, Tehran can begin to veer against the Taliban. Tehran may also support the Taliban to get respectable treatment of the Afghan Shia minority.

Tajikistan has a soft corner for the Taliban because it does not see them as forming an extremist or terrorist group. Tajikistan has also announced that it has prepared to host almost one lac refugees.

On the other hand, Tajikistan has organized military exercises to counter terrorist activities and deployed reservists on the Afghan-Tajik border. In August 2021, it will host Russia and Uzbekistan to participate in military exercises to encounter terrorist acts. Moscow has also agreed to help Tajikistan for the construction of a defensive outpost on the Afghanistan-Tajikistan border. Russia has also been eager to see a US withdrawal from Afghanistan.

The uncertainty and instability of Afghanistan are creating both opportunities and threats for Uzbekistan. The president Shavkat Mirziyoyev Mirziyoyev has struggled to open his country to the region and to build relations with the USA. To achieve both objectives, Uzbekistan has hosted intra-Afghan talks. Uzbekistan is also offering itself as an anchor for regional economic activities and Central-South Asia connectivity. All these are possible only if meaningful peace and stability is established in Afghanistan.

A delegation of Taliban has visited Turkmenistan two times since 2020 and had a dialogue with government officials. During the first visit to Turkmenistan, the Taliban has affirmed their support for regional connectivity projects, particularly the Turkmenistan-Afghanistan-Pakistan-India gas pipeline. Regional states may be influenced by their ethnic kinsmen. Northern part of Afghanistan is a composition of multiethnic groups and they can mitigate concern about non-Pashtun minority groups of Afghanistan.

Pakistan has always been struggling for peace in Afghanistan. A few weeks ago, Pakistan had organized intra-Afghan talks but Kabul scuttled these efforts. The terrorist attack on Chinese workers renewed the sense of urgency with which China and Pakistan saw the need for negotiations to establish peace and harmony in Afghanistan. In the wake of this attack, China-Pakistan asked for a comprehensive ceasefire and joint action to prevent Afghanistan from sliding towards full-scale civil war.

Soon after this, a delegation of Taliban visited Beijing and discussed the changing security situation in Afghanistan. Actually, China was worried about the security vacuum which would be created after the US withdrawal from Afghanistan. China, Pakistan and Iran also wanted a US withdrawal from Afghanistan, but after peace and a political settlement. Since the late 2000s, Pakistan’s relations with the Taliban had not been good because of the emergence of anti-state Pakistani Taliban and the growing independence of the Afghan Taliban. Now the tables have turned and the COAS of Pakistan has stated that Pakistani and Afghan Taliban are two sides of the same coin.

Now that the Taliban have taken over the whole country it may lead the Taliban to create their own circumstances and they can then enforce their own terms and conditions in Afghanistan.  The country may also end up resembling more of an emirate than a democracy.

Then the donors and multinational companies and groups will not support the Afghanistan of the Taliban. This situation may lead the country into isolation and freedom from foreign aid. Then Afghanistan may be a net loser.