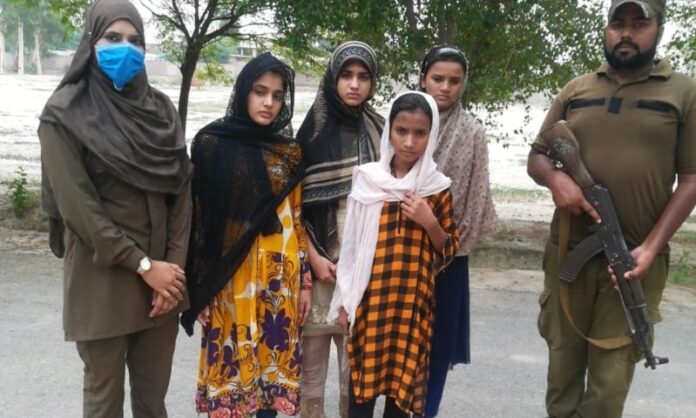 A district court in Lahore on Thursday remanded five suspects to police custody and two women to judicial custody in the case of kidnapping of four girls from the city’s Hanjarwal area on July 30.

Earlier, the Hanjarwal police produced the suspects in the court of Judicial Magistrate Noman Nasir, where the girls were also presented.

The police requested the court to grant 14-day physical remand for the suspects’ interrogation. However, the court remanded the five men for four days to police custody and sent the two women to jail on judicial remand for 14 days.

The judge also ordered medical examinations of the four girls and fixed the next hearing for Friday.

Deputy Inspector General Shariq Jamal said that the four missing girls, who were found from Sahiwal on Wednesday, have been brought back to Lahore.

“The young women were presented in court today. They have been sent to the Punjab Child Protection Bureau after they refused to go back home,” he said in a media briefing.

The court will decide whether the young women will be handed back to their parents or moved to a shelter home on Friday. According to the law, we can’t force them to go back home if they don’t want to, the DIG said.

According to the FIR, earlier this week, four girls, between the ages 8, 10, 11, and 14, left their houses for a Metro train ride and did not return.

The police said on Wednesday that one of the girls was carrying a mobile phone with her. They traced the cellphone to a location in Sahiwal and alerted the police there. When they reached the location, the girls were found with a man, identified as Qasim. He called himself their relative and was a rickshaw driver by profession.

“We traced their location using CCTV cameras and visited the crime scene,” DIG Jamal revealed. “All the suspects involved in the case have been arrested and are being questioned.”

The DIG claimed that the girls were taken to Sahiwal for human trafficking. “The suspect sold one of them for Rs100,000.”

The police are going through Qasim’s criminal record. “We found out that his wife recently travelled to Dubai multiple times. The police are trying to ascertain the purpose of those visits,” the policeman added.