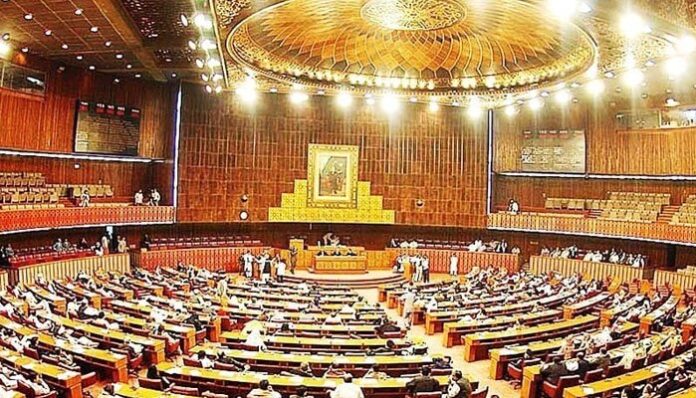 ISLAMABAD: The National Assembly was informed on Monday that Pakistan will soon come out of the Financial Action Task Force (FATF) grey list as it has largely addressed 26 out of 27 action items.

Responding to a question during the Question Hour in the National Assembly, which resumed its session at the Parliament House with Speaker Asad Qaiser in the chair, Minister of State for Parliamentary Affairs Ali Muhammad Khan said that Pakistan has undertaken enormous work to strengthen its anti-money laundering and combating the financing of terrorism regime and addressed the strategic counter-terrorist financing related deficiencies.

He said all the ten action items pertaining to the financial sector and border controls have been addressed. The minister said that action items related to UN designated persons have been partially addressed and Pakistan is dealing with this matter as per its own laws.

Replying to another question, the minister of state said the foreign exchange reserves rose from $16 billion to $25 billion in the last three years.

Responding to a question, Minister for National Food Security and Research Syed Fakhar Imam rejected the reports that the government is going to impose a ban on export of rice. He said the government imported wheat to build strategic reserves to avert any shortage.

ISLAMABAD: Two soldiers and a terrorist were killed during an exchange of fire between security forces and terrorists in Khyber Pakhtunkhwa, an army statement...
Read more
NATIONAL

The Biden administration has told lawmakers the United States is nearing a formalised agreement with Pakistan for use of its airspace to conduct military...
Read more
NATIONAL

Three policemen were martyred and several others injured in clashes with workers of the banned Tehreek-i-Labbaik Pakistan (TLP) in Lahore on Friday, according to...
Read more
- Advertisment -

October 23, 2021
ISLAMABAD: Two soldiers and a terrorist were killed during an exchange of fire between security forces and terrorists in Khyber Pakhtunkhwa, an army statement...