How to stop harassment at the workplace 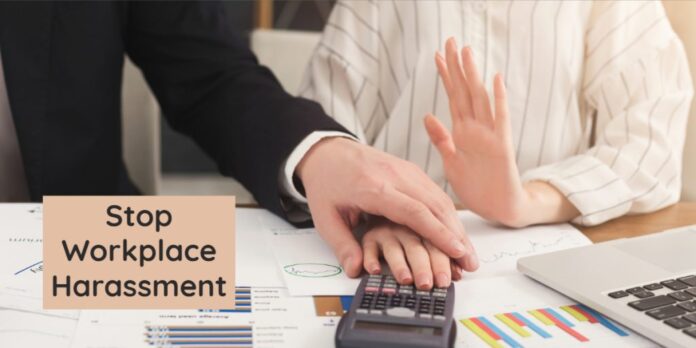 Unacceptable behaviour, or inappropriate behaviour that can make any person uncomfortable, afraid or embarrassed, is known as harassment. It includes spoken harassment, sexual abuse, verbal harassment, sending inappropriate pictures to someone through email, and messaging is equally a form of harassment. We typically hear every day in the local news and social media that a woman was a victim of harassment at the workplace or outside. Legitimate cases are reported in large numbers, which we cannot imagine. Many females don’t even report harassment cases because of social fear of the family and because they naturally think they will be kicked out of the job if she makes a complaint against the harasser. No complaints “undoubtedly makes the alleged culprits stronger.”

Sexual harassment does not only happen at the workplace but even in academic institutions and it is of two types, physical sexual abuse and online sexual harassment. The #Metoo campaign brought the actual sexual harassment cases into the public and, it displayed the ray of hope to those women who were the victims of harassment. According to a report of Pakistan’s national commissioner of children and women, around 93 percent of Pakistani women had experienced sexual violence and harassment in public or workplaces in their life.

What does the law say? Every developed country has a law against harassment and sexual abuse. The anti-harassment law protects the person from harassment based on gender, race, national origin, age, or disability.  The Protection Against Harassment of Women At The Workplace Act 2010 protects women’s rights and provides women the power to oppose harassment and the harasser. Section 509 of the Pakistan Penal Code clearly defines harassment, including harassment at the workplace. Under this rule, an offender gets punished by one to three years imprisonment or a fine of up to Rs 500,000 or both.

The penalties consist of two types if an offender is found guilty of harassment against women at the workplace. There are easy penalties: withholding promotion or increments, temporary suspension; paying compensation and damages if the accuser sues successfully. Benefit of doubt can save the offender for some time.

Then there are hard penalties like forcible retirement or removal from the job, fine, recall of such company-provided benefits as car and home, no further employment in other companies, and FIR being lodged against the accused.

Section 509 of the Pakistan Penal Code 1860: This section of the law is powerful, and its provisions testify that If a man insults a woman, utter any bad word, or makes a dirty gesture in a public place, transport, street, private gathering, workplace, and at residence, then an offender will be punished with imprisonment of three years or fine and, in a dangerous situation, an offender may get both under this section. This section also protects the women against sexual favours demanded by the person.

Section 510 of the Pakistan Penal Code 1860: If a drunken person’s presence annoys a female and harasses her, then that person will be imprisoned or fined under this section.

Section 366A of Pakistan Penal Code 1860: This section stopped the sexual procuration of minor girls. If a person by any means induces any minor girl to perform sexual intercourse, forced or seduced, then this is a punishable act with imprisonment of up to ten years and a fine.

These laws will typically make it harder for offenders to defend themselves at any active stage. Appropriate charges and lawsuits usually depend on the complex nature of the considered harassment. An identified victim can also file a lawsuit against a harasser in court. The victimised female can file a complaint directly through the citizen portal or to the Ombudsman or the Inquiry Committee, under section 8 of the Protection against Harassment of Women at Workplace Act, 2010.

What impacts does harassment bring? The victim knows much better than anyone else. The affected person can be sleepless for many nights, can not concentrate on work, and feels tense and depressed.

Harassment impacts the mental health of the victim. It causes psychological effects, depression, anxiety, and fear. If the victim is assaulted sexually at a young age, the assault will be remembered by the person for a very long time until the victim is “consulted.” It may lead to fear of losing family and friends, reduction in salary and termination from the workplace.

How to prevent sexual harassment? Despite being harassed, females in Pakistan usually don’t file a complaint because they are scared of being rejected. Some women who want to file a complaint also get harassed by the person who filed the complaint, and then they quietly endure it. Not filing a complaint means to make “an offender powerful.” Sexual harassment is illegal and, to prevent sexual harassment, the vulnerable victim needs to understand it can only stop if the victim can name and shame the harasser in public. There are a few other things to keep in mind, that some practices can be effective when you’re a victim of harassment at the workplace, educational institutions, home, and even at any other place.

If you have faced harassment in any form, report it first. Consult your family and friends about harassment. Tell the harasser that you will name and shame him in public.

Never destroy sufficient evidence in any form; if the harasser has sent you a message on social media or has called you or conveyed you a letter, then save it for the legal battle.

Are you harassed at the workplace? The first thing is to immediately contact the company executives, managers, or other staff. If someone is blackmailing you, record the event and then send it to local authorities.

⦁ If you have received unwanted messages, calls, and requests from the same person on social media, then contact the FIA “Cyber Crime Wing.” Avoid meeting alone with any staff, workers of the workplace, and even strangers. Never accept job offers from non-notable and newly started small companies or employers because they usually advertise like this, “We need female executived, female sales managers for our company.”

DJ Kamal Mustafa
The writer is a freelance columnist