Probe into abduction of Afghan envoy’s daughter will be transparent: FM 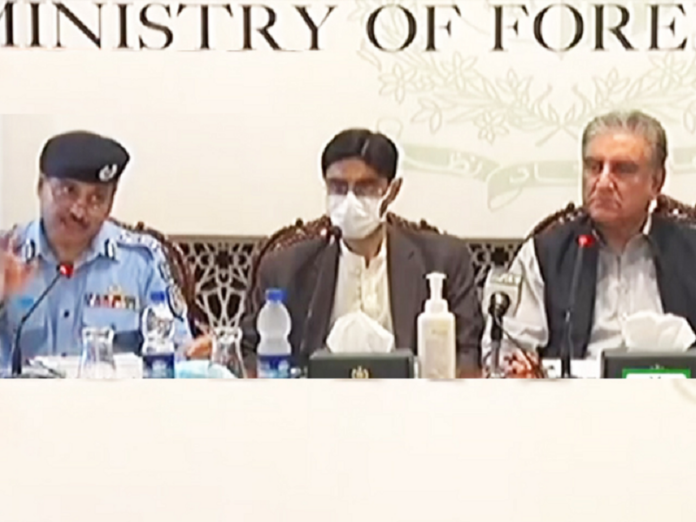 Foreign Minister Shah Mahmood Qureshi has assured the government of Afghanistan that the probe into the Afghan ambassador’s daughter’s incident will be transparent and nothing will be concealed.

His comments come after the Afghan Taliban have stressed upon Pakistan the need to “arrest and punish the perpetrators” involved in the reported abduction so that “spoilers don’t have ground to misuse” the incident.

Suhail Shaheen, the official political office spokesman for international media, also condemned the incident in a tweet, it emerged earlier.

He added that Islamabad needs to “step up efforts” to arrest and punish those responsible so that such acts do not “give rise to hate between the two nations”.

Speaking during a press conference on Monday in Islamabad while accompanied by National Security Adviser Moeed Yusuf, FM Qureshi said that he spoke to his Afghan counterpart this morning and discussed the steps that the Government of Pakistan has so far taken to investigate the matter.

“We have assured the Afghan government that Prime Minister Imran Khan is personally overseeing the probe into the alleged abduction of the Afghan ambassador’s daughter,” he said.

Speaking at the same presser, National Security Adviser Dr Moeed Yusuf said that Pakistan was currently a target of “hybrid warfare” and an entire network of information warfare was being used against the country.

Yusuf recalled that the EU-based DisinfoLab had exposed an India-based network of fake websites and media outlets doing propaganda against Pakistan.

He said fake accounts and bots were being used to create a “narrative” against Pakistan, including regarding the incident involving the Afghan envoy’s daughter.

Sharing slides on data gathered by the government, Yusuf said hashtags were being trended on a daily basis to create false impressions including that Pakistan “is doing something [wrong] in Afghanistan” and that the security situation in Pakistan was poor.

“This is part of an orchestrated campaign of which various fronts have been opened against Pakistan,” he said, adding that the same accounts that did “fake propaganda” regarding Balochistan or Kashmir were also doing propaganda ever since the alleged abduction incident took place. According to Yusuf, some of these accounts were operated from inside Pakistan, while the rest were controlled from Afghanistan, India and the West.

As an example, the NSA showed a tweet by a verified Indian Twitter account that contained a false picture of the Afghan envoy’s daughter showing her in an injured state.

He said the “spoilers” were trying to create rifts between Pakistan and Afghanistan, adding that this narrative reflected that Pakistan was being made a “scapegoat” in Afghanistan.

“Blaming us for the failures of someone else in Afghanistan will not be acceptable to us,” he stressed. He said the government monitored the coordinated activity being carried out through bots and reported the same, but new accounts kept emerging.

Senior police officials were also part of the press briefing and said that they have found no evidence that the daughter of Afghanistan’s ambassador was kidnapped from the capital city.

The IGP said that the authorities have formed five teams to probe the matter. “We used all our resources for the investigation… and supported all law enforcement agencies,” said the IGP.

He said the purported abduction of the Afghan envoy’s daughter is a complete “blind case” and as per police investigation, her abduction has not been proven yet.

Providing details of the ongoing probe, the IGP said that more than 700 hours of video surveyed by 300 cameras were reviewed by the investigation teams, while more than 220 people were interrogated.

“We traced the entire route on which the daughter of the Afghan ambassador travelled and also traced both the taxi drivers who drove her,” he said. “Before going to the city’s F-9 Park, the ambassador’s daughter first went to the F-6 area.”

He said that the driver has confirmed he drove the ambassador’s daughter from Khadda Market to Rawalpindi Saddar. CCTV camera footage shows that she hired another taxi from Saddar to go to Daman-e-Koh.

“We have traced the taxi driver as well as the owner of the taxi and they have confirmed that they dropped her off at Daman-e-Koh. From there, she went to the F-9 Park,” the IGP said.

A day earlier, the Afghan Government on Sunday recalled the Afghan Ambassador and other staff of the Afghan mission back to Kabul after the abduction of the envoy’s daughter.

According to unconfirmed reports, Pakistani envoy to Kabul Mansoor Ali Khan also arrived in the Pakistani capital the same day – hinting at another diplomatic stalemate as the Afghan regime fights for its survival as media reports say Afghan Taliban who already controls over 85 percent of Afghan territory are making their final push to take over Kabul.

Silsila Alikhil, 26, was going home in a rented vehicle in Islamabad on Friday when she was briefly kidnapped by unidentified assailants who released her hours later with injuries and rope marks, Afghanistan’s foreign ministry claimed on Saturday.

Investigators, however, have found ‘holes’ in the story of the victim girl, saying that the girl had visited several places in twin cities and footage of her visits had been retrieved and was being looked into.

“(Afghanistan) President Ghani has recalled the Afghan envoy and other diplomats from Islamabad, saying the kidnappers of the ambassador’s daughter must be brought to justice and the safety of Afghan diplomats in Pakistan be secured,” said Tolo News quoting Waheed Omar, an adviser to Afghan President.

Pakistan immediately responded to the Afghan President’s move, terming it ‘unfortunate and regrettable’.

“The decision by the Government of Afghanistan to recall its ambassador and senior diplomats from Pakistan is unfortunate and regrettable. ​The reported abduction and assault of the ambassador’s daughter in Islamabad is being investigated and followed up at the highest level on the instructions of the Prime Minister. The security of the Ambassador, his family and personnel of the Embassy and Consulates of Afghanistan in Pakistan has been further beefed up,” said an official statement issued by the Ministry of Foreign Affairs.

The move looks a part of an apparent bid to build pressure over Pakistan despite the fact that Pakistan had taken immediate and swift actions to apprehend the culprits involved in harassment to the daughter of the Afghan envoy.

Interior Minister Sheikh Rasheed on Sunday told a media briefing that the abduction case of the Afghan ambassador’s daughter would be solved within 72 hours.

He said the interviews of the trio of taxi drivers whose cars the ambassador’s daughter had ridden have been recorded. He said the first driver had driven the envoy’s daughter to Khadda Market in sector G-7/1, while a second driver had then driven her to Rawalpindi. He added that a third had driven her from Daman-e-Koh, Islamabad.

The interior minister said that footage of her trip from Rawalpindi to Daman-e-Koh was missing and the matter was under investigation. He said the “riddle” would be solved by the evening and all aspects of the case would be unearthed, reflecting some ‘holes’ in the statement of the victim.

A medical examination report, shared on social media and later confirmed by the Pakistan Institute of Medical Sciences where Alikhil was treated, said she was admitted with swelling and rope marks on the wrists and ankles.

The report said that she was held for more than five hours and also noted she had some swelling in the brain’s rear occipital region.

There were three drivers under investigation, wherein the first had taken the victim to Khadda Market, a second had then driven her to Rawalpindi, and a third had driven her from Daman-e-Koh.

However, the statement of the girl did not mention her visit to Khadda Market, Rawalpindi and Daman-e-Koh. Rather, the victim in her statement.

Social media activists took to the social media site, Twitter, to register their protest over the Afghan government’s decision to recall its diplomatic staff from Islamabad.

“Why should not #Afghan Embassy be handed over 2 Taliban who controls 80 percent of Afghanistan. Kabul regime has no longer functional internal sovereignty. Send Afghan Ambassador back. Recognise de-facto Taliban govt as de-jure Afghan govt,” tweeted Jan Achakzai, a noted columnist and political commentator.

with additional input from Mian Abrar