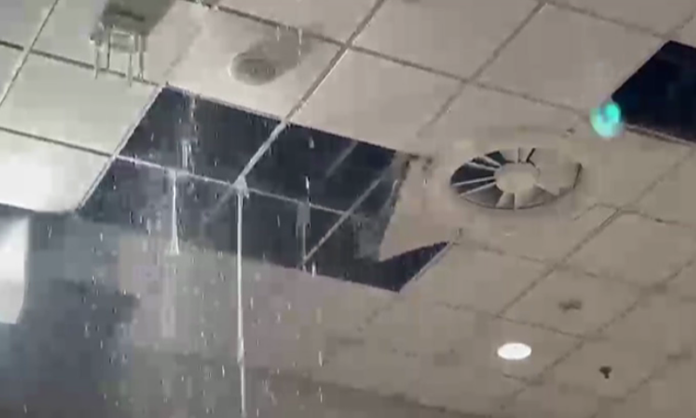 The false ceiling of the Islamabad International Airport partially collapsed after the recent most round of downpours in the twin cities of Islamabad and Rawalpindi on Monday caused rainwater to enter the airport structure.

The rainwater poured down from the ceilings above several counters, including immigration, and caused computers and other equipment to malfunction, reported Dawn.

Civil Aviation Authority staff stood by helplessly as parts of the ceiling came crashing down due to the weight of water.

However, officials said that airport operations were not suspended and work continued as usual. They added that repair work was underway and would be completed soon

This is not the first time that the gleaming Islamabad airport has been damaged by rain. The boundary wall being used for blocking access of animals to the runway of New Islamabad International Airport collapsed after the heavy rainfall in September 2020.

The 45 feet long wall collapsed near the airport’s runway which also caused damages to the watchtower. According to the airport manager, the administration will start repair work of the collapsed wall on an emergency basis.

On the day of the incident, Aviation Minister Ghulam Sarwar Khan said that more rainfall is expected in the next two days in the upper parts of the country as per the prediction of the Met Office. He said that there is no forecast of further rain in Karachi. Ghulam Sarwar Khan also expressed sympathy with the affectees of the recent rainfall across the country.

The airport, which was built at a cost of Rs105 billion, became operational in May 2018. It has two runways — each 12,000 feet long and 150 feet wide, taxiways and aprons for wide-body aircraft.

The construction work on the airport started in April 2007. It is the largest airport in the country and is designed to facilitate 15 million passengers annually in its first phase.

Hardly seven months into its completion, a number of incidents such as the collapse of the false ceiling, choking of sewerage lines and presence of stinking water in offices occurred since the airport became functional.

Authorities had decided to shift all staff and workers to an alternative place when the customs cargo (airfreight unit) building started caving in — just six months after its opening in 2018.