Afghanistan on the brink

The only way forward is the Taliban way 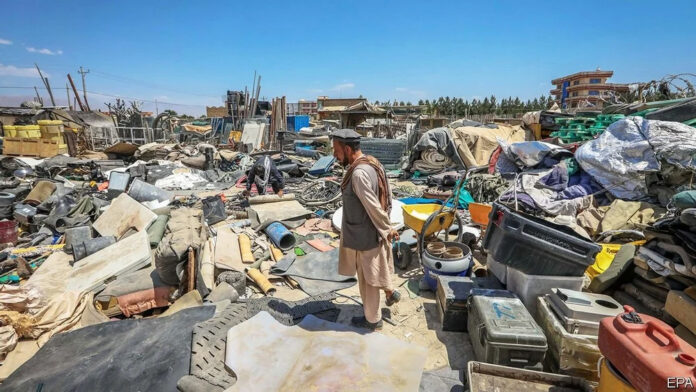 “I am tired and sick of war. Its glory is all moonshine. It is only those who have neither fired a shot, nor heard the shrieks and groans of the wounded who cry aloud for blood, for vengeance, for desolation. War is hell.”

War, they say, is hell. Imagine people who have suffered it for over 40 years as it drags on without an end in sight. They will possibly give hell a different meaning which others would neither be able to comprehend, nor associate with.

Afghanistan and its people are the victims of this seemingly endless war which has raged ever since the Soviets first attacked the country. There has been no respite as this savage conflict has uprooted generations of Afghan people, a large number of whom have taken shelter in the neighbouring countries including Pakistan where over 3 million refugees are still residing with no chance of them going back to their homeland. That, by itself, is a harrowing tragedy which those who have never been refugees would not be able to understand or empathise with.

If Pakistan is able to win the support of a majority of the Afghan leadership, and if the Taliban show flexibility emanating from maturity rather than weakness, peace could still be secured. Otherwise, it is for the Taliban to dispense with the country and its people as they may deem fit. Afghanistan is on the brink

Afghanistan has been on the brink for a long time. There has been war dating back to four decades ago which has left behind massive swathes of devastation, and there is war in front stretching into an immeasurable future with potential to inflict irremediable ruination and suffering. There are mountains of uncertainty to contend with as one bloody day gives way to another. For the Afghans, life has a meaning which is perpetually soaked in blood. There is virtually nothing else they can look forward to.

More than the ravages of the war, it is the absence of human understanding and kindness which has contributed to enhancing their afflictions. Notwithstanding the ferocity of the conflict ever since the US invaded the country in 2001, there has been a distinct opportunity over the last couple of years for the adversaries to forge a broad understanding for the cause of peace. But none of the parties has shown the flexibility necessary to move forward in that direction. Instead, all of them have become even more hardened– one because they smell victory is in the offing while the other remains obdurately unwilling to read the writing on the wall. The situation today is that district after district is being overrun by the Taliban with the government troops having either been slaughtered, or they have fled or surrendered together with truckloads of arms and ammunition.

For the USA, there was never a chance of winning a war where other equally formidable powers of their times had failed. It was only a question of prolonging it to when it would be deemed appropriate to order retreat. Unfortunately, that came way too late after the inadequacies of the US war machine had been fully exposed and it was humbled to request the very people it had accused of being “liars and cheats” to arrange a huddle with the Taliban to negotiate a peace deal. So, on 29 February  2020, the USA signed a withdrawal agreement with its nemesis, the Taliban, in exchange for a commitment that they would not allow the Afghan soil to be used for terrorist activities.

Two things should be remembered here. First, this was a deal signed by the USA exclusively with the Taliban with no representation from the Afghan government present and, two, the talk of there being secret clauses of the deal which had not been made public is untenable. The fact remains that a superpower would not agree to sit across the table to negotiate surrender with a party they had originally set out to destroy unless it believed that it had run out of all options to accomplish that. Furthermore, one would only do it with a party which had the right to rule as, otherwise, how could they furnish a guarantee without controlling the security dynamics? In simple words, the USA signed a deal with the Taliban only after they had recognised the Taliban as the future rulers of Afghanistan starting the moment ink was put to paper. This was way more than just legitimising the group which had been waging relentless war against the USA for almost two decades. It was accepting them as the bona-fide masters of a country that the USA announced to exit in exchange for a commitment for not initiating any terrorist activity.

It is not just that the USA had lost the war. By signing the deal in the manner it did, it had also damned the government in Kabul which, incidentally, was their own fabrication. It has been by far the most corrupt and inept administration selected to rule a country in the name of democracy. The elections, whenever held, were flawed. Each time, the USA had to intervene to reconcile the claimants to victory to share power, but each time they ended up running two parallel administrations, thus adding immensely to the fathomless confusion that plagued the country. So, rather than cultivating a democratic ethos, Afghanistan ended up creating a beneficiary elite which fed itself on the billions provided by donor countries and the largesse of the war and drug economies. But the insatiable lust for power and pelf has kept blocking the way of the incumbent government from proceeding with resolving the outstanding issues with the Taliban and pave the way for the induction of a consensus interim setup.

With the US and NATO forces having deserted the arena and the lightning advances which the Taliban have been making in the last few weeks with over half of the country now under their command and the rest threatening to fall in time, there is virtually no chance for the incumbent government to survive indefinitely. It was expected that, following in the footsteps of their mentors, they, too, would call for a negotiated settlement and pull the curtain down on the brutal loot spree that they have perpetrated in Afghanistan. But it appears that they have not yet given up on their insatiable greed for more. In the process, people continue to die and Afghanistan continues to bleed.

There is only one way Afghanistan can move at this juncture– the Taliban way. I have been saying this for a number of months, but there were some who possibly did not anticipate the monumental collapse to unravel with such suddenness. Now that it is happening, there is this one way forward: help the warring groups reach an understanding for peace. The proposed hosting of the Afghanistan Conference by Pakistan with the entire top Afghan leadership sitting around a table, which has now been postponed till after Eid, could provide the impetus in that direction.

Pakistan is keen to avert the prospect of any further prolongation of the war and is willing to extend all possible help to bring the conflict to an end. But the intransigence of the Ghani-Amrullah-Mohib triumvirate is blocking the way, with them hoping that they shall again be able to ignite rebellion on the lines of the former Northern Alliance. This thought-process is not owed to any sustainable strategy, but to the sheer hatred that they nurture for the Taliban on the one hand, and Pakistan on the other. Anything that is even distantly linked with Pakistan’s interest, peace in the instant case, is absent from their list of priorities. Since this threesome does not see their future in peace, they are insistent on keeping the embers of war burning. It is Ernest Hemingway who said of such people: “There is no hunting like the hunting of man, and those who have hunted armed men and liked it, never care for anything else thereafter”.

This cruel hunter breed, using their respective arrays of weapons, is bent upon prolonging the fratricide further. They neither have sympathy for their people nor love for their country. They would only do what will help them hold on to power and the exchequer. That not being a possibility any longer, they would much rather destroy than let peace dawn upon people who desire it desperately.

If Pakistan is able to win the support of a majority of the Afghan leadership, and if the Taliban show flexibility emanating from maturity rather than weakness, peace could still be secured. Otherwise, it is for the Taliban to dispense with the country and its people as they may deem fit. Afghanistan is on the brink.