Why Central Asia is growing

Potential and opportunities of investment 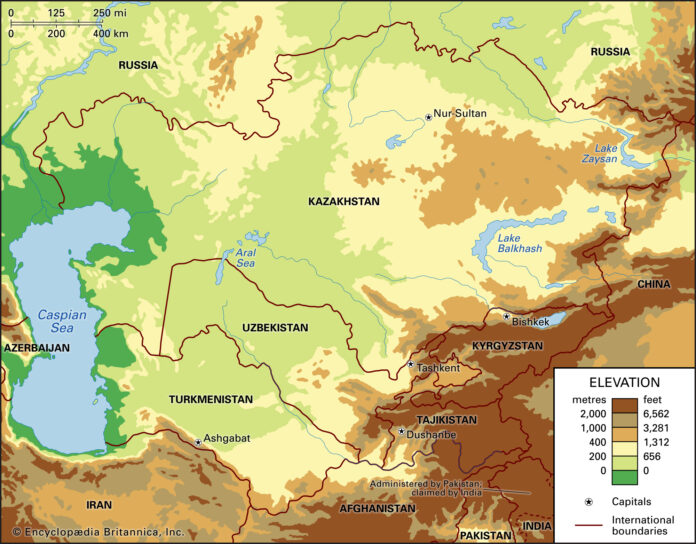 Central Asia is the heart of the world and in order to control the world, the region should be under the control of a power. Historically, the region was tied with its nomadic and silk route. It was also a crossroad for the movement of people, goods, and ideas between Muslims land and Europe, China and India. In the 19th century, there was a competition between Britain and Tsarist Russia to establish influence in the region and it might have been an effort for global balancing.

The influence of British gradually rose while Russia declined with the humiliating defeat by Japan in1905. After World War I, Imperial Russia collapsed, but it immediately re-infused itself as the USSR with Central Asia as five republics. From World War II, the USSR controlled the Caucasus and Central Asia and was able to preserve its dominance in the region until 1991.

After the disintegration of the USSR, Central Asia appeared with five autonomous states Kazakhstan, Kyrgyzstan, Turkmenistan, Uzbekistan, and Tajikistan. The landlocked states required cooperation of neighboring countries to enter world markets. The regional states have increased their geopolitical importance for the world. The states also have concentrated upon their economic growth and development. These countries are also improving the environment for investment and economic activities. The USA, Russia and China have focused their attention on developing economic ties with regional states.

Although there are some issues of good governance, which are inherited from the Soviet period, the contemporary regimes have well-managed. Thei foreign policy has been constantly seeking economic advantage and security. At the social level, the criminal groups have increased their influence across the region, with rampant corruption, narcotics, poverty, and terrorism threatening all five states in Central Asia. The states have planned to encounter this with the state apparatuses which are inherited from socialism- literacy, workers, infrastructure and so on.

The Central Asian states are seeking investment but the international community is more focusing on geopolitics. The regional states are pursuing economic cooperation and opportunities among themselves as well as with other countries. Initiatives to improve stability and political cooperation have paved the way for economic activities by countries like China and India.

Central Asia is a top investment destination. The most investment is in the natural gas, hydrocarbon and metals sectors to extraction, processing to transportation. The other destinations for FDI in the region are service sectors, real estate development, agriculture, trade, communications, labour, expertise, technology, manufacturing and infrastructure development. China, the European Union and Russia are major investors in the regional countries.

The region has two trump cards of educated youth and abundance of natural resources, while the environment for foreign investors is secure. China and India, the two rapidly growing markets, are interested in regional energy and mineral resources and have developed close relations with Central Asian states. After the reforms era, China has made progress in an investment-driven model for manufacturing and investment beyond the border. So it has vast scope of investment in Central Asia. ‘OBOR’ is a game-changing investment of China in the region, introducing it as a transit corridor for Asia, Europe and Russia.

The region has promising investment potential in petrochemicals, agriculture and tourism. These three sectors have a low level of foreign direct investment but with prioritization by governments, it may be boosted. The region has many petrochemical and agriculture commodities and raw material for processing. The region also has potential to serve in both the domestic and international meat market. Italy has invested in the beef industry of Kazakhstan and has been earning from it for several years. Another area of investment is textiles, which has immense opportunities for cotton and wool production. The Central Asian states have the same Soviet past but follow different directions for development aspirations.

Kazakhstan is the largest economy of the region, with 70 percent of its total investment. According to National Bank of Kazakhstan, the foreign direct investment has increased by 9.8 percent to $4.1billion in 2018. The main areas of investment are transport, mining, trade finance, information technology, communication and insurance. Last year, 17.2 percent investment in fixed assets has increased. A significant growth in industry 27.1 percent, construction 20.6 percent, real estate 20.1 percent and agriculture 14.2 percent is also calculated. The government has arranged a list of $10.6 billion projects and has made legislation to permit taxation and customs systems to attract investment in the country. The migration and visa process has been relaxed and the citizens of 62 countries can and travel Kazakhstan easily. The country has aimed to increase gross FDI inflow by 26 percent by 2022. That is why Kazakhstan is going to become the destination of global investment.

Kyrgyzstan is landlocked and mountainous with an economy of agriculture, minerals and reliance on workforce abroad. Cotton, wool and meat are main agricultural products. Other sources of income are gold, mercury, uranium and natural gas. The country attracts foreign investment in construction of dams, mining, gas production and agriculture sectors but most of the investment goes to mining. Due to conflicts between the local population and investors in a few districts of Kyrgyzstan the flow of investment has decreased. The country is facing few challenges to the Foreign Direct Investment, the economy minister Oleg Pankartov has stated, “The main problem is the lack of land plots to implement investment projects due to limited resources”. He further added, “There are difficulties of land transformation and limited energy capacity and poor infrastructure”. That is why FDI decreased 31.5 percent in 2018. The government is determined to solve these problems and facilitate to foreign investors. The main investors in Kyrgyzstan are Britain, China, Canada, Kazakhstan and Russia. In 2019, the World Bank reported the rank of the country is 70th out of 190 countries. Kyrgyzstan is among those who have made progress in terms of investment and protection. The trade with neighbours has boosted. However, the country has wide potential in investment, to make contracts and of payments.

Tajikistan is a more attractive country for the cross border investors due to its favorable environment for investment. The government is directing foreign investment to install new industries and modernize old industries. Aluminum, cotton, energy and tourism reveal potential of investment and attract foreign investors toward Tajikistan. The foreign direct investment in Tajikistan has increased from $270 million to $317 million in 2018. According to the United Nations Conference on Trade and Development, FDI stock in the country was $42.7 billion in 2018. The major investors are China, Russia, the UK and the USA have invested in the energy and banking sectors. Chinese companies are investing in agro, tourism, hydropower and steel production. From the last two years, China has invested more than $3 billion. According to the Chamber of Commerce of Tajikistan, China wants to create industrial enterprises with progressive technology and equipment.

Turkmenistan is an isolated country of six million people with rich natural gas reservoirs. The government tightly controls any foreign activities. Although the visa system is very complicated businesspersons and investors are frequent visitors. As the Turkmen language has long been in isolation, there are some difficulties to foreign businesspersons. Therefore, English is used by foreign businesspersons for the business activities in Turkmenistan. However, international investors have shown their interest in investment and trade with Turkmenistan. The country has potential of investment in agriculture, energy, construction and transport. The FDI stock was $36 billion in 2018, or 81.6 percent of GDP. China, Russia, Uzbekistan and Kazakhstan are the main investors in Turkmenistan. Due to the development of a market economy, Turkmenistan has planned to raise investment in fixed assets $65.72 billion by 2025, which will facilitate the manufacturing sector and will create many jobs in the country.

Uzbekistan has introduced such reforms such as liberalizing the foreign currency market, establishing economic zones and a visa for three years for people from foreign investment companies. Furthermore, the foreign investors who invest more than $3billion can get a residence permit for ten years. Within one day, a certificate of origin of goods will be issued to foreign traders. With the participation of international financial institutions, 89 projects were launched in 2019. Then 31 projects of more than $3 billion are also planned with the help of the World Bank and Asian Development Bank. Banks are able to open accounts for those who are Uzbek residents and businesspersons meeting the requirements of FATF.

In short, Central Asia is a top investment destination. The most investment is in the natural gas, hydrocarbon and metals sectors to extraction, processing to transportation. The other destinations for FDI in the region are service sectors, real estate development, agriculture, trade, communications, labour, expertise, technology, manufacturing and infrastructure development. China, the European Union and Russia are major investors in the regional countries. Chinese investment is growing quickly in all countries of the region. Other key factor of investment inflow is the rate of return on investment that seems positive.