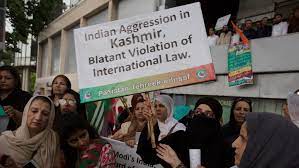 Pakistan has yet again reiterated its unstinted support to the Kashmiri people in their just, indigenous, unarmed struggle for freedom from forcible illegal occupation of India which is continuing with its brutalities and atrocities through its security forces.

The civil and military leadership of Pakistan has all along been extending its moral, diplomatic and political support  to Kashmiris, calling upon the United Nations to implement resolutions of its Security Council and letting the Kashmiris exercise their right of self-determination to resolve the more than seven decades  lingering Kashmir dispute, drawing the attention of international community to wake up from its deep slumber and condemn India for its gross human rights violation in its illegally occupied territory of Jammu and Kashmir and end the almost two years long complete lockdown on entire population of occupied Kashmir. They have been voicing their support for Kashmiris at all national and international forums and on every occasion and opportunity.

President Arif Alvi and Prime Minister Imran Khan reiterated unflinching support of Pakistan on July 13  when the Kashmiris on both sides of Line of Control, in Pakistan and around the globe were observing another martyrs day to pay homage to  their large number of martyrs during the last several decades. It was on 13 July 1931 when the troops of the Dogra ruler had brutally killed 22 Kashmiris one after the other in front of the Central Jail in Srinagar.

The Kashmiris are going to be victorious sooner and later, exercise the right of self-determination and be free from shackles of forced Indian slavery, slapping the faces of those who kept looking the other way while Kashmiris were bleeding and suffering. The day of their victory is fast approaching.

Indian invasion and forcible occupation of Jammu and Kashmir in 1947 has led to over 100,000 deaths of innocent Kashmiris, massive human rights violations and long jail sentences mostly without trials.

President Arif Alvi and Prime Minister Imran Khan in their tweet messages on July 13 paid glowing tributes to the Kashmiris for their courage and determination which remain deterred  against prolonged Indian subjugation  and reiterated that they stood with Kashmiris on yet another Martyrs Day.

They  emphatically stated that Pakistan would continue to provide diplomatic , moral and legal support  to the Kashmiris in Indian-Occupied Kashmir  till they achieved their cherished goal of freedom , while the entire Pakistani nation stood with  the Kashmiris in their just struggle  and would not compromise till their Kashmiri brethren and sisters got their right of self-determination as guaranteed by the resolutions of the UN Security Council.

It was none else but Prime Minister Imran Khan who had in his maiden address to UN General Assembly couple of years back had forcefully highlighted the lingering unresolved Kashmir issue telling the world body that Kashmir was a nuclear flashpoint between two nuclear neighbouring powers .Not only UN General Assembly but also on all international forums and in his interactions with the world leaders, the Pakistani Prime Minister has been  highlighting the Kashmir issue, calling for its peaceful solution in accordance with the Security Council resolutions for ushering in durable and stable peace in the region which otherwise remains threatened  by Indian PM Narendra Modi’s RSS philosophy of Hindutva.

For more than 72 years India has persistently illegally occupied Jammu and Kashmir against the wishes of the Kashmiri people and in the blatant violation of the Security Council resolutions and indeed its own somehow forgotten and intentionally ignored  commitments to the people of Kashmir.

It was on 5 August 2019 that India had also illegally and unilaterally sought to change the status  of the occupied territory  by ending its special status and making it part of the Indian Union, and deployed additional troops raising the number to around 900000 giving their brutal powers and imposing a military siege on all eight million kashmiris.

It is a matter of bitter record and shame on the face of the world body as well as the sleeping international community that the Indian occupation forces,  empowered with ruthless powers,  continue to use brute force including pellet guns against  peaceful protestors particularly the youth,  impose collective punishments ,resort to destruction of entire neighborhoods and houses in the name of searches,  killing hundreds of  innocent young Kashmiris in occupied territory unabatedly .

The United Nations, its Security Council, the international community at large, human rights organizations and others just keep on expressing concern over the tragic and brutal happenings in occupied territory of Jammu and Kashmir. They  do not and cannot exert due pressure on India and its Hundutva-minded Prime Minister Narendra Modi to stop brutal killings in Indian-Occupied Kashmir, implement UN Security Council resolutions and let the Kashmiris exercise their fundamental right of self-determination and decide their future themselves.

All major countries by and large have their trade, economic and investment relations with India and cannot barter away these for saving the bloodshed of innocent Kashmiris. Let the Kashmiris bleed and suffer.

But despite all their indifferent attitudes, the Kashmiris are going to be victorious sooner and later, exercise the right of self-determination and be free from shackles of forced Indian slavery, slapping the faces of those who kept looking the other way while Kashmiris were bleeding and suffering. The day of their victory is fast approaching.