Propaganda against Nawaz has termed him ‘anti-army’, says Maryam 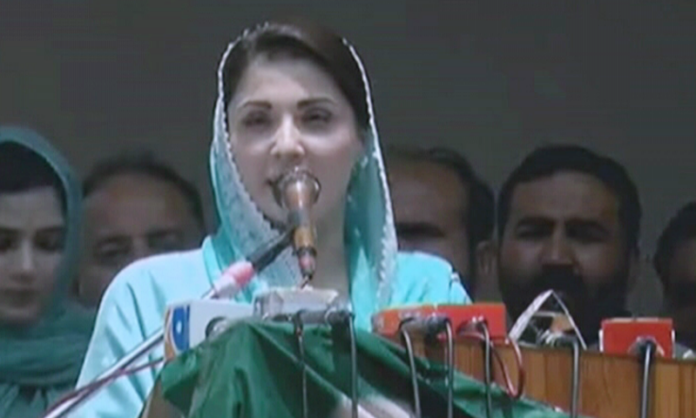 Pakistan Muslim League-Nawaz Vice President Maryam Nawaz said on Monday that many people crafted propaganda against Nawaz Sharif to show him as an “anti-army” force, further alleging that Prime Minister Imran Khan could not face Nawaz “in the ring”.

“Such elements should be ashamed of themselves,” she said while addressing a a rally in Azad Jammu and Kashmir’s Leepa Valley as part of her party’s campaign for the upcoming AJK elections on July 25, “because it was also Nawaz Sharif who had raised salaries of the Pakistan Army in his tenure.”

She added that Nawaz was a true son of the soil as “even his enemies acknowledge his patriotism.” Maryam emphasised that the former premier had criticised some individuals and not institutions, claiming that later some steps taken by the same individuals resulted in damage to Pakistan.

Hitting out at the Pakistan Tehreek-e-Insaf government for hurling corruption allegations at her party, Maryam said, “The way they labelled PML-N and Nawaz Sharif as thieves was ridiculous and such claims have been exposed by the courts.”

In this regard, she called upon “institutions” to follow the narrative of former prime minister Nawaz Sharif “if Pakistan has to progress”.

The PML-N leader alleged that Imran Khan couldn’t face Nawaz Sharif “in the ring, because he has no public support, hence he keeps his rival out of the ring on false charges”.

She also claimed that PM Imran colluded with the “selectors” to scandalise Nawaz Sharif but his own narrative rebounded on him. She said court verdicts attest to the truth that no corruption charges against Nawaz Sharif, Shehbaz Sharif, Hamza Shehbaz, Shahid Khaqan Abbasi or Khawaja Saad Rafique were proven.

She claimed that PM Imran “used all state resources but still could not prove charges against Nawaz”.

Maryam said even after being in power for three years, Imran Khan had to “steal” elections to defeat Nawaz, referring to the recently held polls in Gilgit Baltistan.

The PML-N leader said “Imran must remember that PML-N tigers would keep a watch on votes and not allow pilfering of the mandate.”

“I would advise Imran Khan to not waste his time by showing up in Kashmir because people here have given their verdict [in favour of the PML-N],” she added.

She also urged Kashmiris to change the perception that parties ruling in the centre always emerge victorious in the AJK elections because they provide financial aid to the region.

Maryam also castigated the premier for burgeoning inflation in the country, saying prices of medicines had skyrocketed.

“I fear the same may also happen in Kashmir if Imran Khan sets his eyes on the region.”

She said Imran Khan was visiting AJK to seek votes, and insisted that people “ask him whether he is coming to reverse the development of Kashmir that took place under the leadership of outgoing PM Raja Farooq Haider.”

She also resented her detention in “fake cases”, saying “the NAB also told me that my stance of calling a spade a spade resulted in my captivity.”

The PML-N leader asked Imran Khan to seek forgiveness from Allah for his actions in the last three years.

Earlier, responding to chants of ‘Go Niazi Go’ from the crowd, Maryam said she would prefer to say “Go Imran Go”, remarking that all Niazis were respectable to her.

It is pertinent here to mention that the rally led by the PML-N vice president at a college ground in AJK forced the cancellation of the intermediate exam.

The female students of the college were disrupted during the exam owing to the speeches from PML-N leaders, including Maryam Nawaz, on loudspeakers.

The principal of the college rather than asking PML-N leaders to stop the gathering decided to cancel the exam.

On the other hand, Special Assistant to the Prime Minister on Political Communication, Dr Shahbaz Gill on Monday said propaganda of Pakistan Muslim League-Nawaz would not work in Kashmir this time.

Responding to a statement of the PML-N leader, he said PML-N’s ‘forgery expert’ was selected for the election campaign in AJK. She resorted to lies instead of telling the worst performance of PML-N in Kashmir, the SAPM said.

He added that instead of going there and taking photoshop photos, it’s better to inform Kashmiris about your incompetence.  Incompetent people were ruling Kashmir for the last five years, he added.

Instead of fighting the Kashmir case, those who developed personal relations with Sajjan Jindal today disguised themselves as fake Kashmiris to seek votes, he said.

In past disqualified PML-N leader developed ties with India, instead of supporting Kashmir cause, he said adding, whereas, on the other hand, Prime Minister Imran Khan fought the Kashmir case aggressively and effectively.

Earlier, during her address to a public gathering on Sunday, Maryam Nawaz warned the incumbent government of a strong reaction if elections in AJK are “rigged”.

Addressing a rally in Hattian Bala, AJK, as part of her election campaign, the PML-N leader alleged that the Pakistan Tehreek-e-Insaf government was spending money to “buy votes” ahead of polls in Azad Jammu and Kashmir.

“If the govt attempted to rig elections in AJK, Raja Farooq Haider and PML-N would stage a sit-in Islamabad,” she added.

It is pertinent to mention here that other than the PML-N, the ruling party in Centre PTI and Pakistan People’s Party have also launched their election campaigns in the region.

Prime Minister Imran Khan has decided to address several public rallies in Azad Jammu and Kashmir ahead of polls set to be held on July 25.

with additional input from APP, INP