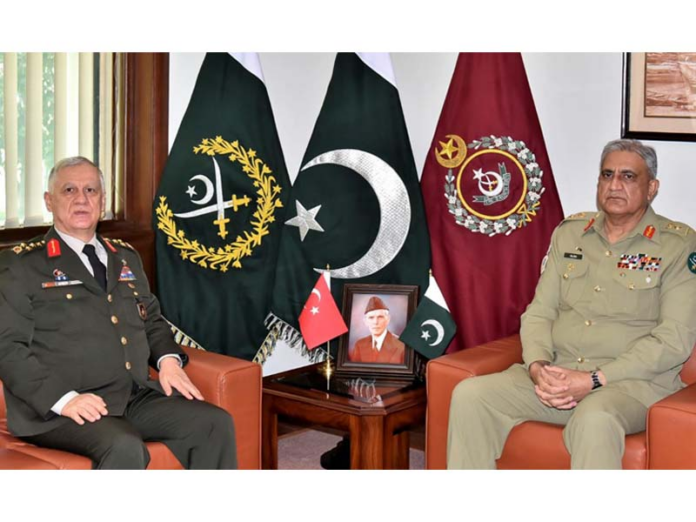 “During the meeting, matters of mutual and professional interest with special emphasis on defence and security collaboration between the two brotherly countries were discussed,” the Inter-Services Public Relations (ISPR) said in a statement.

Pakistan “highly values” its brotherly relations with Turkey which are deeply rooted in history and entrenched in our cultural and religious affinities, the communique quoted Gen Qamar as saying.

Both sides agreed to further optimise military to military ties particularly in training and counter-terrorism domains, it added.

Upon arrival, the visiting commander was also presented with a guard of honour by a smartly turned out military contingent, said the ISPR.

President Alvi reiterated Pakistan’s resolve to further intensify bilateral cooperation with Turkey in the areas of trade, defence and culture.

Talking to the visiting commander, he underlined the need for increasing cooperation with Turkey in various fields for the mutual benefits of the two brotherly countries.

Expressing satisfaction over the existing level of bilateral relations, the president said that both countries enjoyed exemplary ties which needed to be further cemented in the areas of trade and defence.

He expressed the hope that the agreement on military training cooperation between the two countries would further boost military ties.

General Umit said that Pakistan and Turkey are inseparable as they have a long history of cooperation based on common faith, values and historical linkages.

He further said that the people of Turkey views Pakistanis as their brothers and emphasised the need to promote cooperation in all aspects, particularly defence.

He thanked the president for the conferment of the Award of “Nishan-e-Imtiaz (Military)” on him.