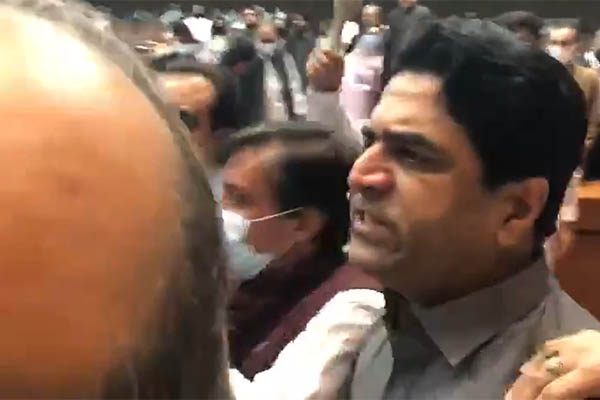 I don’t know what it is about Awans. I mean, hardly had we been treated to the sight all over the social media of Dr Firdous Ashiq Awan slapping PPP MNA Abdul Qadir Mandokhail on a TV talk show, that we had the same social media almost collapsing from the clips of Ali Nawaz Awan, PM’s Special Assistant for CDA, and MNA from Islamabad, who was shown using language that can’t be reported in a family newspaper like this, and which frankly, one is a little surprised that he knows.

But in a rare display of bipartisanship, the PML-N’s Sh Rohale Asghar said that bad language is a part of Punjabi culture. Obviously, Sh Rohale is more cultured than I, for Punjabi literature on both sides of the border is as free of bad language as any other. One simple test is that the Punjab Information Department does not take a more relaxed view of bad language in Punjabi newspapers than English. Bad language is as much depreciated by Punjabi women as their sisters in other provinces.

There is a myth that Sh Rohale might know about, for he belongs to a family with enmities, and both his father, Sh Asghar, and his younger brother Shakeel, were murdered. But while having close relatives murdered may incline one to swear, that does not mean the whole province should have its culture condemned. Does Sh Rohale like the stereotype about Kashmiris, for example?

Then what about the stereotypes about Pakhtuns? Has anyone accused Speaker Asad Qaiser of stinginess? Or stupidity? Speaking of speakers, what about the similarities between a WWF referee and the speaker? Of course, the ref doesn’t have anyone wanting him to make sure somebody wins. The speaker ordered six members banned from the house, including three from the opposition. More bipartisanship.

If you ask me, it’s all Abdul Qadir Mandokhel’s fault. He beat the PML-N candidate in the recent by-election, and went on a talk show, and Dr Awan mauled him. Was he in the House when Ali Sher got into action. I wonder if Awans have a thing about him.

Incidentally, somebody should check to make sure Ali Nawaz’s remarks don’t form part of the record. Just in case they do, they should be expunged. If anything could be called unparliamentary language, that was it. Speaking of speakers and unparliamentary language, Manzoor Wattoo, when speaker of the Punjab Assembly from 1985 to 1993, used the concept of ghairparlimani rawaya (unparliamentary attitude). Well, that was on show last week in the National Assembly. It wasn’t just a matter of a snatch of speech or a word, the whole attitude was not fit for any legislature. Heck, it wasn’t even fit for a union council.

We might remember that the signal for the 1958 Martial Law came when the deputy speaker of the East Pakistan Assembly was killed by a flung mike while presiding over a session in which a no-confidence motion against the speaker was being considered.

Both Speaker Asad Qaiser and Deputy Speaker Qasim Suri had better watch out. They’ve both got no-confidence motions moved against. They can take comfort in the fact that the National Assembly mikes are fixed at the desks.

In a flight of fancy, I had once wondered about how Speaker Wattoo would have reacted to one member murdering another on the floor of the house. I was sure he’d start by condemning the offending member for his ‘unparliamentary attitude. Little did I know that this is what the National Assembly would almost experience.

I see that the Balochistan Assembly has followed suit. When MPAs protested their constituencies being left out of the budget, the government took action. I’m sure the speaker knew what was happening. The assembly jurisdiction extends a certain distance outside the building, where the police need the speaker’s permission to enter.

Well, that’s one idea, now that the government has gotten into the action. Another idea was tried out on an old man, Muslim, in UP, while he was going to a mosque. A crowd got hold of him, and when he refused to raise a ‘Hay Ram’ slogan, they cut off his beard. And took away his watch phone and wallet. Imagine MNAs and MPAs being treated like that by opponents. Truly an unparliamentary attitude. But it saves the labour of having to think up a reply.