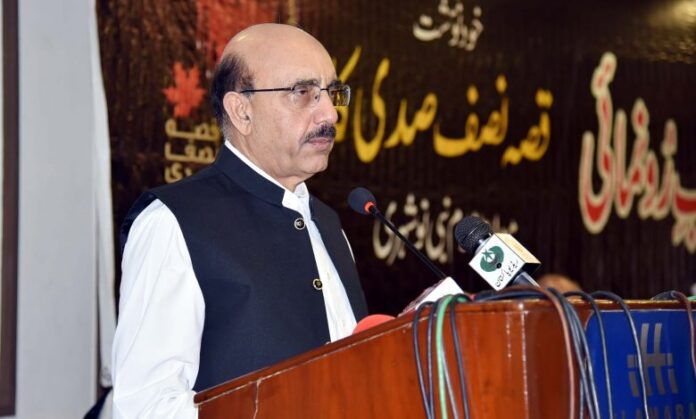 Terming the situation in the Indian Illegally Occupied Jammu and Kashmir (IIOJK) as alarming, the Azad Jammu and Kashmir (AJK) President Sardar Masood Khan has said that India and Pakistan cannot resolve the Kashmir issue without active participation of Kashmiris in the dialogue process.

“The people of Kashmir have immensely suffered due to unresolved Kashmir issue and they must be involved in finding a solution to the problems in the region,” Masood emphasised.

He made these remarks while speaking at the launching ceremony of a book titled “Qissa Nisf Sadi Ka” (tale of half century) authored by Ghulam Nabi Nowsheri, a leader of Jamaat Islami IIOJK.

“The talks held between Pakistan and India on various occasions since 1949 failed to yield results because Kashmiris were not part of the process. Now in the changed scenario, Kashmiri representatives must also be seated on the negotiations table in Islamabad and Delhi to find a viable solution to the Kashmir issue,” he asserted.

The AJK president said that the situation of occupied Jammu and Kashmir is highly frightening because Kashmiris are being deprived of their lands, business, and employment, rendering them dispossessed on their own territory. He went on to say that it is high time that all stakeholders revisit their strategy and adopt a practicable course of action for the freedom of Kashmir.

Khan cautioned that the entire Kashmiri nation is being exterminated in occupied territory and they are haplessly looking to the people of AJK and Pakistan to force India to end human rights abuses and grant the right of self-determination as promised by the UN Security Council resolutions and committed by the Indian leadership.

President Khan warned, “We must realise if the Kashmiri people lose their war in IIOJK, it would put in danger the security and integrity of Pakistan and Azad Kashmir. We need to rise up with a renewed resolve to raise the voice of the oppressed Kashmiri people on every forum of the world because terrorists in the Indian Army uniform are engaged in disintegrating Kashmir, eliminating the Kashmiri people, and rooting out every sign and symbol of Islamic culture in the state.”

Paying great tributes to Jamaat Islami for its role and sacrifices in the freedom movement of Kashmir, the AJK president said that Kashmiri nation would never forget the golden chapter of the party’s role in the liberation struggle. He maintained that the chief of Jamaat Islami Pakistan Sirajul Haq is a true Pakistani, who established his credentials as an honest leader and has always supported the Kashmiri people and Kashmir cause.

A district court in Lahore on Thursday remanded five suspects to police custody and two women to judicial custody in the case of kidnapping...
Read more
CITY

In Peshawar, green scheme for polluting bus owners inches along

PESHAWAR: When Mukhtiar Ahmed heard that a new public transport system with air-conditioned buses was coming to Peshawar, he worried his customers would desert...
Read more
CITY

MUZAFFARABAD: Nestled in the breathtaking mountains 221 kilometres (137 miles) away from Muzaffarabad, the capital of Azad Jammu and Kashmir, lies one of the...
Read more
CITY

PESHAWAR: Gunmen on Monday shot and killed a police officer assigned to protect a polio vaccination team in Khyber Pakhtunkhwa, an official said. It was...
Read more
- Advertisment -