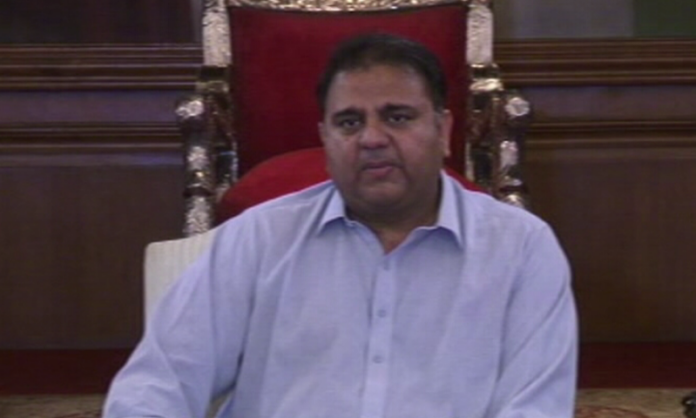 Information Minister Fawad Chaudhry Sunday urged the Supreme Court to enforce Article 140-A of the Constitution in Sindh to address what he termed as a “constitutional crisis” in the province.

Fawad Chaudhry stressed the need to ensure implementation of article 140 of the constitution in the province and said that there is a need for strong local bodies governments in the province.

“Local bodies elections should be held in the province immediately,” the information minister said while asking the provincial rulers as to how long they would run the province using contractors. “NAB has recovered billions of rupees of embezzled money from the province,” he blamed.

He lamented that the provincial authorities have failed to improve the abilities of the Sindh police and had only used it as a protocol force for them. “The police do not have the ability to maintain law and order situation on its own and in case of Rangers absence, they are unable to maintain security situation,” he said.

Fawad Chaudhry further lashed out at the Sindh government over rising incidents of street crimes in Karachi and said that citizens are being left at the mercy of the criminals, who could stop them at any nock and corner of the city and deprive them of their belongings.

“Is it not the police that is responsible to tackle such criminal activity,” he asked and said that a city as big as Karachi is unable to develop a police force owing to the incompetency of the provincial authorities.

“It shows that the Sindh’s water is being stolen by Bilawal House and Murad Ali Shah,” he said and asked as to why no complaints have been lodged regarding water scarcity from the lands owned by Asif Zardari and his sister and only poor had to suffer from these shortages.

The information minister termed Murad Ali Shah as a puppet chief minister of the province and blamed him for adopting nationalist politics setting aside the political vision of the Pakistan People’s Party’s founders.

He, however, rejected any move from the federal government regarding imposing governor rule in the province. “There is no space in the constitution for the imposition of governor rule,” he said while terming it as an undemocratic step.

He underscored that the fresh indicators have further minimized Pakistan Muslim League-Nawaz’s chances of winning the next elections and therefore they have started adopting a mantra blaming rigging in the next elections.

“They have outrightly rejected the use of electronic voting machines and right of voting to overseas Pakistanis without understanding the technological process,” the minister said.

Stressing that an amendment for use of the technology was just one of the 49 proposed by the government in the National Assembly, the minister said the opposition had the complete liberty to propose an alternative amendment on the issue.

“We have proposed the use of the technology because we want all parties to accept election [results] without raising any doubts,” he explained. “But the PML-N has realised that it has no chance of winning the next election and are already crying about rigging.”

“He (Iqbal) said overseas Pakistanis have little idea about [Pakistan’s] domestic issues. I want to ask him who are Nawaz Sharif, Hasan Nawaz, Hussain Nawaz and Ishaq Dar [then]?”

The minister said while these PML-N leaders were also residing abroad, the difference between them was that they had fled the country after “looting money”, while other overseas Pakistanis laboured and sent their hard-earned money home.

“I condemn the PML-N’s remarks [regarding overseas Pakistanis],” he said.

With additional input from INP