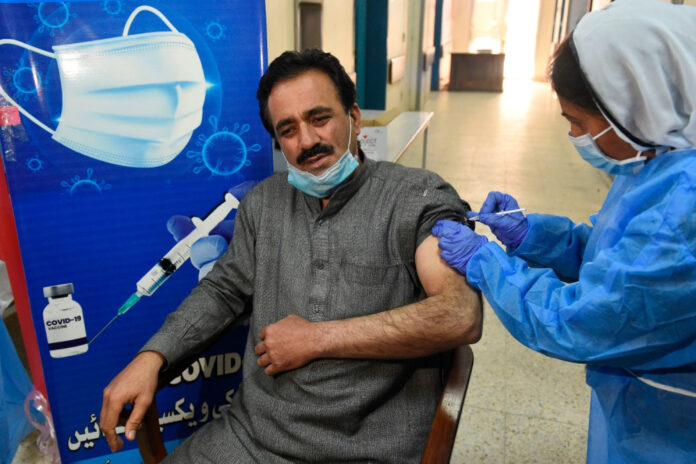 ISLAMABAD: The National Command and Operation Centre has declared anti-Covid vaccination obligatory for public and private sector employees, saying that all government servants will have to be vaccinated by the end of this month.

The decision to this effect was taken at an NCOC session held on Wednesday chaired by NCOC chief Asad Umar and co-chaired by National Coordinator Lt Gen Hamood-uz-Zaman Khan.

The forum also decided to slightly relax restrictions, put in place to curb the spread of Covid-19 during the third wave of the virus in the country, from June 15 onwards.

The NCOC meeting decided to reduce the closure of businesses from two days to one, allowing the opening of indoor gyms besides increasing the attendance in offices from 50 percent to 100 percent.

However, the Covid-19 vaccination will be mandatory for all gym members.

The meeting decided to lift the two-day weekly ban on inter-provincial transport, besides expanding the capacity of passengers in public transport from 50 percent to 70 percent.

As per the NCOC’s decision, conveyed following the meeting, only selective, non-contact sports will be permitted, while the ban on contact sports – Karate, Boxing, MMA, Rugby, Kabbadi, Wrestling and Waterpolo – as well as festivals and cultural and other events will remain in place.

However, a ban on the closure of shrines will remain imposed, and cinemas will also remain closed.

Current restrictions already announced by the NCOC regarding recreation, education sector, wearing of masks, railways and inbound passengers’ policy will remain in place till further orders.

Moreover, the NCOC has decided to keep all vaccination centres functional from 8 am to 10 pm daily from June 11 onwards. However, centres will remain open on Friday instead of Sunday.

The NCOC further informed that it is in the process of developing IT-based solutions for the verification of vaccination certificates, which shall be completed by end of June.

The forum decided that a countrywide mass vaccination campaign will be run under a three-pronged strategy and all citizens will be immunised on a voluntary basis, while certain incentives will be introduced for various sectors to encourage vaccination.

It was decided that all vaccination centres will remain open from 8:00 am to 10:00 pm daily from next Friday, except on Sunday. From Friday onwards, citizens of 18 years plus will be able to avail of the walk-in facility in vaccination centres.

Walk-in coronavirus shots will be available to all national identity card holders from Friday at mass vaccination sites, the National Command and Operation Centre announced Wednesday.

“From 11th June onwards 18 years+ citizens will be able to avail the walk-in facility in vaccination centres,” the body said in a statement.

He announced the milestone in a televised ceremony. He also urged people to get themselves vaccinated to return to a normal life.

Speaking at a ceremony held to mark the deliverance of the 10 millionth dose, Umar said about seven million people had been administered jabs, but cautioned the country had a long way to go to meet the target of vaccinating 70 million people by year-end.

“The more quickly we get ourselves vaccinated, the faster we would be able to rid ourselves of this menace,” he said, urging people to sign up for the shots so that businesses could reopen and life could return to normal.

Asad, who also heads the NCOC, said the government agencies, as well as the people, have done a commendable job in following coronavirus guidelines, resulting in a steady decline in new infections.

Supported by strict measures and vaccination drive, the nation reported a Covid-19 positivity rate below 3 percent for a second day on Tuesday, the NCOC announced.

According to the data from the body, the authorities conducted 43,900 tests on Tuesday across the country bringing out 1,118 new cases with a positivity rate of 2.54 percent, down from 2.95 percent a day earlier.

Earlier in March and April, the country witnessed a positivity ratio of over 11 percent several times, leading the government to impose sweeping measures. At the start of May, the ratio dropped to below 10 percent and it went down to below 5 percent on May 22 and finally fell to below 3 percent on Monday.

“We have seen that when Pakistanis, as a nation, decide to achieve something, then they achieve it [no matter the circumstances],” Umar said.

In the last 24 hours, the NCOC reported 77 Covid-related deaths. The government portal has registered a total of 936,131 cases and 21,453 deaths since the outbreak in February last year.

The government launched a nationwide vaccination drive, starting with older people and frontline healthcare workers, in March. The drive began with a focus on the oldest people in the community, generally over the age of 80, and worked its way down.

Battling a third peak of the virus, the Health Department began the campaign with Chinese Sinopharm and CanSino jabs.

Private hospitals in major cities are also using the Russian Sputnik-V vaccine that has been imported by a local pharmaceutical company.

Initially, the government had to deal with vaccination hesitancy and a shortage of vaccine supplies and had limited shots to people aged 30 or over.

But with purchases from China and allocations from the World Health Organisation and the GAVI Vaccine Alliance, the government has now secured more than 18 million doses and is keen to get them out into the population.

The government on Tuesday also opened a first drive-thru vaccination centre in Lahore to help the district administration achieve its “target of vaccinating around 7 to 8 million people in the next six months”, Deputy Commissioner Mudassir Riaz said.

Observing that only a higher vaccination rate would make full reopening possible, Riaz vowed to open more such points in other locations of the city to facilitate people.

From the beginning of its campaign in March up to Wednesday, the NCOC counts more than 2.5 million people fully vaccinated and more than 4.7 million partially vaccinated.