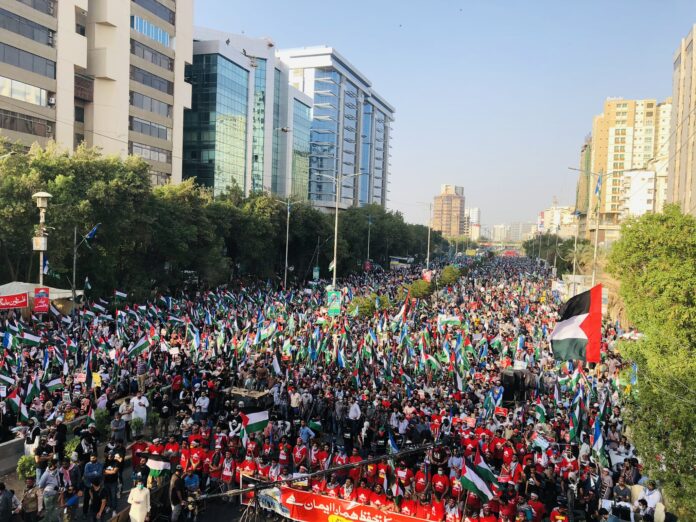 KARACHI: Tens of thousands of marchers packed the main street of Karachi on Sunday to voice solidarity with the people of Palestine.

Waving Palestinian flags, and chanting slogans “Labaik ya Aqsa”, and “Down with Israel”, the marchers rallied at Shahrah-e-Faisal.

Thousands of women, some of them carrying infants, also took part in the rally, organised by Jamaat-e-Islami.

“Al-Aqsa, your defense is our faith” was engraved on a large banner carried by a group of women, while another group of youth attired in t-shirts bearing pictures of Al-Aqsa Mosque, carried a huge Palestinian flag in the middle of the rally.

The rally, the biggest show of solidarity in Pakistan since the recent Israeli escalation, was attended by the leaders of different Sunni, Shia, and Christian organisations.

In his telephone message, Ismail Haniyeh, the head of Hamas, noted that the entire Muslim community is throwing its weight behind its traditional support for Palestinians following the Israeli aggression.

“Israel wants to usurp our lands and we will never let it happen. Our brave people have defeated the occupying forces in this battle, which has exposed Israel and its nefarious ideology,” Haniyeh went on to say.

“Our resistance carries the blood of our elders, youths, women, and children. We will never compromise on that,” he said, adding that the Palestinians’ resistance has proved that their struggle is just.

Addressing the rally, JI chief Sirajul Haq congratulated Palestinians and Hamas on their “successful” resistance against the Israeli forces.

“You can destroy homes, kill unarmed women and children, and bomb civilians but you cannot destroy the resistance, which will continue until Palestine is free,” Haq said.

Criticising the role of Western powers, especially the US, for their failure in halting the Israeli aggression, he said it was not the UN or America but an unbelievable resistance of unarmed Palestinians that forced Tel Aviv to a cease-fire.

The entire nation, he maintained, stand beside Palestinians in their just struggle.