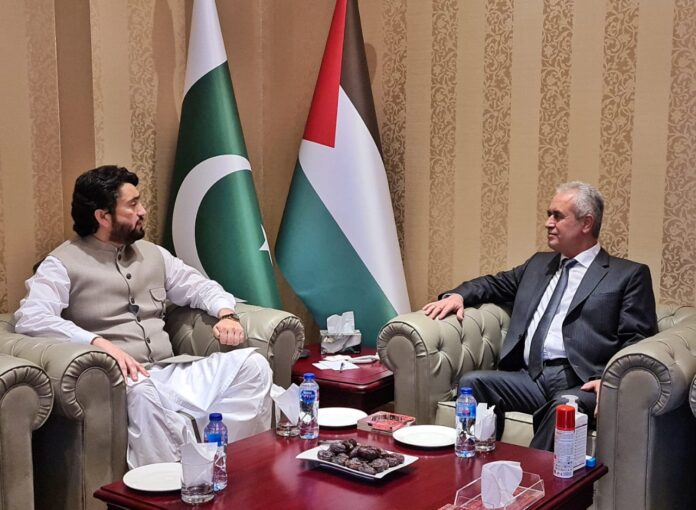 He said that Pakistan has special connection with Palestine and all political parties of Pakistan are united over the Palestine issue. “We have been closely observing developments taking place in Palestine. A meeting of OIC was called immediately for the protection of Palestine. The so-called champions of human rights are nowhere to be seen over the killings of Palestinians,” he said.

“Except for a few voices supporting the Palestinians, the world is silent or standing with the illegal Israeli administration,” he said and added that the world needs to speak for Palestinians, who are rightful owners of their lands occupied by the Israeli government.

He said that a pragmatic approach needs to be adopted by the Muslim countries and Israeli atrocities need to be stopped immediately against the people of Palestine.

“Muslim Ummah needs to stand united and convey a message to the world that no more Israeli terrorism against Palestinians would be tolerated,” he said.

Afridi said Prime Minister Imran Khan is standing tall to support the Palestinians. “Demographic terrorism is being implemented by the illegal occupational regime against Palestinian people. It is unfortunate that Muslims are divided on sectarian and regional lines. Prime Minister Imran Khan has taken steps to remove misunderstandings between the Gulf states. Pakistan stands right behind Palestine and Pakistan would keep raising its voice for the cause of Palestine,” he said.

“PM Imran Khan speaks from his heart on Palestine issue. Palestine and Pakistan have deep-rooted ties since decades,” he said.

He said that around 300,000 Palestinians were attending prayers in Al-Aqsa mosque during Ramadan, which made the occupational regime concerned.

He said the occupational regime of Israel is involved in replacing Palestinians from Sheikh Jarrah area. “200 Israeli jets have destroyed around 1000 houses and killed 200 Palestinians, including women and children. They are targeting civilian people and using sophisticated weapons. The Western countries say the occupational regime of Israel has right to defence but they do not accept the right of defence of Palestinian, who are rightful owners of Palestine,” he said.

The Supreme Court of Pakistan (SCP) has directed the Karachi administration to raze the Pavilion End Club and end all commercial activities on an...
Read more
CITY

The Cabinet recently decided not to allow PTV to get its feed of the matches with England during the tour there from an Indian...
Read more
CITY

Punjab budget likely to be unveiled on Monday

LAHORE: The Punjab government has planned to put together a budget of about Rs2,600 billion for the fiscal year 2021-22, with the development sector...
Read more
CITY

Kashmiri woman inspires with 20 years of service to wildlife

SRINAGAR: On the evening of June 2, Aliya Mir in Indian Illegally Occupied Jammu and Kashmir (IIOJK) received a call to rescue a snake from...
Read more
CITY

LAHORE: Amid the ongoing spell of the heatwave, the Punjab government on Friday changed the government and private school timings. According to the announcement, the...
Read more
CITY