Everyone must be ready 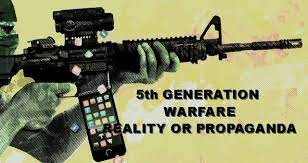 In the truest sense, the constant repetition of phrase ‘fifth generation warfare’ by our military leaders in every media conference has been true in the light of the exposition of the Indian sinister campaign against Pakistan in the ‘Indian Chronicles’. Those who were mocking the idea of fifth generation warfare in the context of Pakistan need to revisit their opinions, suggestions and warfare analysis.

Needless to say, Pakistan is facing enormous threats across its borders. The temperature has been red hot in the eastern and western borders of the country. Since India’s Modi government, in its absolute fascistic endeavours, took over the Valley of Kashmir, the idea of fifth generation warfare has become incredibly important to understand the volatile and emerging situations. While India is accusing Pakistan regardless of its pathetic human rights violations in Kashmir, it seems that the war of demonization continues between these two arch-rivals.

Technically speaking, the dossier that Pakistan has recently published of its intelligence reports which clearly indicate the network of India that has been put in place to malign Pakistan and to achieve its ominous ambitions. In the light of the possible threats, Pakistan has to protect the CPEC projects from India and all the workings going on along the One Belt One Road projects as we have undeniable evidence of the threats to the projects. Amid the rivalry of India and Pakistan, there is a play of world superpowers as well, as both America and China want to expand their influence in Asia, and the Middle East.

If One Belt and Road initiatives stand tall in the face of the foreign-funded attacks they would become the strength of the country in the near future. Along with protection of the OBOR projects Pakistan needs to understand the fact that it needs regional players to take part in OBOR extension to raise the stakes in it so that other regional actors will help in making OBOR a successful economic venture. Since South Asia has been at the centre of war for the last three decades only economic success is deemed to cut this root out. It will hopefully find avenues got people who have been radicalized because of the prolonged War on Terror and the subsequent longest war of America in Afghanistan.

The root cause of the Pakistani society of becoming violently rogue has been due to the pathetically designed strategic policies. Now, every effort on the part of the state must ensure economic progress. Wading into foreign wars, in the name of saving Islam, has proved detrimental and counterproductive. The recent dossier that Pakistan has published largely identified this fact that the fallout of extremism and the wide network of India has exploited the regional issues, especially secessionist movements, in the country. It is time for our state to take responsible actions against these terror hideouts. Naming them or just publishing a dossier would not make a difference until the whole infrastructure of the terror sites is razed down to the earth.

Fifth generation warfare has been true in the context of Pakistan. To understand this, we need to connect the dots. The connection of Pakistani intelligence dossier, to attacks inside the country, to the Arab Goswami case and to the Indian disinformation lab proves that fifth generation warfare is being carried out against us. It is time to rethink on these lines as we will have a tough time in balancing our economy through OBOR, and opening intra-regional trade, if political instability continues.

The intelligence report that Pakistan has published certainly brought some results to the fore. One, India has been demonized subsequently more prominently in the Arnab Goswami case where it has been openly told to the world that India had fake surgical strikes inside Pakistan. This whole drama was just a political tactic by the BJP to win in the general elections. This proved to the world that India has been maligning Pakistan and its interests in the world. But things are unsettling now. The time has come for India to take upon itself the weight of  its sinister plans against a neighboring country.

It is also theoretically important for the state of Pakistan to really see the emerging trends through the lens of fifth generation warfare, as the military cadre has been pointing repeatedly in every media conference. If one sees the attacks on the infrastructure of the OBOR, insurgent activities along the Durand line, and through the case of Aranab Goswami case, it is vividly clear that the nefarious activities in the guise of fifth generation warfare are true.

There are many political commentators who have downplayed the visible threats of fifth generation warfare, calling it a facade because of their abnormal understanding of the emerging situation in south Asia. That is why to understand a situation like surgical strikes, that too fake ones, one is left with no choice but to look up to the themes like fifth generation warfare.

Until we expose India and our many other enemies through precise and strategic actions with the help of our strategic thinktanks, Pakistan will not grow economically because for economic ease peace is the necessary condition. The core strategy of India so far has been to deploy maximum pressure upon Pakistan. It is true that India has been successful in some way to malign Pakistan. Visibly, Pakistan has made a lot of investment in the building up of the infrastructure for OBOR projects but apparently our intra-regional trade has dipped to 7.4 percent, down from 12.2 percent in 2011. It means we have been massively slowed down by India with the help of the raising of the temperature at the borders and by planning attacks inside the country.

All in all, fifth generation warfare has been true in the context of Pakistan. To understand this, we need to connect the dots. The connection of Pakistani intelligence dossier, to attacks inside the country, to the Arab Goswami case  and to the Indian disinformation lab proves that fifth generation warfare is being carried out against us. It is time to rethink on these lines as we will have a tough time in balancing our economy through OBOR, and opening intra-regional trade, if political instability continues in the country.

Aqsa Batool
The writer is a freelance columnist