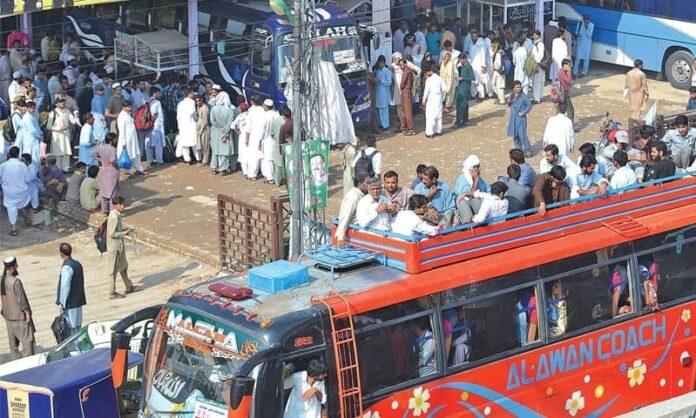 LAHORE: The Punjab government has decided to ban inter-district public transport in the province from May 10 due to increased number of Covid-19 cases.

The decision was taken during a meeting of the provincial government. The ban on public transport would come into place from 6:00 pm on May 10 to 6:00 am on May 15. The meeting to review the Covid-19 situation in the province was attended by provincial ministers Raja Basharat and Dr Yasmin Rashid, chief secretary, and some others. In the meeting, measures to mitigate Covid-19 spread, increasing the number of vaccination centres, and other issues were discussed.

Law and Parliamentary Affairs Minister Raja Basharat said that they are reviewing the Covid situation on daily basis and the masses should act responsibly and adopt precautionary measures. Health Minister Dr Yasmin Rashid said that there was no shortage of doses at the vaccination centers. “We are administering more than 100,000 doses of Covid vaccine in a day,” she said, adding that the vaccination’s capacity would be increased with the passage of time.

On Thursday, Sindh Transport Minister Awais Shah had announced the closure of public transport from May 8 to 16 in the province. He had stated that the inter-provincial, inter-city and tourist transport will be closed in the province during the said period. The decision, however, will not be enforced over the movement of vehicles within the city, he added.

The province had earlier requested the National Command and Operation Centre (NCOC) to impose a ban on inter-provincial transport.