The project will be completed by April, 2022 and the mosque will be restored to its original shape 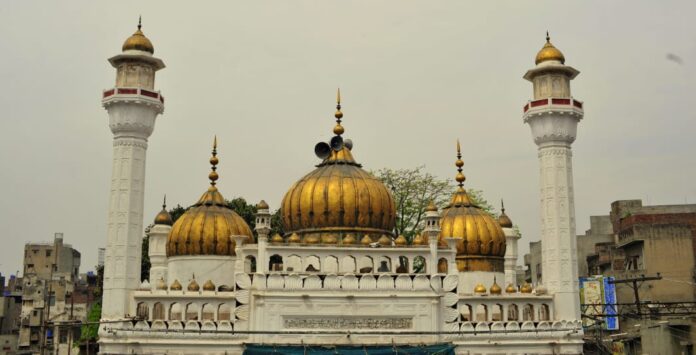 According to details, the project will be completed by April, 2022 and the mosque will be restored to its original shape and form.

A tourist guide of WCLA, Mohammad Javed, informed that the mosque was one with gilded domes and was one of its kind. “This is a small mosque as compared to the other mosques of Mughal era in the walled city of Lahore. The mosque has three gilded (golden) domes, which are the main features and focus points of this mosque. Because of its gilded domes, this mosque is named Sonehri or Golden Mosque since the time it was constructed. Four tall minarets add to the exquisiteness of the mosque. The mosque was built in 1749-53 AD by Nawab Mir Syed Bhakri Khan, the naib subedar of Lahore at the time when Mir Moin-ul-Mulk was the subedar during the reign of emperor Mohammad Shah,” he said.

The officer on site informed that the work to be carried out includes wood work and new doors. “Other works include brick tiles on the edge of flooring with special design, structure consolidation, lime plaster, restoration of Ghalib Kari work, plumbing work, debris removal, electrification and illumination of the mosque,” he said.

WCLA Spokesperson Tania Qureshi said, “Once this mosque is restored to its original glory, it will add a beauty to the royal trail. This mosque is located at the Rang Mehal Chowk and becomes a part of the royal trail. This mosque because of its golden domes and exquisite fresco work has always attracted the tourists. I am sure that once it is restored and opened for the public, it will be a hotspot of tourists.”

WCLA Director Conservation Najam Us Saquib said that the project is of one year and the work would be completed by April, 2022. He said, “We are taking all measures of international level while restoring this mosque. Intricate work has been done on this mosque and therefore we are working very carefully to meet the international standards of conservation and restoration. The total cost on the project is Rs21.304 million. This mosque will make part of the royal trail and it will be illuminated like other monuments so that the tourists can experience it during night time. It will also be a facility for the people, who go there to offer prayers. They would enjoy the ambiance of the place.”