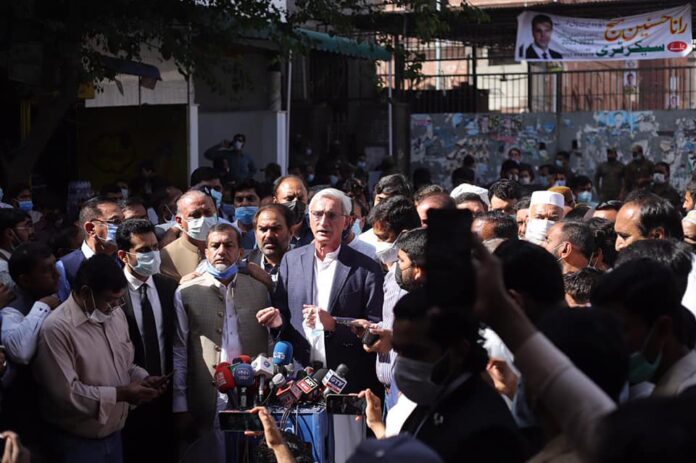 ISLAMABAD: Estranged Pakistan Tehreek-i-Insaf (PTI) leader Jahangir Tareen on Saturday demanded a “free and fair probe” into the cases of money laundering and corporate fraud registered against him by the Federal Investigation Agency (FIA).

Tareen was speaking to the reporters outside a district and sessions court in Lahore where he had gone in connection with the cases after the expiry of bail granted to him and his son Ali Tareen. During the hearing, the court extended the bails until April 22.

Last week, a banking court in Lahore had granted one-week pre-arrest bail to them.

The agency had booked the two in March in the light of findings of the sugar inquiry commission that had accused several sugar producers — including Tareen — of “underreported sales and fraud”. Tareen had rejected the “fabricated” charge sheet and denied any wrongdoing.

Speaking to reporters, Tareen said, “Conduct an inquiry [into the scam] by all means. But the team probing the charges is not impartial. It is carrying out the investigation on someone’s directions.”

“I demand that a fair team be constituted for the investigation which is not mired in controversy and works according to the law, and not on someone’s phone call,” he said without mentioning any names.

When asked, Tareen clarified that he was not trying to escape the clutches of the law. “The PTI is my party. It is our party. If we don’t stay within the party, where else will we go,” he questioned. “But right now we want justice.”

“New people should be brought in [and] a new team should be constituted. Look at this again, it will not make a difference. You have a lot of time. But do not entrust the responsibility to those that give orders on telephone calls.” He again did not elaborate who was involved in these calls.

He claimed that the FIRs registered against him were drawn up in Islamabad and sent to Lahore on a USB where they were signed. “This should not happen. The investigation should be carried out in a fair and objective manner.”

On Friday night, some 29 lawmakers of the ruling party had gathered at a dinner meeting held at Tareen’s Lahore residence to express solidarity with him. On Saturday, again, 30 MPs appeared alongside Tareen.

Speaking on the occasion, PTI MP Raja Riaz said that the legislators standing alongside Tareen stood in solidarity with him, adding that Prime Minister Imran Khan was their “leader and captain”.

“All those lawmakers that have gathered here today have one request to make. PM Imran there are people around you that are targeting Tareen, an extremely valuable asset to the party.”

Fake cases have been registered against him, Riaz said.

On Friday, Tareen had briefed the party members over what he had called the ongoing “witch-hunt” against him allegedly by Principal Secretary to Prime Minister Azam Khan.

According to the sources, the MPs had assured Tareen of their full support against what they had called the feudal and bureaucratic mindset determined to destroy the gains of Prime Minister Imran Khan.

Addressing the participants, Tareen had said he had decided to make another sacrifice for the nation and challenge the autocratic mindset prevailing around the prime minister. He had said that in the next meeting, new faces would appear and the rebellion against the principal secretary would continue to get stronger.

Meanwhile, Foreign Minister Shah Mahmood Qureshi said if Tareen has any reservations on the action against his sugar mills, he should meet the premier.

Qureshi said that 17 sugar mills have received notices and only one of them belongs to Tareen. He said that Tareen has categorically made two things clear that neither he is establishing a forward bloc in the party, nor he is leaving the PTI. He said there is no threat to the PTI government from Tareen. “Every MNA is loyal to PM, Tareen poses no threat,” he further said.