No one wants the sun sighted for prayers, do they? 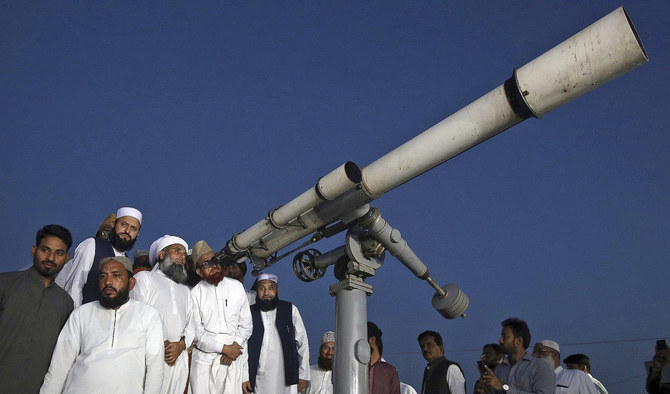 The approaching Holy month of Ramzan will once again bring back the conundrum of moon sighting in Pakistan, which has recently become controversial. Whereas the Ruet-i-Hilal Committee, headed earlier by Mufti Muneeb ur Rehman (now by Maulana Abdul Khabeer Azad), asserts on the early Islamic practice of actually sighting the moon, the Ministry of Science and Technology announces the entire Islamic calendar beforehand based on scientific calculations. This got me thinking and I wondered why we, as followers of Islam in general and as a nation, in particular, haven’t switched to scientific-based lunar calendars that can easily be prepared by astronomers in this day and age.

In this regard, I found a very well-written piece by Dr Zulfiqar Ali Shah of Islamic Research Foundation International Inc. wherein he argues by using Islamic verses and Ahadith, how actual moon sighting is not a requirement. Four main arguments of the proponents of moonsighting are refuted in this piece after an in-depth analysis and anyone interested in the deep religious debate should give it a read. However, I will discuss some basic arguments that might convince a rational mind for the adoption of the scientific method in determining the start of a new lunar month. Proponents of moon sighting base their argument on Hadith of Rasulullah (PBUH) in Sahih Bukhari (Hadith 1900) where he says: “When you see the crescent (of the month of Ramadan), start fasting, and when you see the crescent (of the month of Shawwal), stop fasting; and if the sky is overcast (and you can’t see it) then regard the month of Ramadan as of 30 days.” Consequently, they argue that there are specific instructions for sighting the crescent before starting a new month.

It has been way too long for this scientific knowledge to exist and not being utilized by Muslims. Its adoption will provide so much certainty and will hand over the duty of ascertaining the birth of the moon to scientists who actually possess the requisite skills. May we soon get out of this time-wasting debate and spend our energies in more productive pursuits

However, many modern scholars have tried to put this Hadith in its context. They opine that as the only method available at that time to ascertain whether the new moon had been born or not was to see it through the naked eye, the Prophet (PBUH) asked for it. Similarly, they argue, that to ascertain prayer timings at that time, a stick was affixed in the ground and its shadow was used to determine the time of prayers. That was the available technology that was adopted accordingly.

Furthermore, the people of Arabia were not so knowledgeable about the art of astronomy. The prophet gave these orders in the above-quoted Hadith keeping the situation in mind. So the main objective was to ascertain whether the new moon had been born (that is, the. new month had begun) and the method to achieve that objective may vary over time. Now the same objective can be achieved through a more authentic method of astronomical calculations which should be utilized. Today, modern science is capable of predicting the new moon extremely accurately. Therefore, it is natural to utilize this new technology.

Furthermore, this notion that sighting of the moon was prescribed for the certainty of the start of the new month and not as a requirement, is strengthened by the fact that it is not required on the 30th day of a month. As the Islamic month cannot be more than 30 days (which we know because we have observed it throughout human history), the certainty of the start of a new month is achieved on the 30th day. Therefore, if this same certainty can be achieved through a modern scientific method on the 29tH day, then sighting of the new moon won’t be a requirement.

The religious leaders, however, are adamant about the need to witness the new crescent. On the one hand, they advocate this old practice of moon sighting while on the other they adopt scientific calculations where they find it convenient. There is a need to highlight this contradiction in the practice of these religious leaders. For instance, the daily prayer timings were determined by the position of the sun and the length of shadows. The time of breaking and opening of fast was also required to be determined by observing threads of light and darkness (2:187). But do we see these leaders observing shadows and light to ascertain prayer timings? Rather, they rely on watches and clocks created through science. They rely on the annual prayer timing calendar created by scientists by observing the movement of the sun over time. If such a calendar is adopted by the religious clergy, why can’t the same be done in the case of a lunar calendar?

Another situation also raises the question of the need to look at the moon to ascertain the start of a new month. For instance, some islands in the Caribbean face long spells of rain, which may sometimes extend up to 6 months. In such a scenario, the cloud cover makes it impossible to spot the moon for that entire time. If the people go with the assumption of a 30 day month for 3 to 4 months, they may sight the moon on the 27th or 28th day when the sky clears. Therefore, the Shariah for all times and for all places did not intend sighting as a requirement but as a method to achieve the objective of Shariah, a method which was available at that time.

Muslim religious leaders have always been on the wrong side of history whenever it comes to the adoption of scientific inventions. Be it loudspeaker or television, religious leaders always opposed these inventions, only later on adopting them. It has been way too long for this scientific knowledge to exist and not being utilized by Muslims. Its adoption will provide so much certainty and will hand over the duty of ascertaining the birth of the moon to scientists who actually possess the requisite skills. May we soon get out of this time-wasting debate and spend our energies in more productive pursuits.