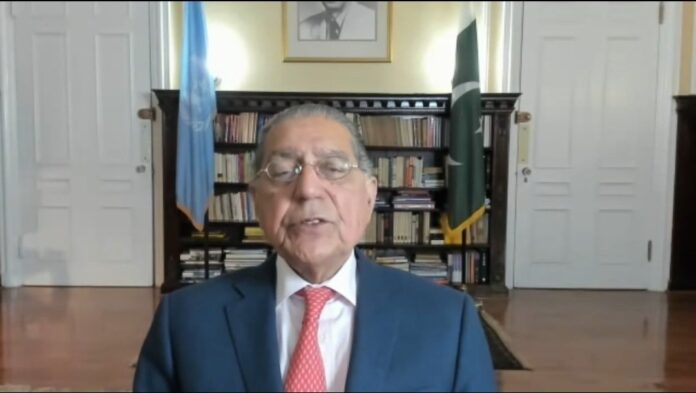 NEW YORK: Active diplomacy exposed the reality of India’s oppressive policies against Muslims in occupied Kashmir and in the region, said Pakistan Ambassador at the United Nations Munir Akram on Tuesday.

In an interview with a Pakistan Television (PTV) programme, the ambassador said that people in various parts of the world, including the West, now recognise the “nature” of new India, which he said has a fascist face with an ideology of hate against Muslims as well as other minorities.

“India’s attempt to depict Pakistan as a sponsor of terrorism and so forth is producing diminishing results because India’s own reality is now exposed to the world,” he added.

Ambassador Akram also said that India had failed in its campaign to isolate Pakistan which he said has emerged as a prominent member of the international community.

“We are an important player in the region, within the Islamic world, within the United Nations,” he said. “Pakistan cannot be isolated.”

Pakistan, under the leadership of Prime Minister Imran Khan, has played an active role in exposing Indian policies in the region as well as the nature of the regime ruling the country, he said.

Ambassador Akram also vowed to keep pushing for a change in New Delhi’s policies so that it accepts applying the principles of the UN charter in its dealings with Pakistan.

He said that the prime minister’s pathbreaking speech at the United Nations in September 2019, where he spoke openly and from the heart, had brought Pakistan’s firm commitment to the Kashmir cause into the sharp focus of the international community.

He said that the Kashmir dispute was fully alive at the UN — it is on the active agenda of the Security Council, and “we will try to keep it alive because it exerts pressure on India”.

Pakistan, he said, took a “bold step” to take the issue to the Security Council after almost 50 years, a move that past governments were reluctant to make.

The Security Council, he said, discussed the dispute thrice, underlining the fact that it is an international dispute, not an integral part of India as New Delhi claims.

Hence, the existence of the legal basis of the dispute has to be kept up and raised at the United Nations and the Security Council which stand for the resolution of the Kashmir dispute through a plebiscite, Akram said.

“We will keep up the pressure and keep raising the issue at the Security Council, but apart from that, in the UN Human Rights Council,” he said, noting over 50 countries had joined Pakistan in a joint statement, right after August 5, 2019, in denouncing India’s unilateral move to annex the region.

18 UN special rapporteurs have sent two communications to the Indian government, questioning human rights violations such as summary executions, disappearances, collective punishments, treatment of journalists, and a whole range of issues, saying that human rights were in free fall in India, especially in held Jammu and Kashmir.

“India has to respond to this [to special rapporteurs communications],” the ambassador said, adding that Pakistan will keep up the pressure on India.

A composite dossier of India’s sponsorship of terrorism, he said, was also shared with the UN secretary-general who has promised to study it and give his responses to the evidence. He said that he had also written to the Security Council in this regard.