Another doctor dies of coronavirus 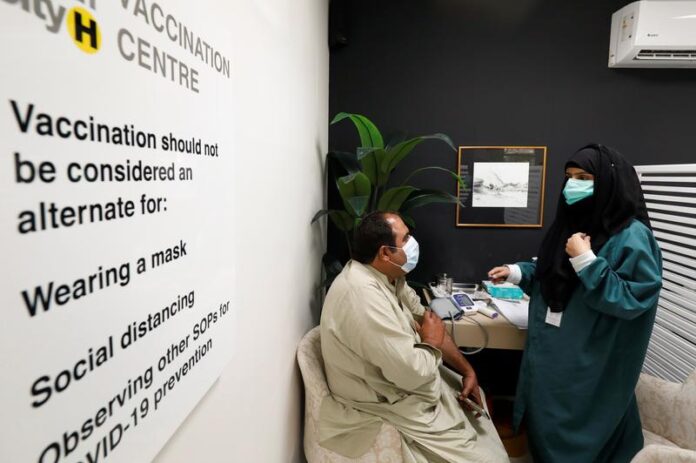 ISLAMABAD: The government has administered coronavirus vaccine shots to more than one million people, Planning and Development Minister Asad Umar announced on Tuesday.

“More than 76,000 vaccinations were carried out yesterday [Monday]. [The] total number of people registered so far is now over two million. 600,000 health care workers and more than 1.4 million 50 plus. Please register if you are 50 plus,” he said in a tweet.

Total vaccinations carried out so far crossed 1 million. More than 76 thousand vaccinations were carried out yesterday. Total number of people registered so far is now over 2 million. 600k health care workers and more than 1.4 million 50 plus. Please register if u are 50 plus.

The government launched a Covid-19 vaccination for the general public on March 10, starting with older people.

The drive began with a focus on the oldest people in the community, generally over the age of 80. “We will work our way down in coming days,” Dr Sultan said at the time.

Pakistan has not secured any supplies from vaccine manufacturers and is largely depending on the GAVI/WHO COVAX initiative for developing nations and donations from old friend China.

Meanwhile, in a report, Bloomberg claimed it would take a decade for Pakistan to inoculate 75 percent of its population, citing the global disparity between the number of jabs administered to people in rich and developing nations.

Based on Bloomberg’s vaccine tracker, the story showed countries like the US (328 million population), UK (66.65 million) and Israel (9.05 million) were likely to reach the 75 percent target within three months while others, including Pakistan (over 216 million), were expected to immunise the same size of their population in about a decade.

The vaccination drive has been plagued by slow registrations and a stuttering supply. The government received its first purchased tranche of Chinese jabs last week, with authorities vowing to secure more in the coming weeks.

The government portal on Tuesday registered 3,953 new infections after testing 46,665 samples, receiving back a positivity rate of 8.47 per cent — down from 9.97 per cent a day earlier.

Last month, the government reimposed a complete ban on gatherings across the country, including Islamabad, to curb the spread of the third wave of the coronavirus.

“Based on continuing increase in disease spread & fast pace at which hospital fill up is taking place, particularly critical covid patients, decided to further tighten restrictions,” Umar had tweeted.

The government also banned all social, cultural, political, sports, and other events including indoor and outdoor wedding ceremonies as health authorities also warned the third wave of the virus is more dangerous than earlier waves.

In another tweet on Tuesday, Asad said that the restrictions have started “to have an effect”.

“Initial signs of positivity slowing. However, due to momentum of last two weeks patients on critical care & mortality will stay at high levels for some time. Please follow SOPs & be safe,” he said.

Increased restrictions, broader lockdowns & stronger sop enforcement starting to have effect. Initial signs of positivity slowing. However, due to momentum of last 2 weeks patients on critical care & mortality will stay at high levels for some time. Please follow sop’s & be safe

ANOTHER DOCTOR DIES OF COVID-19:

He was 61. Dr Arshad was admitted at a private hospital and had been on ventilator for several days due to serious breathing problems, caused by deadly Covid-19 pandemic. He was performing his duty as a radiologist at a hospital in Faisalabad.

It is pertinent to mention here that recently 110 doctors of Lahore’s Services Hospital, have been infected with novel coronavirus and over 10 of them are said to be in a precarious condition.

Earlier on Monday, another doctor in Khyber Pakhtunkhwa (KP) succumbed to coronavirus on Monday, raising the death toll of doctors to have died in the province from the virus to 51.

According to the Provincial Doctors Association, Dr Muhammad Taufiq contracted coronavirus while performing his duties at the Police Hospital and was self-isolating at home. He breathed his last on Monday. The association further revealed that so far the deadly virus has claimed the lives of at least 51 doctors in the province, while seven doctors have died since February last.

Following his death, doctors in the province called upon the government to take emergency measures to ensure that the lives of these frontline workers were protected.

ISLAMABAD: In line with the government’s vision of promoting tourism across the country, Pakistan Telecommunication Authority (PTA) and the telecom operators are focusing on improving...
Read more
HEADLINES

ISLAMABAD: Minister for Aviation Ghulam Sarwar Khan on Monday clarified that there was no political involvement in finalizing the alignment of Rawalpindi-Islamabad Ring Road project. “If...
Read more
NATIONAL