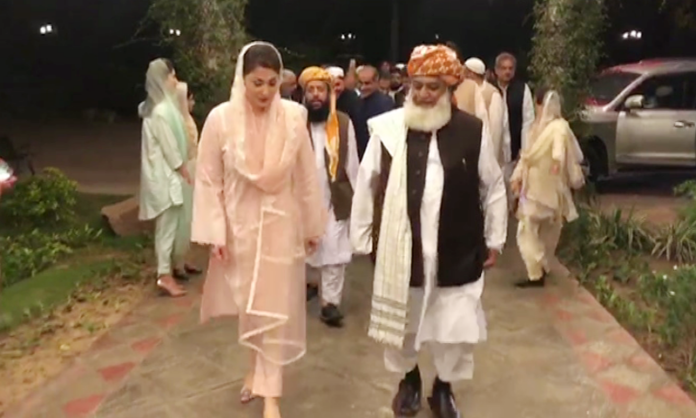 Fazl, who also heads Pakistan Democratic Movement (PDM), has been suffering from the fever for the past two days,” a report said citing JUI-F sources. “He is currently residing at his Dera Ismail Khan residence.”

It further said Fazl had sent his sample for coronavirus testing but the result came back negative.

“He has suspended political activities [for the time being] as he is unwell,” said sources. “Doctors have advised him to rest.”

On the other hand, Maryam too has caught “high fever” and is experiencing severe pain in her throat, said the PML-N spokesperson Marriyum Aurangzeb.

“Maryam has suspended her political activities for four days,” she said in a statement. “She has also gotten herself tested for coronavirus.”

The PML-N spokesperson said Maryam has been advised by her doctor to take rest, adding she attended a Lahore High Court (LHC) hearing the other day despite being sick.

Responding to Maryam’s comments against their party, Pakistan People’s Party (PPP) leaders on Sunday said that the PML-N VP’s tone was regrettable but their party knows how to respond to taunting remarks.

“We were sorry to see the word ‘selected’ being used to describe the PPP,” Marri said. “However, the PPP knows how to respond to every taunting remark.”

“There are people in PML-N who understand the delicacy of the occasion. We will continue democratic traditions inside and outside the parliament,” she said.

The PPP leader said that her party had reservations against Azam Nazeer Tarar, PML-N’s candidate for leader of the opposition slot in the Senate.

Advising Maryam, Sherry said that the PML-N VP must “reorient her political objectives” and “stick to [the aim of] ousting the Pakistan Tehreek-e-Insaf (PTI)-led government [instead of issuing controversial statements]”.

“We do not want the PDM to dissolve, therefore, the PML-N should refrain from issuing remarks that would empower the selected government,” she stressed.

Adding to the comments, Maula Bux Chandio said that the PDM is neither “anyone’s property” nor “a child’s play.”

“Therefore, saying that the long march will not take place is [inappropriate],” Chandio said.