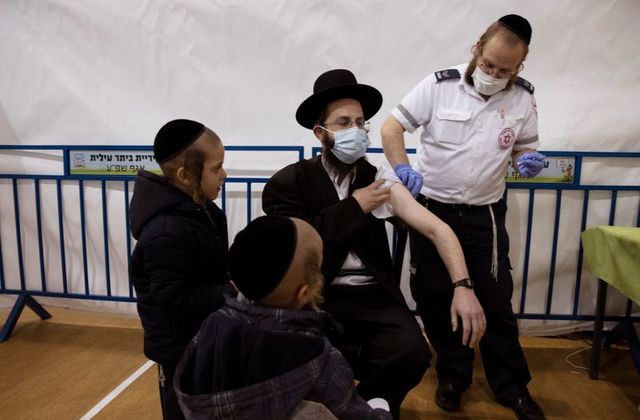 JERUSALEM: Outside the synagogue in Jerusalem’s Ultra-Orthodox neighbourhood Har Nof, a poster bears the name of Osnat Ben Sheetrit, a pregnant mother of four who died of Covid-19, and the words: “For the ascension of her soul, get vaccinated.”

The stark message is part of a health ministry campaign aimed at Israel’s 1.2 million Ultra-Orthodox Jews, the community that was the hardest hit by the coronavirus but also blamed by many secular Israelis for prolonging the pandemic by ignoring lockdown rules.

Now the rate of infections among the Haredim, as they are known in Israel, has dropped sharply, falling below the national average for the first time since the pandemic broke out. Cases of severe illness have also dropped, and vaccine take-up is at 72 percent, a comparatively high rate globally although still below the national rate of 86 percent in Israel.

The shift comes on the back of a decree from the Haredim’s leading rabbis, who for some hold far more authority in their communities than the state, to endorse the vaccine as Israel began its national roll-out in late December.

“I personally went to rabbinical classes and sat with the rabbis and with the public,” said Ran Balicer of Clalit, Israel’s biggest healthcare provider.

“The bottom line was that the rabbis have declared the rabbinical verdict that the vaccine is safe and effective and should be taken.”

The decision was a turning point for the community ravaged by the virus, where by February, one in every 100 Israeli ultra-Orthodox Jews above the age of 60 had died of Covid-19 — nearly six times higher than among their mainstream peers.

The Haredim, who make up about 12 percent of Israel’s 9.3 million population, comprise 28 percent of the total recorded 800,000 coronavirus cases, according to Eran Segal, data scientist at Israel’s Weizmann Institute of Science.

However, things are looking up. According to the health ministry, they now make up about the same share of new cases as their relative share of the population, even a little less, and have also seen the largest drop in severe illness than any other sector since a third wave peaked in mid-January.

Yet even as Israel’s world-leading vaccination rollout begins to haul the country out of the depths of the pandemic, there will be no quick end to the social and political toll on the Ultra-Orthodox.

“When a Haredi man gets on a bus everyone looks at him like he’s a leper so Haredim feel persecuted, there’s a lack of empathy toward them,” said Roni Numa, who heads the health ministry’s ultra-Orthodox task-force.

A protracted electoral stalemate sees Prime Minister Benjamin Netanyahu going into his fourth election in two years on March 23, with Ultra-Orthodox parties a mainstay of his right-wing coalition.

And although Netanyahu won plaudits at home and abroad for the vaccine rollout, prolonged lockdowns were crippling the economy.

Many blamed the Haredim, some of whose rabbis instructed followers to defy the law and send pupils to class, angering mainstream Israelis, whose schools remained shut.

“You could see (lockdown) violations in every Israeli sector […] but what happened in the Haredi community […] is that the violations came from the leadership,” said Yair Ettinger, a religious affairs analyst for Israel’s public broadcaster Kan.

In addition, Netanyahu was seen as ignoring blatant lockdown violations among the ultra-Orthodox for what critics say are political reasons.

The anger grew when evening news shows aired pictures of mass funerals attended by thousands of Haredim crammed together in the street, and social networks filled with videos of large weddings and holiday celebrations.

Numa said that on the ground the overwhelming majority of the Haredim kept lockdown. Ultra-Orthodox leaders said their community was being unfairly scrutinised.

Compliance, or a lack thereof, has not been the only factor in how the Haredim fared during the pandemic – it spread fast within the close-knit community whose large families live in densely populated neighbourhoods and towns.

Shunning secular culture, many ultra-Orthodox were slow to get information about the pandemic that other Israelis got through television, newspapers and the internet.

In addition, with seven children per average ultra-Orthodox family, most often living in a small home, lockdown was a struggle for many of the Haredim who did abide by it.

“We don’t have Zoom, it was all done over the telephone, every family had to get hold of phones and each child had to find a quiet space in the house,” Chadad said.

While most Israeli schoolkids were kept learning remotely in a virtual class, the Haredim remained cut off.

But Chadad said the worst was now behind Israel’s Haredim. “We are overcoming coronavirus. With God’s help, we’ll be a light unto the nations and return to normal life quickly.”