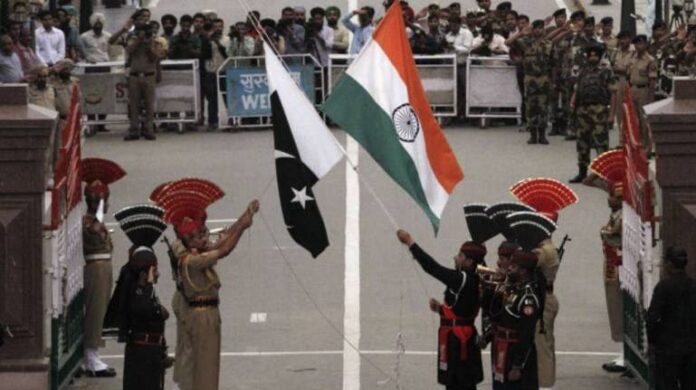 India and Pakistan reached a ceasefire arrangement at the Line of Control (LoC) and 8n all sectors with effect from midnight February 24/25, 2021.

It is a happy augury to know that India and Pakistan finally agreed for a ceasefire. It is welcome. The ceasefire announcement offers hope for peace in South Asia if the course of justice is followed and parties concerned undertake to abide by their commitments.

A lot more can be achieved from this ceasefire announcement if a focus is put on concrete proposals and those proposals are so framed as to admit alterations in the negotiating process without detracting from the principle involved. We believe that talks between the civilian government and the armed forces of India and Pakistan are the only way to resolve the Kashmir issue that has dominated the South Asian region for the last 73 years. We are maintaining this constructive position, despite the outrage caused, and the indescribable suffering inflicted on the Kashmirisby 900,000 Indian occupation forces.

Much ink has been spilled over the maneuvering of DGMOs that resulted in such an unexpected development. I do not believe such speculations are edifying. More enduring motivations must be explored to grasp the nettle of what the future may hold for peace and justice in Kashmir.

The people of Kashmir share a vision of peace and stability between India and Pakistan and of progress and prosperity in Kashmir. They want the people of India and Pakistan to live in peace, prosperity and happiness. That is why they believe that the Kashmir conflict has to be resolved through peaceful negotiations between India, Pakistan and the Kashmiri leadership, not through military means. They agree that lasting peace, harmonious relations and friendly cooperation will serve the vital interests of the peoples of both countries, enabling them to devote their energies to a better future.

Retired Indian Foreign Service Officer M.K. Bhadrakumar, said on 1 March 2021. “India’s past experience has been that the best means to push back at western pressure on Kashmir is by highlighting that we have a direct, bilateral line of communication with Pakistan and there is no need of gratuitous interference by third parties. Therefore, the sky is the limit, so to say, to build on the DGMOs’ statement — provided, of course, there is political will.”

I agree India’s sabre-rattling at this delicate moment might indicate its design to reap as much advantage as it can from diverting international attention from the realities of the Kashmir dispute and the principles of a healthy and viable international order involved in it.

The UN Secretary General and the world powers must intensify their watch over the situation in Kashmir and not be lulled into the belief that a ceasefire between India and Pakistan will soften the conflict or lessen the urgent need for mediatory initiatives. The policy that aims at merely defusing the situation, whatever that may mean, and not encouraging credible settlement, has not paid in the past. It is likely to do even less now.

In the past, Indian PM Dr Manmohan Singh Pakistani President Pervez Musharraf agreed at the UN on 24 September 2004 “to explore all the possible options to settle the issue of Kashmir.” Then Dr Singh said at the UN on 16 September, “What I do believe, I have also said that borders cannot be redrawn but we must work together to make borders irrelevant.”

Pakistani Foreign Minister Shah Mahmood Qureshi welcomed the agreement saying “It could be a good start for the future. India will have to abide by this ceasefire agreement with sincerity. How can we make progress on the issue of occupied Kashmir unless the environment is conducive.”

Indian Ministry of External Affairs, however, said on February 26: “India desires normal neighbourly relations with Pakistan. We have always maintained that we are committed to addressing issues, if any, in a peaceful bilateral manner.”

Four days later, Pawan Kumar Badhe, on behalf of the Permanent Mission of India said at the UN Human Rights Council in Geneva that Jammu & Kashmir was an integral and inalienable part of India.

We believe that ceasefire can be useful if it reflects a sense of urgency and prepare the ground for an earnest effort at the SAARC meeting to frame a step-by-step plan of settlement. Mere announcement of ceasefire will in no way defuse the situation permanently. Unintentionally though, it will mock the agony of the ceasefire rather than assuage it.

It is a matter of record that during the 73 years of the dispute, India has merely used ceasefires and even talks as a façade to evade settlement and ease internal and foreign pressure. Therefore, we believe that the ceasefire can be meaningful only if accompanied by practical measures to restore an environment of non-violence in Indian occupied Kashmir. This can be done by: a). The immediate and complete cessation of military and paramilitary actions against the civilian population; b). Withdrawal of the military presence from towns and villages; c). Dismantling of bunkers, watchtowers and barricades; d). Releasing political prisoners; e). Annulling various special repressive laws; f). Restoring the rights of peaceful association, assembly and demonstration; g). Permitting travel abroad without hindrance, Kashmiri leadership who favor a negotiated resolution; and h). Issuing visas to the Diaspora Kashmiri leadership to visit Jammu and Kashmir to help sustain the peace process, if and when it takes place.

A.S. Dulat, Former RAW Chief, has an interesting take on ceasefire announcement. He wrote in The Tribune on March 1. “The news from across the border is that Pakistan is working on a consensus for a settlement on the Line of Control, to which Manmohan Singh and General Pervez Musharraf had come close. It is not surprising, therefore, that Pakistan, which was undoubtedly shocked by the abrogation of Article 370, may now be reconciled to Articles 370 and 35A being internal matters of India.“

We know that there exist apprehensions that, whether on account of its present internal weakness or under external pressure, the Government of Pakistan has been forced to dilute its stand on Kashmir. If that is true, it will not end the dispute because the people of Kashmir will not consent to rule by a power that has visited death and destruction on them to brutalize them into submission.

An indication of misplaced focus is the wrong-headed talk about the Musharraf formula as suggested by A. S. Dulat. Musharraf’s formula amounts to completely giving up Pakistan’s stand and according legitimacy to what was achieved by the use of force.

The Musharraf formula talks about self-governance. It is problematic because under this plan, the people of Kashmir will be given self-governance without independence. Will people have a hand in the politics and influence who has the mandate to rule? Will they pass new laws which infringe on the limited self-rule the Kashmiris possess?  Will they be able to revoke Article 35 A, the Domicile Law, and suchlike? Where does self-rule begin and where does it end, if Kashmir does not possess sovereignty over its land?

The idea of self-governance is a deceptive and misleading term that gives an appearance of sovereignty without any substance. It is purely a mask. It prohibits further discussion on the subject of independence and promotes internalization of the Kashmir dispute. Without actual sovereignty for Kashmir, under the Musharraf formula, the people of Kashmir will have to accept the supremacy and rule of India over their lives, and the possibility of that being eroded by whatever whim, fancy or circumstance may intervene in the future.

US State Department spokesman Ted Price said, “When it comes to the US role, we continue to support direct dialogue between India and Pakistan on Kashmir and other issues of concern. We certainly welcome the arrangement that was announced that will take place— go into effect, I should say, on February 25.”

“The Secretary-General of the United Nations is encouraged by the joint statement and he hopes that this positive step will provide an opportunity for further dialogue,” a spokesperson said.

We appreciate the deep interest taken by the USA, the EU, the UN, and others to support the dialogue process between India and Pakistan to resolve the Kashmir dispute.

We want to emphasize, however, that as the dispute involves three parties – India, Pakistan and the people of Kashmir who are the most directly affected– any attempt to strike a deal between two without the association of the third, will fail to yield a credible settlement. The contemporary history of South Asia is abundantly clear that bilateral efforts have never met with success. Every arrangement that has not provided for a concrete course of action toward determining Kashmir’s status by the will of its people has only allowed the dispute to fester.

The UN Secretary General and the world powers must intensify their watch over the situation in Kashmir and not be lulled into the belief that a ceasefire between India and Pakistan will soften the conflict or lessen the urgent need for mediatory initiatives. The policy that aims at merely defusing the situation, whatever that may mean, and not encouraging credible settlement, has not paid in the past. It is likely to do even less now.

No settlement of the status of Kashmir will hold unless explicitly based on the principle of self-determination agreed by both India and Pakistan and supported by the UN Security Council.

Amid the raging pandemic in the southern Indian state of Maharashtra, the anti-terrorism squad arrested  on May 6, two persons (Jagar Jayesh Pandya and...
Read more
Letters

One wonders, why our political parties do not accept results of general election or by-elections when they lose. Devoid of the public pulse, they...
Read more
Letters

Why no let up in CoronaVirus?

The federal and provincial governments are doing their maximum possible including complete lockdown to check and control spreading of epidemic of Corona Virus and...
Read more
Letters

It is a bitter fact that a huge number of our young generation use narcotics. We can see a large number of heroin-addicts in...
Read more