In an initial statement, the police said it identified the suspects through CCTV footage, social media posts, and electronic media reports 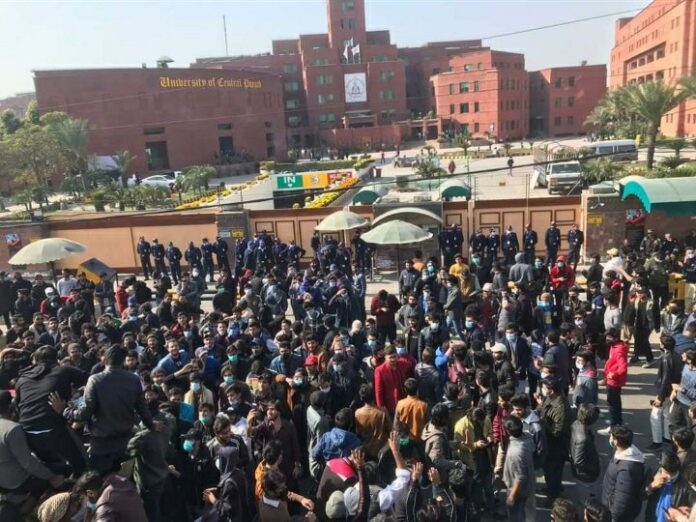 LAHORE: Punjab police on Wednesday registered a first information report (FIR) against hundreds of students on charges of vandalism and arson during a protest outside a university in the city’s Johar Town neighbourhood a day earlier.

Part of a series of nationwide protests seeking online assessments instead of on-campus exams due to the coronavirus pandemic, hundred of students enrolled in a private university had staged a demonstration outside the premises when the security baton-charged the participants, injuring many.

UCP guards beating the student who is now in ICU. We condemn this violence by UCP and demand action against UCP administration. #StudentsRejectPhysicalExams #RestoreStudentUnions pic.twitter.com/Gls9FaLBGh

Subsequently, a contingent of the police arrived on the scene and arrested as many as 94 students.

The complaint lodged at the Nawab Town police station nominated the 94 arrested and declared hundreds of their peers as unidentified under sections 452, 506-B, and 270 of the Pakistan Penal Code (PPC).

The accused will now be presented in a local court.

In an initial statement, the police said it identified the suspects through CCTV footage, social media posts, and electronic media reports.

An official said the prime suspect, Zubair Siddiqui, Lahore president of Progressive Students’ Collective (PSC), a student organisation, had incited the protesters to “attack” the building and was responsible for stone-pelting on the security staff.

Countrywide student bodies protesting for a week now say they attended online classes throughout the last year due to the pandemic and wanted to be examined under virtual conditions also.

They also claim universities had not completed the syllabi of different courses but now the institute’s administrations were pressing for exams.

The protesting students also called for a reduction in tuition fees since they did not attend classes in person and said that boarding schools should not be charging for lodging or meals.

The government on Monday asked universities to consult with the Higher Education Commission (HEC) to see if holding online examinations was possible.

In a series of tweets, Minister for Education Shafqat Mahmood while taking note of the students’ demands said: “This is a decision for the universities to make but I have asked HEC to consult VCs and see if it is possible given special circumstances this year.”

Some university students are demanding that their exams should be online as they have been studying online. This is a decision for the universities to make but I have asked HEC to consult VCs and see if it is possible given special circumstances this year. 1/2

On Monday, the PSC said Siddiqui was arrested by police from the university.

The PSC later tweeted that Zubair and some other students were “critically injured and have been taken to ICU [intensive care unit]” after they were allegedly baton-charged by police.

However, police denied reports of baton-charge. Saddar Division Superintendent of Police (Operations) Hafeezur Rehman Bugti said police “have not tortured [any students], and will not torture”.

He said no first information report (FIR) has been registered and police have asked the protesting students to hold negotiations with the university administration.

Bugti also said that nobody was arrested.