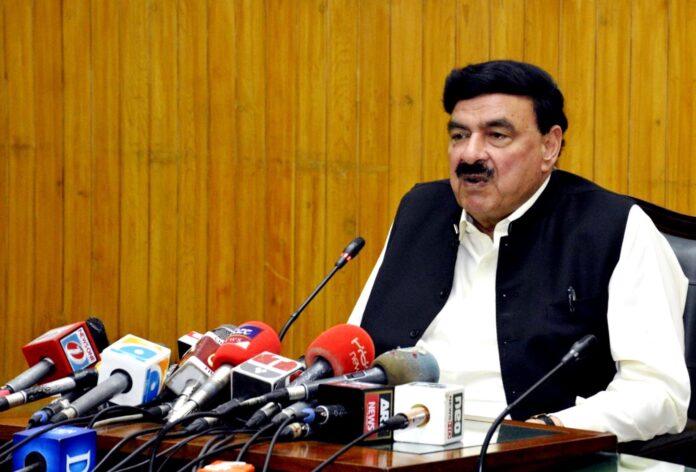 ISLAMABAD: Minister for Interior Sheikh Rasheed Ahmed on Wednesday said that the government will not create any hurdles in the way of the proposed long march of the opposition alliance to Islamabad to oust the Pakistan Tehreek-e-Insaf (PTI)-led coalition from the office.

“The opposition has the right to come to Islamabad, there will be no obstacle in their way,” the minister said while talking to an English daily. “That’s how a democracy works.”

When asked about the consultation between Jamiat Ulma-e-Islam-Fazl (JUI-F) leader Maulana Fazlur Rehman and Pakistan People’s Party (PPP) Co-chairperson Asif Ali Zardari and Pakistan Muslim-League (PML-N) supreme leader Nawaz Sharif to remove the government, Rasheed said that the Pakistan Democratic Movement (PDM) has backtracked from its original agenda, adding the alliance does not have a “clear strategy.”

“Even two members of the JUI-F are preparing to take part in the by-election for the national and provincial assemblies, while the party prepares for the [upcoming] Senate elections [in March],” he said.

“Their plan is to launch the march in a month or a month-and-a-half time, but [my advice to them is] they may do so now [if they wish so],” he added.

The minister said that the recent PDM protest in front of the offices of the Election Commission of Pakistan (ECP) in Islamabad was a “flop show”.

Regarding the Broadsheet episode, he said that it will turn into an important case for the country in the coming days. “It is going to become Panama two for the country,” he said.

In a press talk last week, Ahmed said: “After this [ECP protest], whatever small worry we had [about the long march] has dissipated. We did not even shut the metro bus service; that is [the level of your] political strength.”