In the era of cold war 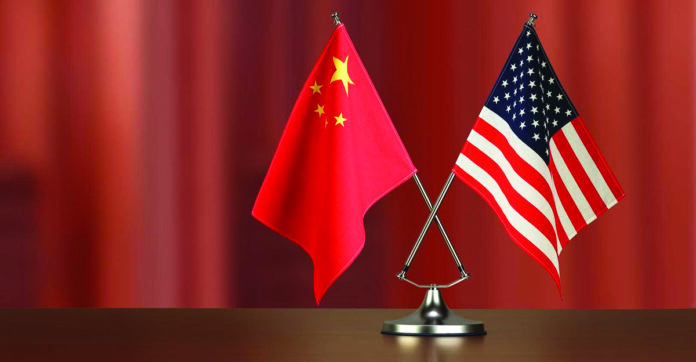 The world-leading superpowers, the United States and China have been precariously embroiled in a Cold war situation right now. The Cold war was an ideological conflict between Communism and Capitalism. This US-China Cold war is not an ideological but an old superpower and a new superpower that follow neoliberal ideals. The US, who is considering itself, is an ultimate superpower whereas China is an emerging economic power and challenge the US supremacy on the world.

Asymmetrically constrained relations are going to be more deteriorating once again since both of the states normalized its diplomatic relations more than four decades ago. The deterioration of Sino-US relations and the ongoing quarrel between Beijing and Washington are bringing these two superpowers closer to the new cold war. The escalation of competition between Beijing and Washington may bring huge losses. Hence, the situation is looking less like a trade war and more like the new cold war by current escalating assertions.

Throughout history, the aggressiveness of American policies primarily affected the third world countries. The US policies are self-indulgent, unsustainable and threaten the survival of mankind. Nonetheless, The United States has been involved in too many wars, and there is no evidence that China is directly involved in any war due to its co-operative policies. Concurrently, China is reversing desertification, developing non-fossil fuels, alternative technologies, aquaculture, and more eco-friendly, mass transport and industrial system. Therefore, an economically, militarily, diplomatically and politically strong democratic country, the US – has an imminent threat from the economically and technologically rising communist state. However, China is the United States largest trading partner, The Trump administration impose tariffs on Chinese imports in 2018. To retaliate, China devastated the US imports essentially. Although China’s economy is heavily dependent on the US, whose relationship is now under considerable strain, the competition that began with trade and technological tensions has transcended the economic realm. While the economic competition shifted towards the geopolitical competition, tensions have oscillated from co-operation to competition, which could lead to a dangerous confrontation between the liberal democracy and the authoritarians who saw the other as an incapable foe. If China begins to actively participate in supporting authoritarianism and undermining democracy around the world, the land alliance system led by the United States will begin to confront China’s autocratic allies.

Technologically, both states are very powerful, despite that, the advancement of technology increases many vulnerabilities, but the Chinese aspiration to become a global leader, in terms of technology, indirectly imposing a threat to the US national security. There is one particular Chinese firm, “Huawei”- Huawei is the world’s biggest telecommunication company.

President Trump announced the “Decoupling” of relations with China- claims that China’s trade is unfair, to restrict Americans access to the Chinese market and manipulate their currency. Decoupling from China is a completely difficult process because thousands of American companies are still operating in China. For these companies, it is a difficult decision to get rid of the Chinese market. Other than that, the whole world is suffering from the Covid-19 pandemic, commonly known as ‘Coronavirus’. Which originated in China, has devastated the entire global economy. Initially, the U.S. Ex-President “Donald Trump” and Secretary of State, “Mike Pompeo” started to blame China to the outbreak of coronavirus by boycotting Chinese products, and by using such terms “China Virus” and “Wuhan Virus” in their statements and speeches, to retaliate such allegations, China’s administration denied such statements and criticized the US government to the real reason of the outbreak of coronavirus by the carelessness of US soldiers. Additionally, for Chinese citizens who are working in the media field in the United States, the Trump administration accused the Chinese media of being propagandists and urged other countries to reject Chinese aid and products. Secondly, the Ministry of Justice accused Chinese hackers of stealing information about virus vaccines. China strongly condemned the actions of the United States, called its unprecedented escalation, and vowed to retaliate.

Technologically, both states are very powerful, despite that, the advancement of technology increases many vulnerabilities, but the Chinese aspiration to become a global leader, in terms of technology, indirectly imposing a threat to the US national security. There is one particular Chinese firm, “Huawei”- Huawei is the world’s biggest telecommunication company. The US and its allies are afraid that Chinese would hack their sensitive information, such as location data; hence they blacklisted the tech company under certain national security concerns. Then came the “Tiktok” fiasco, and it continues.  The US government is concerned about TikTok’s uncontrolled existence in the United States, the data it may collect about American consumers and how it will handle it. This is understandable. However, China, and more importantly, other countries in the world, believes that the way the United States handles this issue is unreasonable. However, such technical competition can last for several years. Similar competitions are underway in the field of artificial intelligence, digital currency and even the “Covid vaccine”. However, the lesson of the first Cold War is that the ultimate test of any national security policy is its first concern.

Interestingly, China does not aggressively response against such actions but quickly moved towards the next goal of connecting the world, for example, through the “Belt and Road Initiative” (BRI). Ostensibly, the American empire is declining and may cause serious damage in a period of deteriorating time, in order to cause as much damage as possible and destroy as many countries as possible.

Nadir Ali
The writer is a student of Strategic & Nuclear Studies at the National Defence University, Islamabad. He can be reached at [email protected]

Sir, this is with the reference of the letter ‘ Unequal salaries’ by Faheem Hussain, published in Dawn. The salaries of the government servants...
Read more
Letters

The world’s scientists are working hard for a vaccine research as soon as possible. Since the virus is widely spreading. Very recently, The Minister...
Read more
Letters

Pakistan is a country where favoritism and nepotism mostly rely in the educational departments. This is when a person is treated unfairly or unequally...
Read more
Letters

There have been various pop-up messages one can easily get from Google about the ongoing climate crisis fight. The various sources have just confirmed...
Read more
Comment

Life appears to have turned itself upside down as a result of the pandemic. In Pakistan this applies to the urban setting more than...
Read more