He has been admitted to the hospital due to deteriorating health in the past as well. 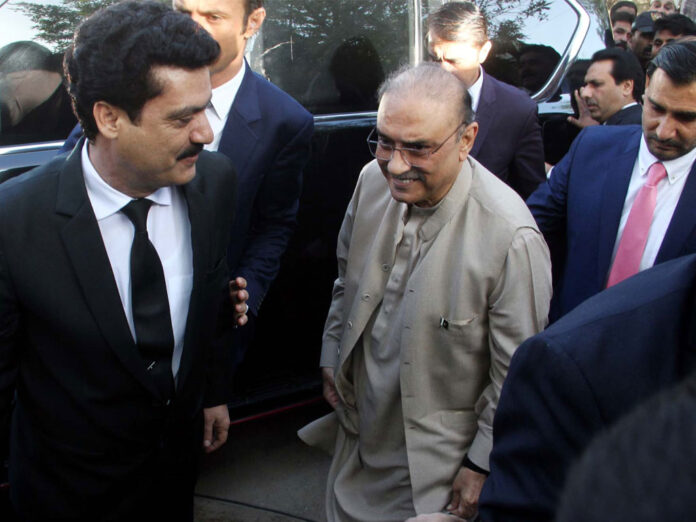 A team of doctors conducted a series of tests of the former president following his medical check-up. Per them, he had a backache as well as pain in his spinal cord.

They further said Zardari’s blood pressure was not stable besides he was also facing difficulty in breathing.

Doctors even temporarily barred visitors from meeting the former president, except his family members. He has been allowed only one attendant.

He has been admitted to hospital due to bad health in the past as well. In October, he was shifted to a private hospital in Karachi after he felt “unwell”.

Zardari, who is nominated in multiple corruption cases filed by the National Accountability Bureau (NAB), is out on bail granted by the Islamabad High Court (IHC) on medical grounds in 2019.

Recently, he was indicted in a mega money laundering, Park Lane properties and Thatta water supply references instituted by the bureau.

During a hearing of the bail petition filed by Zardari, his legal counsel, Farooq H. Naek, told the court that the former president “is a chronic patient suffering from multiple ailments.”

“He is a heart patient having three stents in his heart. He has a Holter Monitor attached to his chest so that the doctors are able to check and note variations in his heartbeat and blockages in his arteries. The petitioner is a patient of ischemic heart disease, which means that his heart may have an inadequate supply of blood and oxygen”.

Naek had said Zardari also “suffers from various other ailments such as cervical and lumbar spondylosis, sensory and motor neuropathy with impaired proprioception”.

ISLAMABAD: Pakistan reported less than 3,000 coronavirus cases in a day after almost two months, as 2,869 new infections were reported during the last twenty-four...
Read more
HEADLINES

ISLAMABAD: The UN Special Coordinator for the Middle East Peace Process added his voice to calls for calm in the Occupied Palestinian Territory late on...
Read more
HEADLINES

ISLAMABAD: The Civil Aviation Authority (CAA) in a revised policy for global air traffic allowed the foreign airlines to operate an additional 30 per...
Read more
HEADLINES

The Kingdom of Saudi Arabia (KSA) has issued a list of vaccines that travellers must have taken before entering the region; however, it has...
Read more
HEADLINES

The Central Ruet-e-Hilal Committee (RHC) will meet in the federal capital on Wednesday under the chair of RHC Chairman Maulana Abdul Khabir Azad to sight...
Read more
- Advertisment -

May 12, 2021
The Kingdom of Saudi Arabia (KSA) has issued a list of vaccines that travellers must have taken before entering the region; however, it has...