The report says the pandemic is making it difficult for 1.9 billion people to afford healthy diets 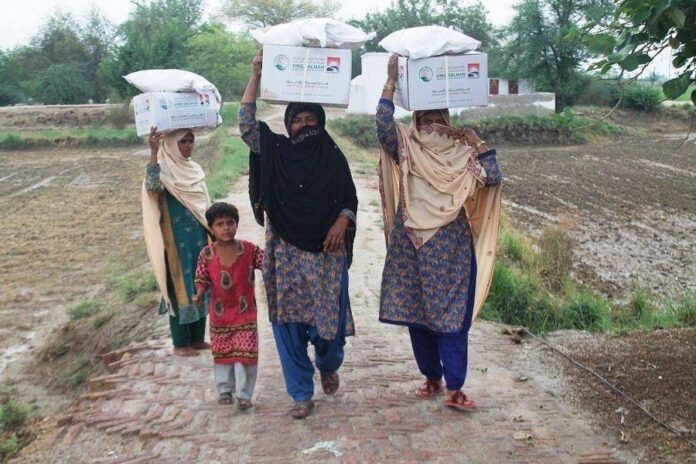 LAHORE: United Nations agencies are warning that more than 350 million people in the Asia-Pacific region, including in Pakistan, are going hungry as the coronavirus pandemic destroys jobs and pushes food prices higher.

The report issued Wednesday by four agencies says the pandemic is making it difficult for 1.9 billion people to afford healthy diets. It follows an earlier report that forecast that in a worst-case scenario that 828 million people might suffer from acute hunger because of the crisis.

The latest estimate is that nearly 688 million people globally are undernourished, more than half of them in Asia. The largest share is in South Asian countries like Afghanistan, where four in 10 people are malnourished.

The report said that five of the 45 countries requiring food assistance were in South, Southeast or East Asia. They include Bangladesh, Afghanistan, Pakistan, North Korea and Myanmar.

Over the longer term, food insecurity had been improving before the pandemic hit. The report urged governments to transform food systems to ensure all are able to have nutritious diets. It called for a multidimensional approach ensuring better health care, water and sanitation, education and social protections.

The report is mostly based on data up to 2019 before the pandemic struck. But it also estimates that an additional 140 million people were likely to have fallen into extreme poverty in 2020 due to the impact of virus outbreaks and lockdowns. By the end of last year, some 265 million were estimated to be facing acute food insecurity.

A key factor is food affordability, a problem in wealthy nations like Japan as well as impoverished places like East Timor and Papua New Guinea, said the report issued by the UN Food and Agriculture Organisation, UNICEF, the World Food Program, and the World Health Organisation (WHO).

Disruptions and job losses due to the pandemic are preventing families from getting enough to eat in many places. That’s evident in the long lines seen at food banks even in the United States.

In India, broken supply chains and transport problems, especially during pandemic lockdowns, have prevented surplus grain stocks from reaching all those in need. Day laborers and migrants are the most vulnerable, despite a massive public distribution system that entitles 75% of the rural population and half of those living in cities to subsidised food grains.

Since eligibility for such programs is based on a census that is nearly a decade old, many urban poor and migrants cannot tap those resources.

Across Asia, high prices for fruits, vegetables and dairy products have made it “nearly impossible” for low-income families to have healthy diets, the report said. FAO data show food prices rose to their highest level in nearly six years in November.

Many in the region instead end up consuming high-calorie, cheap processed foods that contribute to problems with obesity and diabetes but lack vitamins and minerals.

Data in the report show that it is more expensive to eat a healthy diet in Thailand, Laos, Bhutan and Indonesia, at about $5 per day, than it is in New Zealand and Australia, at less than $3 per day.

A nutritionally adequate diet tends to cost $2 to $3 per day in most countries, rich or poor, but is more expensive in Japan and South Korea. In most countries, the cost of a nutritious diet is two to three times that for a one just sufficient to provide enough energy.

The cost of long-term deprivation is seen in higher rates of death and illness. Tens of millions of children suffer from wasting or stunting, failing to grow well and unable to achieve their full potential.