Premier regrets the suffering of tribal areas due to militancy, says now is the time to compensate by offering facilities in all areas of life 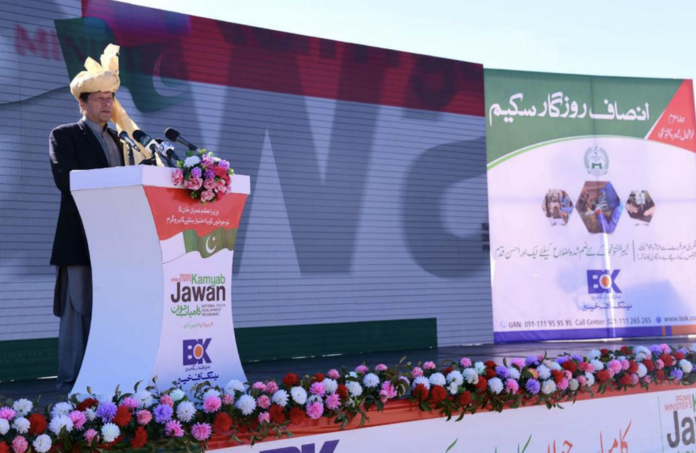 Addressing a gathering of tribal notables at cheque distribution ceremony under Kamyab Jawan Programme, the premier said that the launch of high-speed internet was in line with bringing development in South Waziristan, an area that had long suffered the brunt of terrorism.

Prime Minister Imran stated that internet access in South Waziristan was previously denied due to security situation with the major apprehension that technology could be used by miscreants backed by India.

However, he said, after consultations with Chief of Army Staff (COAS) General Qamar Javed Bajwa and Inter-Services Intelligence (ISI) Chief Lt Gen Faiz Hameed on security clearance, it was decided to launch the services to facilitate the residents particularly students as most of the educational institutions had started online classes.

PM Imran said that the vision of his government was to uplift the underprivileged areas of the region and provide best opportunities to the local population in areas of education, health and employment.

He regretted those tribal areas had suffered immensely due to militancy in the past and said it was the time to compensate them by offering them facilities in all areas of life.

He termed the youth as “biggest asset” of the country and stressed that technical education would help them gain capabilities to meet the challenges of the contemporary world.

For the uplift of tribal youth, he said, employment opportunities would be provided to them for their mainstreaming in national development.

The premier said that more funds would be diverted for South Waziristan under Kamyab Jawan Programme, aimed at ensuring self-reliance of youth.

He acknowledged the tremendous sacrifice of the tribal people for the soil, dating back to their resistance during British Raj and fighting for the freedom of Kashmiris in 1947.

He paid tribute to locals for supporting him in materialising the difficult task of the merger of tribal areas with Khyber Pukhtunkhwa (KP), adding that the time would prove that it was the “best decision”.

PM Imran said that the government would soon open educational facilities in South Waziristan including universities and technical institutes.

He assured that the demands of the local population would be met and that their problems would be resolved on priority basis.

He directed the KP governor and the chief minister to hold consultations with tribal elders in sorting out the demands relating to sub-division of districts.

He also asked the chief minister to ensure the problems related to the construction of dams to overcome the shortage of water.

“The government will continue to take steps for your uplift, no matter whom you voted in elections,” he told the gathering, vowing to extend support to them in all areas.

He said that poor students would be given scholarships and financial assistance to complete their education under the Ehsaas social welfare programme.

The prime minister said that the government was going to bring “olive revolution” in South Waziristan, a terrain best suited for the cultivation of the crop.

He said that the olive project would boost local production and generate revenue for locals.

He also said that road infrastructure in tribal areas would be upgraded to lessen distances among far-flung districts.

The premier announced that every household in South Waziristan would be provided health insurance of free medical treatment up to Rs0.7 million.

To tribal elders, he assured that the tradition of respect would be ensured with their inclusion in the main decision body of jirga.

Under the project, the Cadet College will get two new hostels, teachers’ accommodation, clean water supply, a mosque and a multi-purpose hall.

The expansion of Cadet College Wana will not only benefit the local students but also belonging to other parts of South Waziristan.

In addition, the premier laid the foundation stone for widening and repair of Tanai Gul Kuch Road. The road will ensure better transportation facilities to the adjoining population.

He visited the Frontier Constabulary (FC) Headquarters. He paid respects to the martyrs and laid a wreath at the martyrs’ memorial. The prime minster also planted a sapling on the occassion.

Special attention being paid to the former tribal areas has been marred by a recent, intensified wave of militant attacks. The Afghanistan-based Tehreek-e-Taliban Pakistan (TTP) has executed a number of attacks on the army. In October, a convoy of security forces was attacked with improvised explosive devices near Razmak, resulting in the martyrdom of a captain and five soldiers. The TTP had claimed responsibility for the attack.

The militants, most of them are based in Afghanistan and sponsored by India, have stepped up attacks on security forces in the merged tribal districts, particularly in North and South Waziristan, raising fears of a revival of their insurgency and a return of lawlessness as brighter prospects for peace in Afghanistan herald shifting alliances.

The border region was for years a haven for militants who fled the US invasion of Afghanistan in 2001. But the Pakistan Army cleared out the strongholds in a 2014 offensive, Operation Zarb-e-Azb, driving most of the terrorists into Afghanistan.

But since March, al Qaeda-linked TTP, facing the risk of losing havens on the Afghan side of the border if their Afghan Taliban allies make peace there, have unleashed a wave of attacks on the security forces in the border region.

During his previous visit in April 2019, Imran had said that some elements operating in the region were receiving money from abroad to push the youth of the tribal districts towards unrest.

Such elements had been trying to cash in on the problems being faced by locals, he had said apparently in a veiled reference to the rights movement, Pashtun Tahaffuz Movement (PTM).

“These people are receiving finances from abroad. And leaders involved in corruption are also providing them support to escape cases.”

Speaking to journalists in South Waziristan, PM Imran said that the proceedings of the foreign funding case should be aired live on TV and party heads should attend the hearings.

“I can put it to a challenge that PTI is the only political party that has been involved in political fundraising,” he said, adding that the country runs on remittance by overseas Pakistanis.

Slamming the opposition, he said that Pakistan Democratic Movement (PDM) and JUI-F chief Maulana Fazlur Rehman use students of seminaries to blackmail governments.

“How does he [Fazl] own properties worth billions of rupees?” the premier asked, adding that that the PDM chief was protesting with the sole aim of getting a concession under the National Reconciliation Ordinance (NRO).

“They do not understand the nation’s mindset. Our people are politically aware. They will not come out to back such thieves,” PM Imran said.

The prime minister said that he was thankful to the opposition for highlighting the foreign funding case and now sources of all parties’ funds should be made public.

It is now the opposition parties’ turn to reveal the source of their funds, the prime minister stressed.

Four children got injured in an explosion outside the office of the deputy superintendent of police (DSP) in Ghotki’s Ubauro on Sunday. According to the...
Read more
- Advertisment -