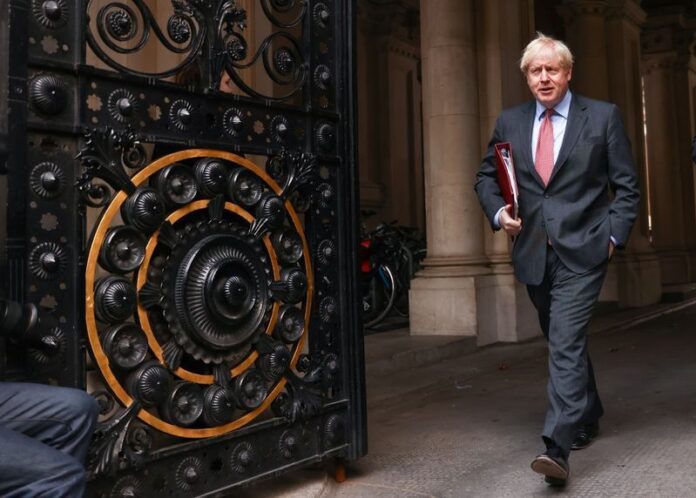 With growing fears of a chaotic no-deal finale to the five-year Brexit crisis when the United Kingdom finally leaves the EU’s orbit on Dec. 31, the dinner is being cast as a chance to unlock the stalled trade talks.

A British government source stressed that a deal may not be possible, as did EU chief Brexit negotiator Michel Barnier. Ireland also signalled it was pessimistic about a deal.

“The EU has to move,” Michael Gove, a senior minister in Johnson’s government dealing with Brexit issues, told Times Radio.

While Gove refused to give odds on a deal, he said that often a one-on-one meeting between leaders could result in a breakthrough.

“It is often around the table, when you have two political principals one-on-one, that you can often find a way through,” Gove told the BBC.

Failure to secure a deal would snarl borders, shock financial markets and sow chaos through supply chains across Europe and beyond as the world faces the vast economic cost of the COVID-19 pandemic.

The British pound was flat against the dollar at around 1.3369, after three straight days of losses. It stands around 1% off 2-1/2 year highs hit at the end of last week. Overnight implied volatility — a measure of expected price swings — rose to a new 8-1/2 month high of close to 25%.

EU chief negotiator Barnier said on Tuesday he believed a ‘no-deal’ split in ties with Britain at the end of the year was now more likely than agreement on a trade pact, sources in the bloc said.

A diplomat and an official in Brussels, speaking on condition of anonymity, said Barnier made the remark at a meeting with the European affairs ministers from the 27 EU states. Barnier added that it was time for the bloc to update its no-deal contingency plans, they said.

Britain said on Tuesday it had clinched a deal with the EU over how to manage the Ireland-Northern Ireland border, and would now drop clauses in draft domestic legislation that would have breached a Brexit withdrawal agreement signed earlier this year.

Gove said the deal on Northern Ireland opened up “a smoother glide path” towards a possible deal. He added that if a deal was not done finance minister Rishi Sunak would take steps to ensure British businesses were competitive.

Gove confirmed he was helping to coordinate the government’s attempt to prepare for the scenario of Brexit without a trade deal during a surge in winter Covid-19 cases.

Irish Prime Minister Micheal Martin said he is “on the pessimistic side” about the chances that Britain and the European Union will reach a consensus in the coming days on a free-trade agreement, the Irish Times reported on Wednesday.

Mariam Zermina
The writer is a member of the staff.