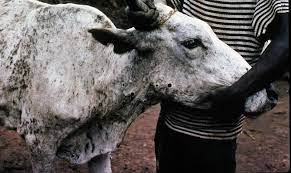 RAWALPINDI: The Punjab government had provided a Rs 1.5 billion grant to prevent the second possible wave of lumpy skin disease in animals.

He said the vaccine would be administered free of charge to livestock by visiting farms across the province.

“Lumpy skin virus causes disease in cattle and some wild animals, reducing milk production, abortion and barrenness in animals,” he said, adding that the disease was not transmissible to humans, and milk and meat were safe for humans if used according to hygiene principles.

Additional Director of Livestock Rawalpindi, Dr Naveed Sahr Zaidi, said that to prevent lumpy skin disease, the transportation of animals should be limited, and the affected animals must be kept separate from other animals.

It may be mentioned that thousands of animals lost their lives due to lumpy skin disease last year, while the farmers and other people associated with the livestock businesses faced a huge loss.